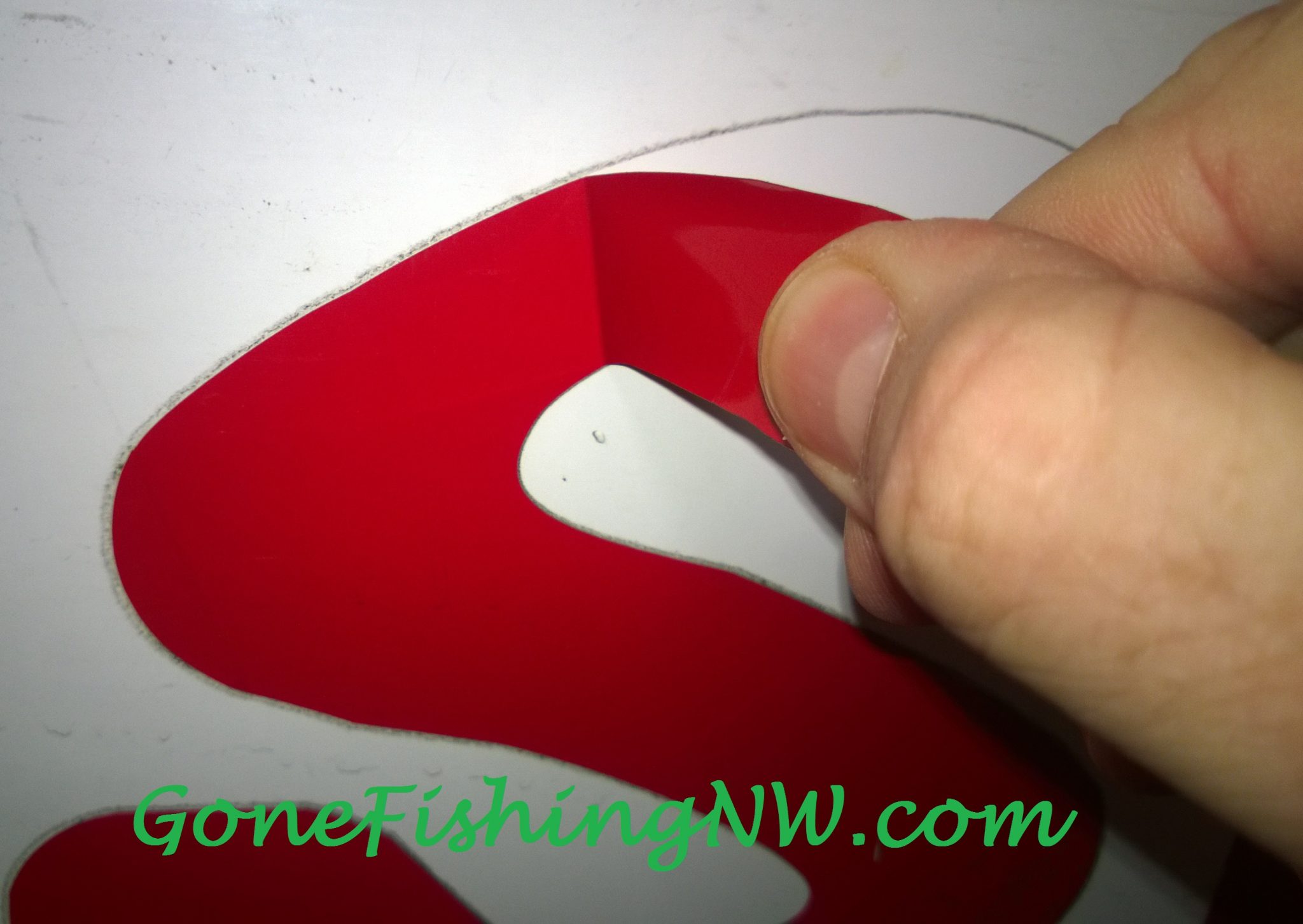 My boat has vinyl stickers on it from the previous owner which say “G Loomis Special”.  While I like G Loomis rods, I don’t feel like advertising for them.  So I’ve wanted to remove the stickers, but not have to pay to get a completely new vinyl wrap (which I probably need to do eventually anyway).

After some research and experimentation I’ve found a good way to remove the stickers while leaving the underneath vinyl intact.

Here is what it looked like when I started. 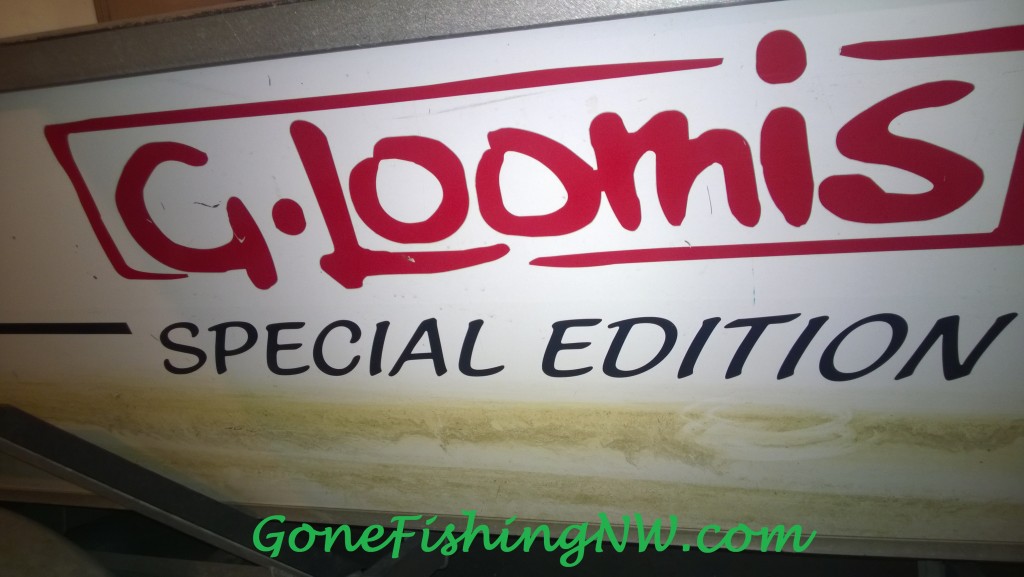 Early experiments using a heat gun showed that the heat really didn’t help.  Any improvement in removing the stickers was counteracted by the stickers being more stretchy and breaky.  Too much heat also affected the vinyl underneath.

I also tried using a tool which attached to the drill.  While it removed the stickers easily it also removes  vinyl underneath.

What I found worked best is a razor blade and some patience.  Make sure to have some extra blades, as it keeps it easy to use sharp blades. I found it useful to have a little holder, like this one: 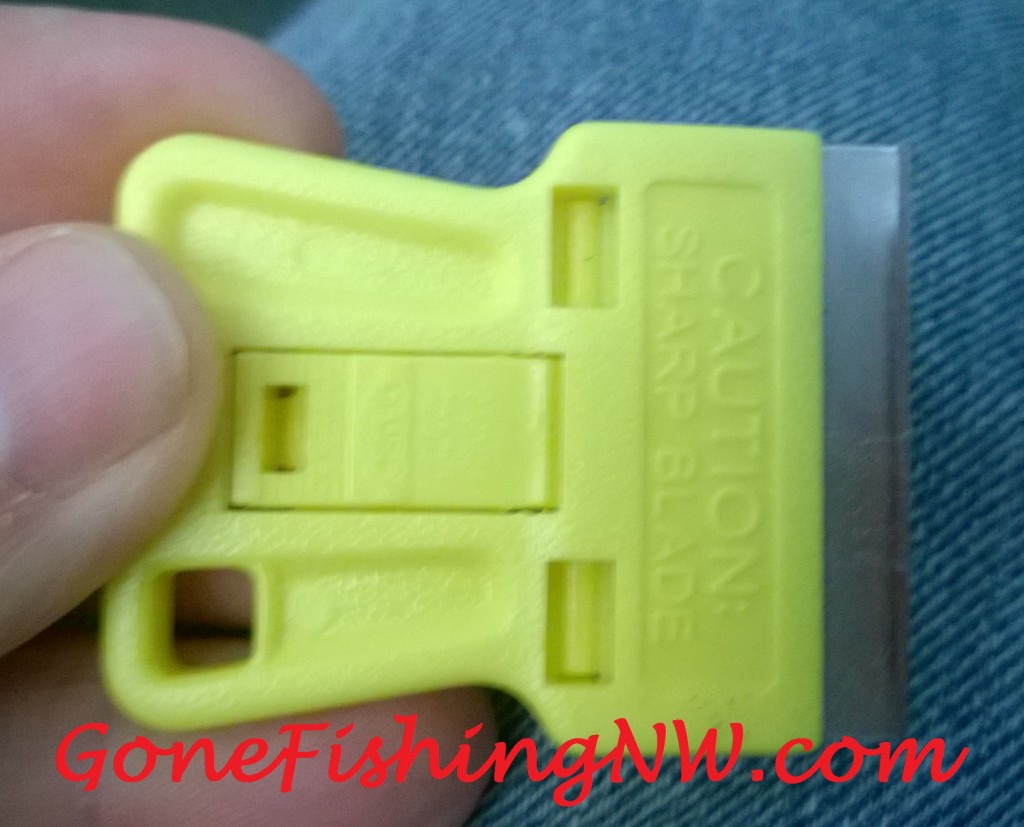 Then find the edge of one of the stickers.  Carefully use the razor blade to lift a enough of it up so you can grab it with your other hand. 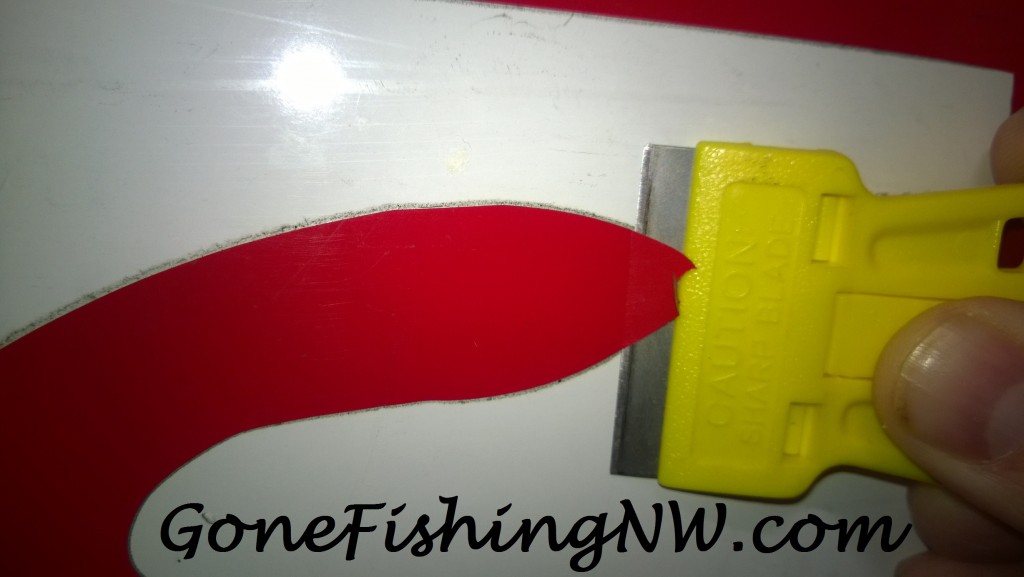 Then slowly pull the sticker off 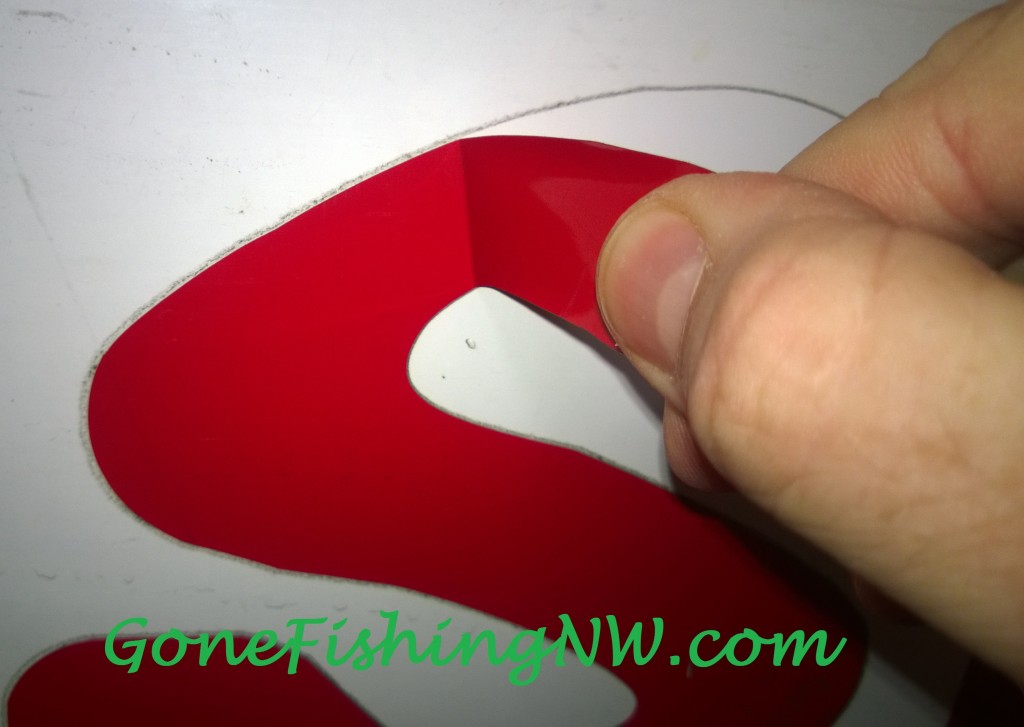 Very seldom will you be able to get the entire sticker off before it breaks, like this 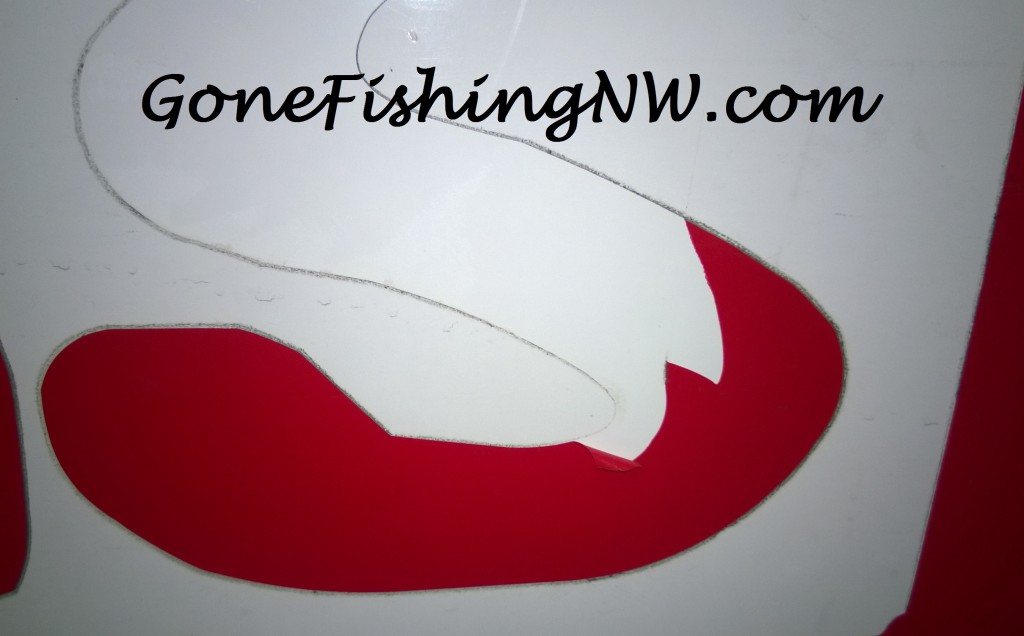 When this happens, no worries.  Just use the razor blade again to get started again.

Eventually I had all the stickers off.  You’ll notice the outline of the sticker remains.  This is largely dirt that was stuck along the edges.  This stuff will come off as we do the final steps. 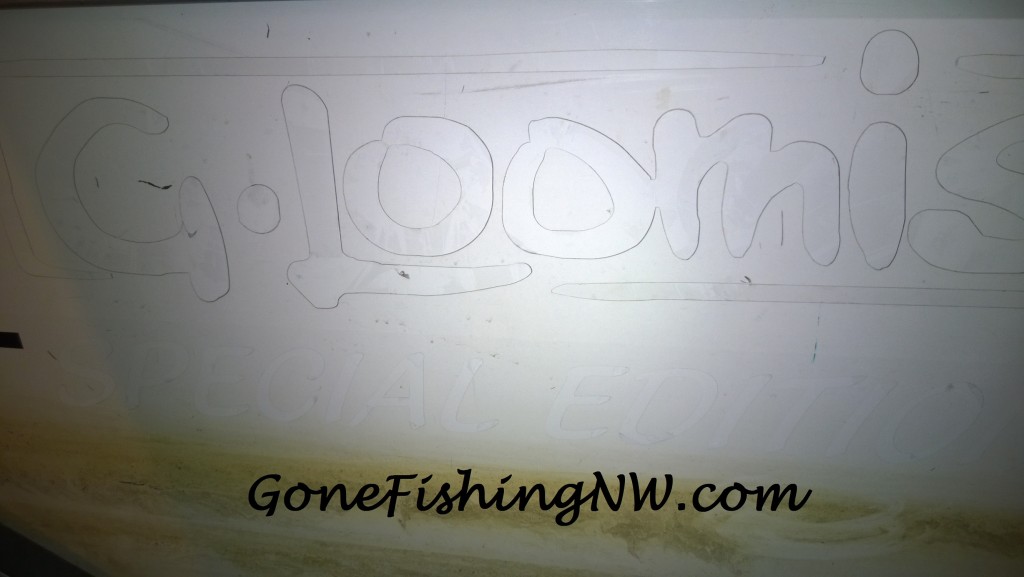 While hard to see in the picture there is also some adhesive residue stuck to the boat.  I used Goo Gone to remove that.  I squirted the Goo Gone one and then let it sit for a few minutes.  The longer you let it sit the better it seems to work.

Then with a some soapy water and a rag I washed off the Goo Gone.  For stubborn sections attacking it with a stiff bristle brush helped.

The process of removing the adhesive also cleans up much of the dirt outline.  A little more work with the soapy water can get anything that is left.

And here it is all done. 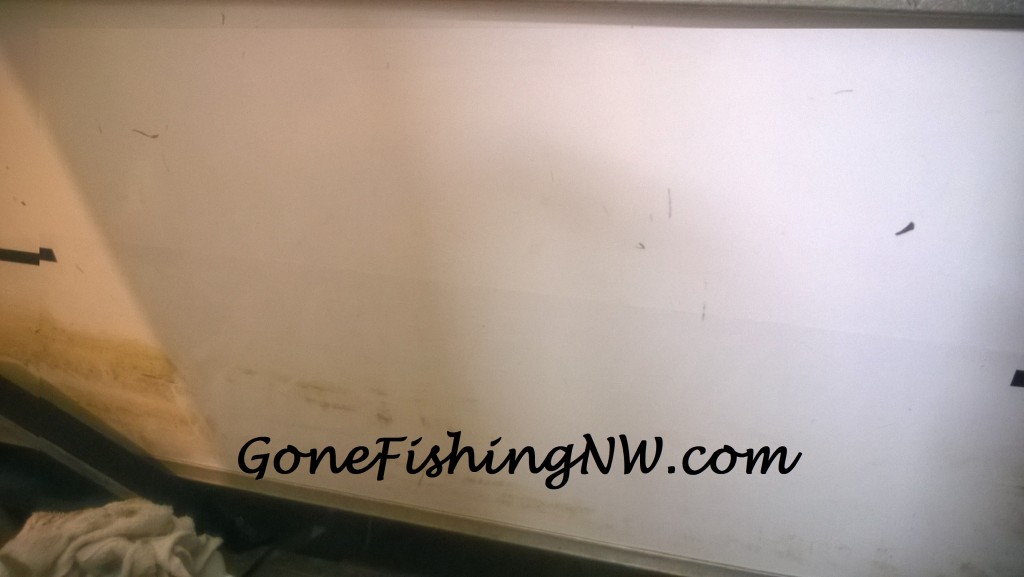 You’ll notice a little mark on the right side of the picture.  That is from a time when the underneath vinyl come up with the sticker.  That will happen from time to time.  Just keep an eye out, and when it happens stop pulling from that direction.

I’m hoping the new stickers I’m planning on putting on will cover that up.  If not, no worries, as the white vinyl wrap is nicked in a few other places already anyway.