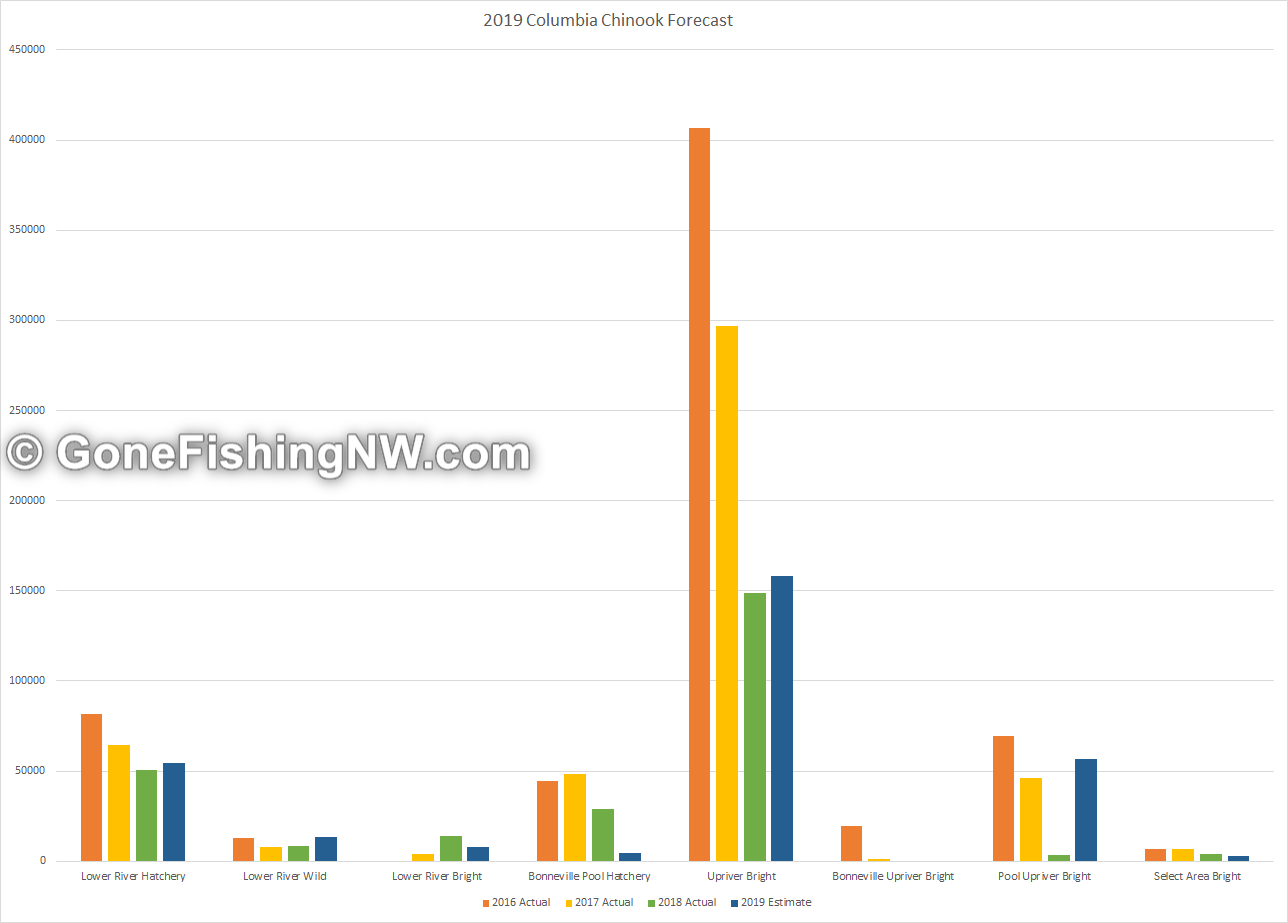 Another year and another set of salmon forecasts from the WDFW.  Generally speaking forecasts are down again.  No one knows quite what is going on, but there are a multitude of things which no doubt have impact – habitat destruction, ocean conditions, fish harvest (by all parties), increased predation, etc…  What is clear is that unless something changes, the trend is likely to continue.

Well, enough of that gloom and doom.  There are a few bright spots on the otherwise dark horizion which will provide fishing opportunities – especially for those willing to travel beyond their local waters.

A few things to keep in mind while looking over this article.  First is that I haven’t reconciled the data against any regulation updates, so check the regs to make sure your favorite area is open for fishing and not just assume because the numbers look reasonable.  Second this is a summary which highlights some specific systems and fisheries.  For the full forecast please refer to what the WDFW has published.

Lets start with the king of fish, the mighty Chinook salmon also known as King salmon.

In Puget Sound, the returns to all the river systems are down, except for the Skagit which actually is up by several thousand.  Although lower than previous years the Nooksack, Snohomish, Green, Deshutes, Nisqually and Hood Canal all have ample returns to support a fishery.

The Columbia river is a mixed bag with some stocks being down, and others up slightly.  If you are aiming for the columbia then Upriver Brights are what you should play the odds for.

Coastal Coho Salmon, or Silver Salmon, are generally doing well with Grays Harbor and Willapa Bay expecting significantly larger returns than last year.  Some stocks of Puget Sound salmon are also doing better than last year, especially those at the north or south ends of the Sound such as the Nooksack, Green and Puyalip.  However right in the middle, the popular Snohomish fishery sees yet another decline.

For Sockeye Salmon, or Red Salmon, it is quite similar to last year.  The forecasts for Lake Washington and Wenatchee are sigificantly below what would be required for a fishery.  The Okanogan return is better, but far from the large numbers of several years ago.

The forecast for Baker River sockeye is about the same as last year, however Baker Lake will probably get less than last year because the hatchery take has been increased.  Out of the 33,737 fish forecasted, the hatchery will take 9,000 of those – leaving 24,737 for harvest.  The tribe will has a quota of half that, which they will net in the river.  That leaves roughly 12,000 fish destined for the lake.

2019 is an odd year, which means Pink Salmon – also know as Humpies – will be returning to Puget Sound.  This year the forecast is just over half of what it was in 2017 – which was significantly down from years previous.  Instead of millions of fish, only 600 thousand are forecasted.  The WDFW has already announced lower limits than previous years.

If you are interested in the details about the salmon forecasts, please see the WDFW’s North of Falcon page.  North of Falcon is the name of the salmon season setting process and information about that process, as well as the forecasts can be found there.

If you are looking for information on specific locations, techniques or gear, then checkout http://gonefishingnw.com/  Information is organized by categories and can be searched for via keywords.