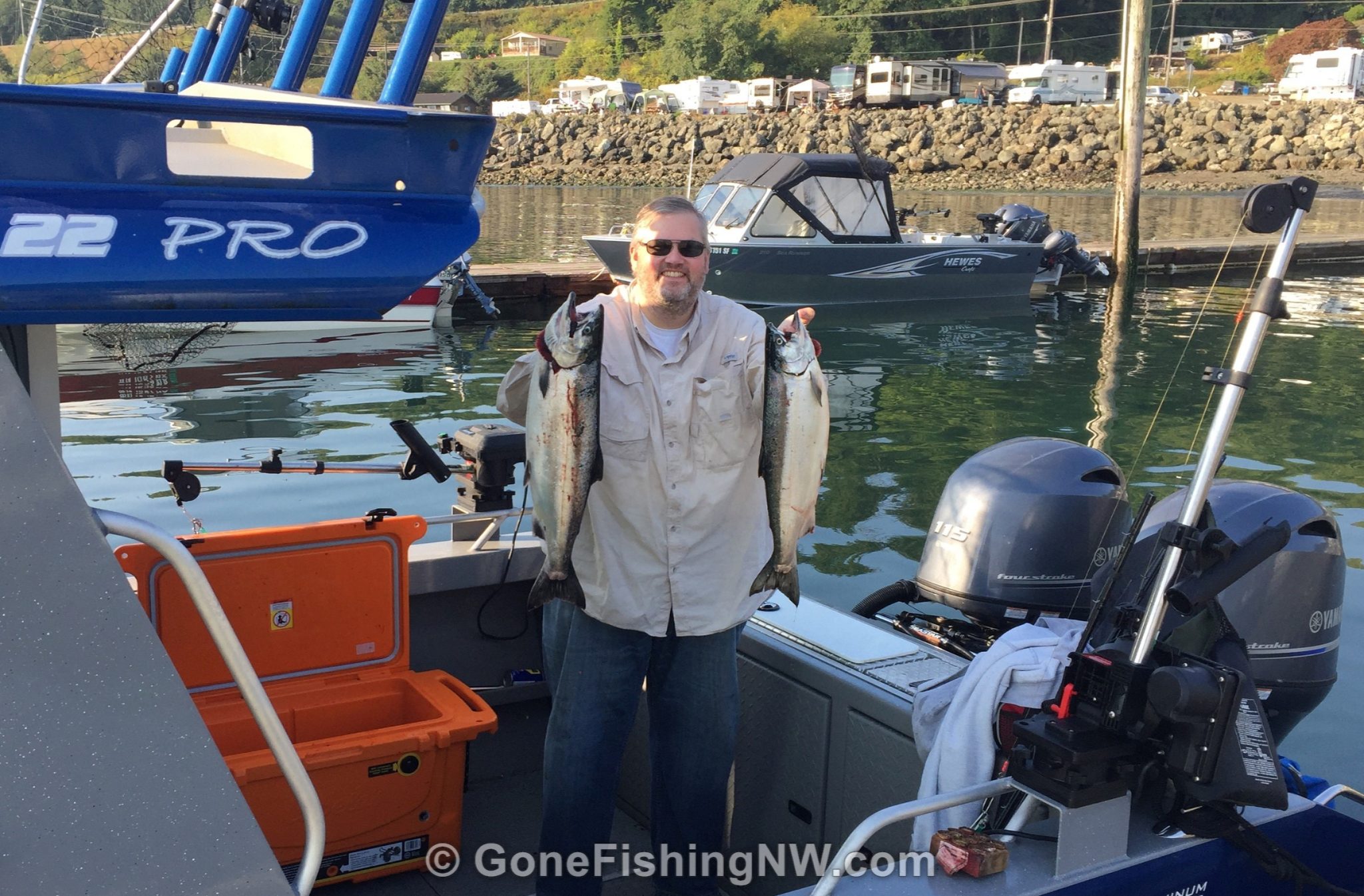 Recently a friend invited me to spend a couple days with him at Sekiu (pronounced as “CQ”).

For those that haven’t heard of Sekiu before, it is a little town (official population 27) located at the northern shore of Washington’s Olympic Pennisula.  It is roughly half way between the city of Port Angeles and Neah Bay.  One look at the waters at Sekiu and you’ll quickly release why it means “calm waters”. 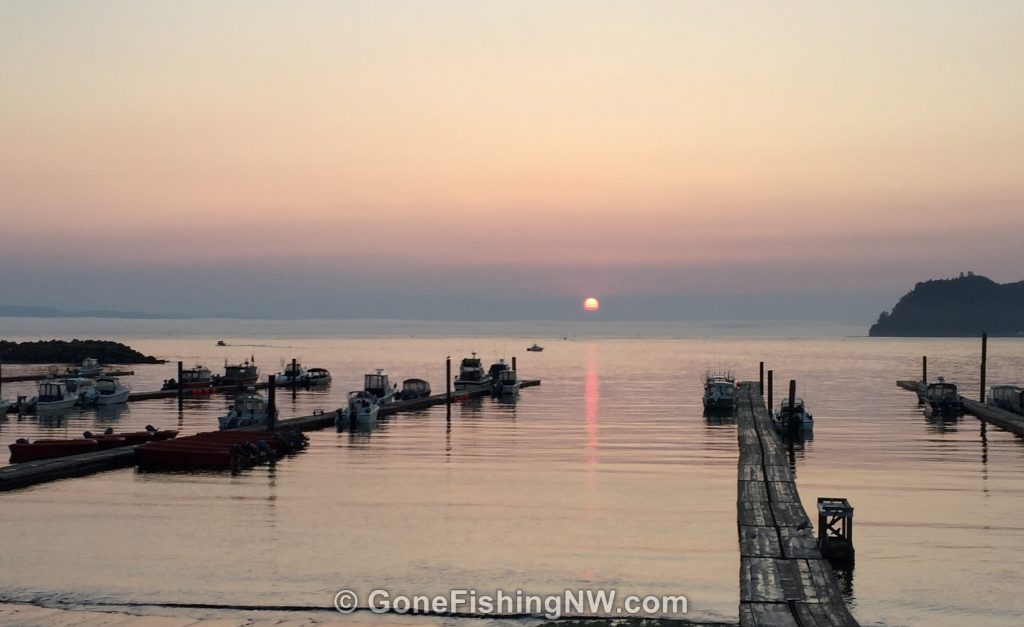 We left our homes and started the long drive to Sekiu.  Once there we got the boat all rigged up and in the water.  Sekiu has several resorts, such as Mason’s Olson Resort and Van Riper’s Resort which provide mooring for guests, as well as lodging and camping.  Van Riper’s also rents some open 16 foot boats with 15 HP motors on them.

The next morning we woke up early, bought some herring for bait and hopped in the boat.  That first morning there was a thick fog, so we have to navigate by compass and GPS – while keeping a sharp eye out for other boats and debris.  Once out of the bay the water was no longer calm, as we experienced waves and occasional rollers.  By the way – if you don’t have a compass in your boat I highly suggest one such as this one – it responds a lot quicker to changes in heading than the GPS does, especially when moving at slow speeds.

We headed north west from Sekiu, until we were about half way to the border with Canada and in water 600 feet deep.  We deployed our gear on the downriggers – one set 25 feet down and the other 45 feet down. 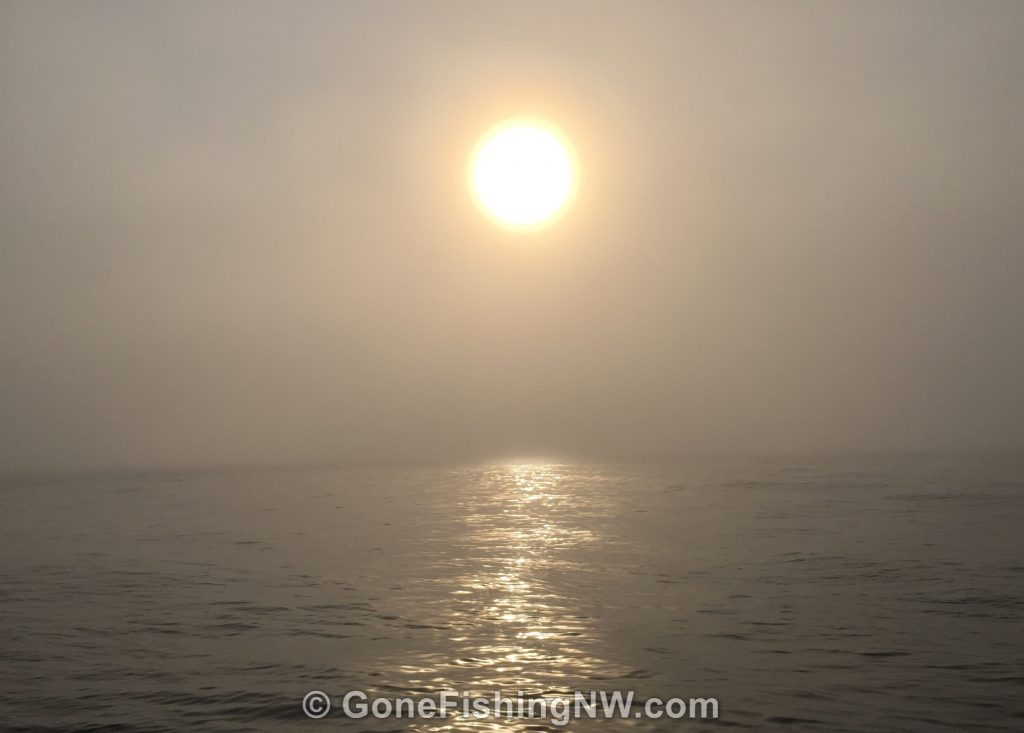 The lures we used were tried and true setup of “high percentage” gear.  It consists of a Red Racer flasher, with a dual hook rig (I like Gamakatsu Big River hooks) tied on 40 pound Maxima Ultragreen.  Between the hooks I like putting a few glow in the dark beads.  Then we take a glow green Ace High Fly and insert it into a purple haze hoochie, and slide the assembly down the line onto the hooks.  Measure the leader to 27 inches, starting at the top of the hoochie. 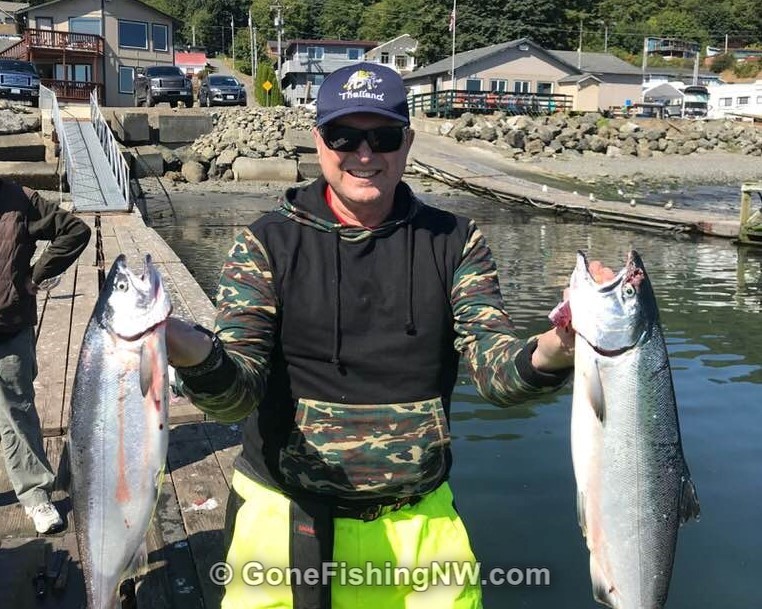 We then kept the boat moving forward at roughly 3 MPH through the water.  We had a pretty steady bite, but many of the fish – and of course the largest – were wild unclipped fish, so we released them.  By 8:30am we had 2 keepers in the cooler, and were working on the remaining 2.  During that time our trolling had taken us north, almost to the border with Canada, so we changed course and started headed back south.

Along the way we had occasional bites.  Most of those fish were lost, and the ones we landed were wild unclipped fish, and so had to be released.  Eventually we landed two more keepers – calling it a day around 10:30am. 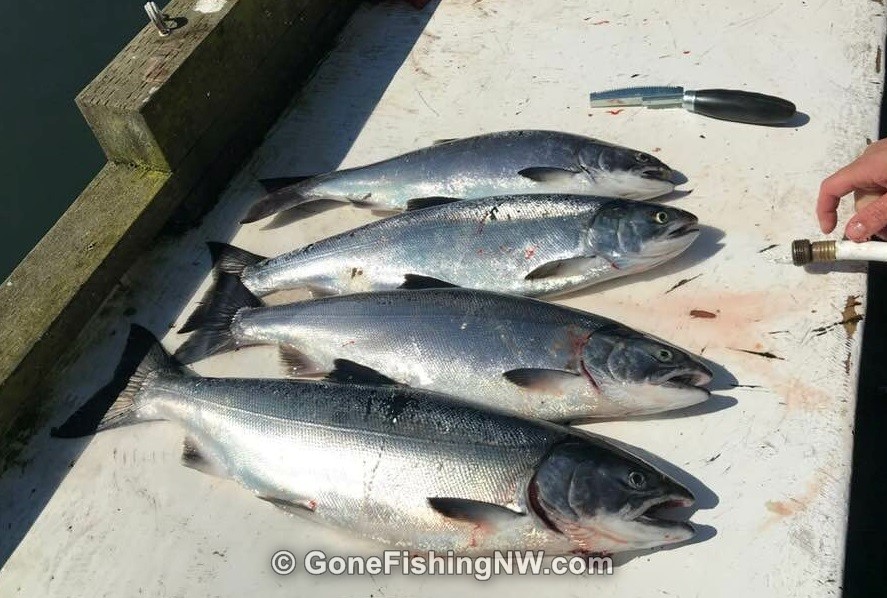 The marina at Sekiu has several fish cleaning stations scatted around.  We used the one on the dock we tied the boat up to.  Several other boats came back to the dock while we were cleaning the fish, and washing up the boat.  It seemed like those boats also limited out.

The next day we started close to 7:00am.  Based on our experience the other day we headed east, instead of west, so the current would take us back towards Sekiu rather than away. 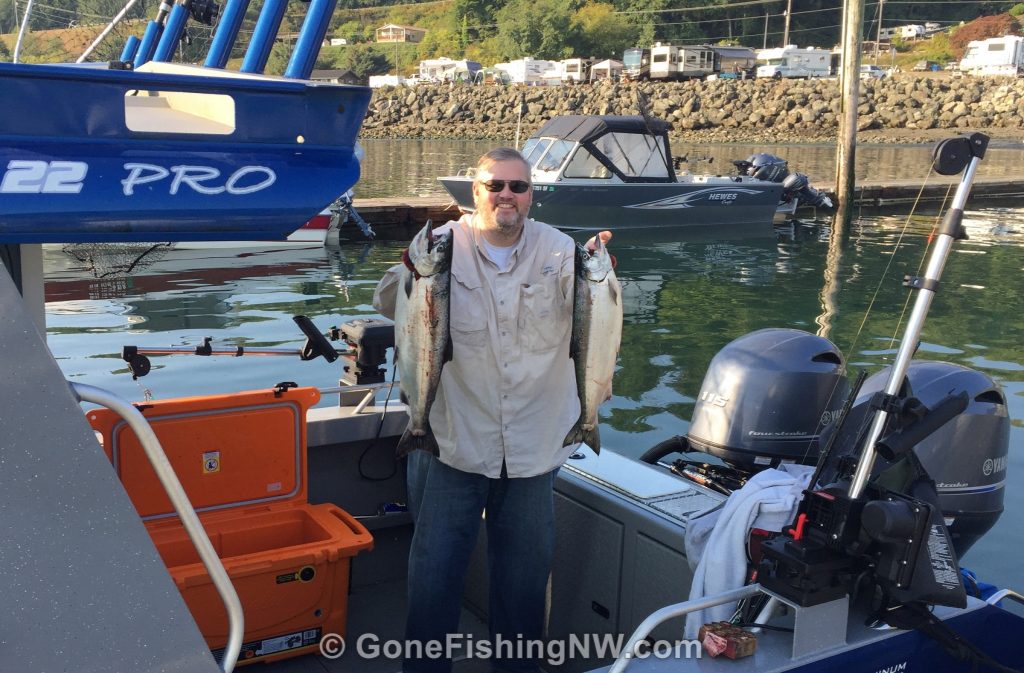 We used the same gear as before, except I put on a Glow Geen Lighted flasher, which I had modified with a stripe of red tape so it was similar to a Red Racer flasher.  If you haven’t seen one, the new lighted flashers have a little LED light in it which flashes red, green and white.  I had to try it and see if it made much of a difference.

We also baited the hooks with a strip of green label herring, which we also did the day before.

This time we had really quick action, and very few wild fish.  We landed our limit of hatchery fish by 8:15am, and headed back to the marina to clean them and put the boat in order. 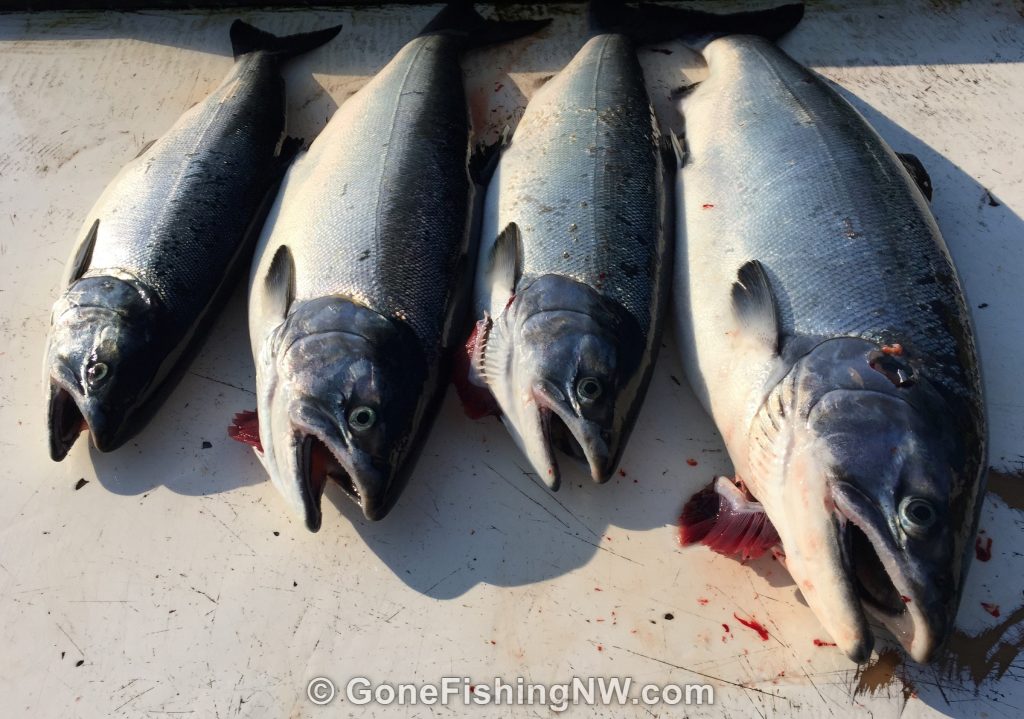 During this trip I brought my mooching setup.  It is a 10’ 6” mooching rod, paired with a mooching reel.  The long and limber rod, combined with the direct drive reel make for a really fun fight.  My friend liked it so much he is going to get his own mooching setup. 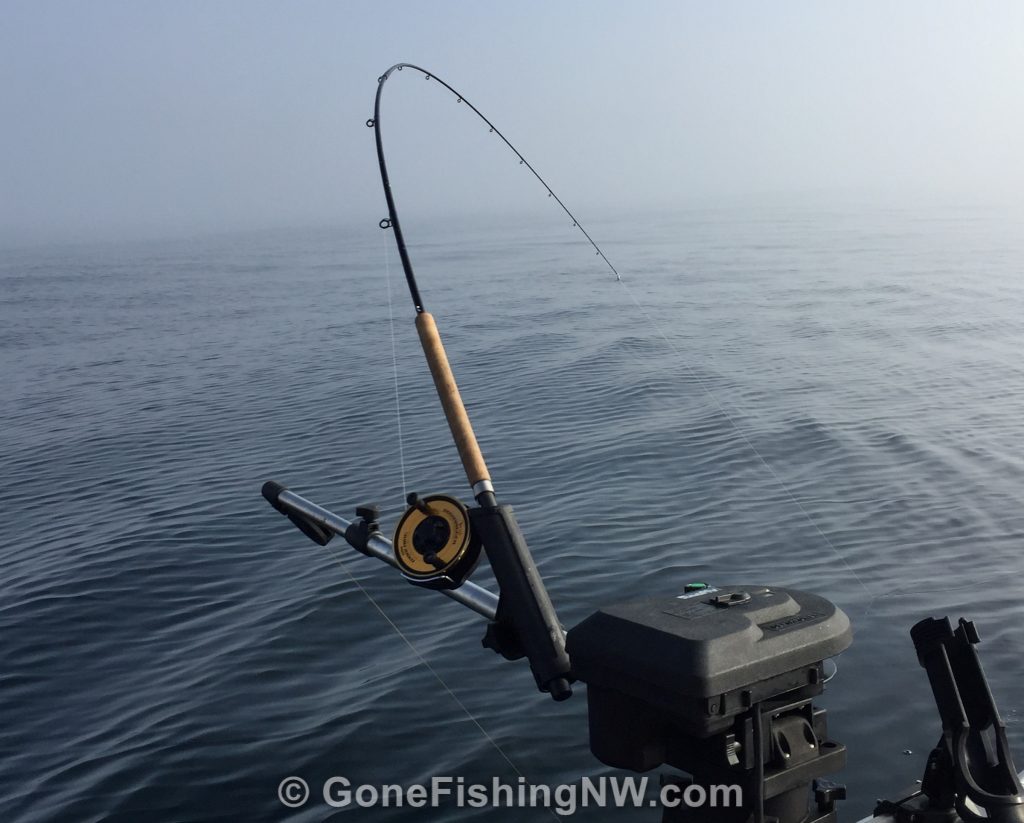 The experiment with the lighted flasher worked out well.  Both rigs caught fish, however the lighted flasher got 50% more bites than the traditional unlighted flasher.  Part of the reason is likely because it was not quite fully light, being first thing in the morning, and a heavy fog.  On a sunny day it might not make as much of a difference.

Another year and another great time out at Sekiu.  If you get the chance to get out there for some fishing, I highly suggest it.