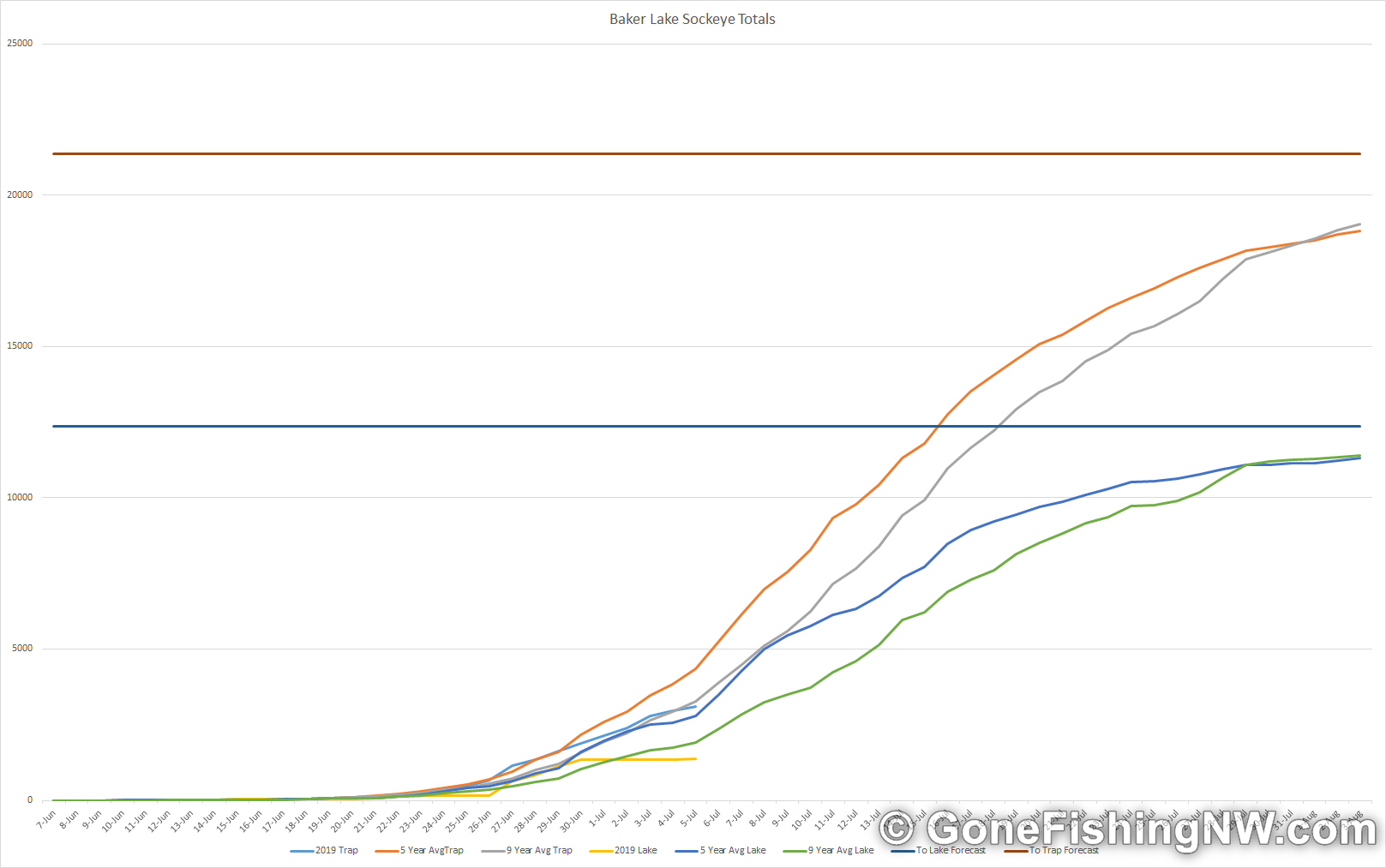 There are 3 main sockeye runs in Washington State currently – Columbia River, Lake Washington and Baker Lake.  Each has a location the fish must pass, like a fish ladder, which enables a count to be performed.  This gives us a unique view to see how the run in shaping up, without relying on anecdotal evidence like fishing reports.

This article summarizes the data we currently have available on July 7th, 2019.  Based on how the data is collected and shared, the data is a few days behind.

Currently there are roughly 55k sockeye that have gone over Bonneville Dam in the lower Columbia.  This makes the Columbia run currently larger than the other two runs combined.

While that sounds like a lot, this is significantly behind the 5 year average of 296k and 10 year average of 276k fish.  Around this time typically about 85% of the fish have reached Bonneville Dam, which means the run looks like it will come in under forecast at around 65k fish.  Hopefully we’ll see a strong push of Lake Wenatchee fish in the next couple weeks and turn that around.

The Lake Washington fish are primarily headed for the hatchery on the Cedar River, but there is a small amount that naturally spawns in both Lake Washington and Lake Sammamish and their associated tributaries.  The forecast this year is a dismal 15k, which is about 20 times smaller than needed to meet the escapement goal for a fishery.

Currently almost 8k fish have shown up.  Historically by this date about half the fish have arrived, which means this run may come in really close to pre-season estimates.

Baker Lake is a very popular fishery, and is often referred to as “Boat Combat Fishing at its Finest.”  It is unique compared to the other runs in that tribal netting largely happens first, then the remaining fish reach a trap and then trucked into the lake for the majority of recreational fishing.

How this works is that the pre-season estimate of about 33k is divided into 3 sets.  The first set is the hatchery goal, which is 9k.  That leaves roughly 24k, which get split 50/50 between the tribal netting and recreational fishing – for about 12k each.

The tribal netting occurs a little bit in salt water near the mouth of the Skagit River, and the majority in the Skagit and Baker Rivers.  It mostly happens at the beginning of the run.

The fish that make it past the nets reach the barrier dam, and fish trap.  Once trapped the hatchery gets “first choice” of the fish in the trap, until the weekly hatchery goal is met.   This week (July 8 – July 14) the hatchery goal is 2180 fish, for a running total of 3911.  Any fish left after the hatchery meets its weekly quota are then trucked to the lake.

If you’d like to know more about the process, then check out Baker Lake Sockeye By The Numbers.

Usually at this point roughly 23% of the fish of the total run have made it back.  If we apply that to the current numbers that means only getting about 14k to the trap, for 5k in the lake.

It appears this fishery is off to a bad start.

If you want to improve your sockeye fishing game, then make sure to take some time to read about gear and techniques in this guide about sockeye fishing.

If you want to track the numbers for these different runs yourself, then you can find that information at: