Between Port Angeles and Neah Bay is the tiny town of Sekiu.  This town of 27 has a name which means “Quiet Waters’, but my recent fishing trip there was anything but quiet.

I have a friend who has been fishing the waters of Sekiu each fall for decades, and since I’ve never fished there he invited me to join him for a few days.  He was fishing it for about a week, so he was already there when I arrived late one night after work. 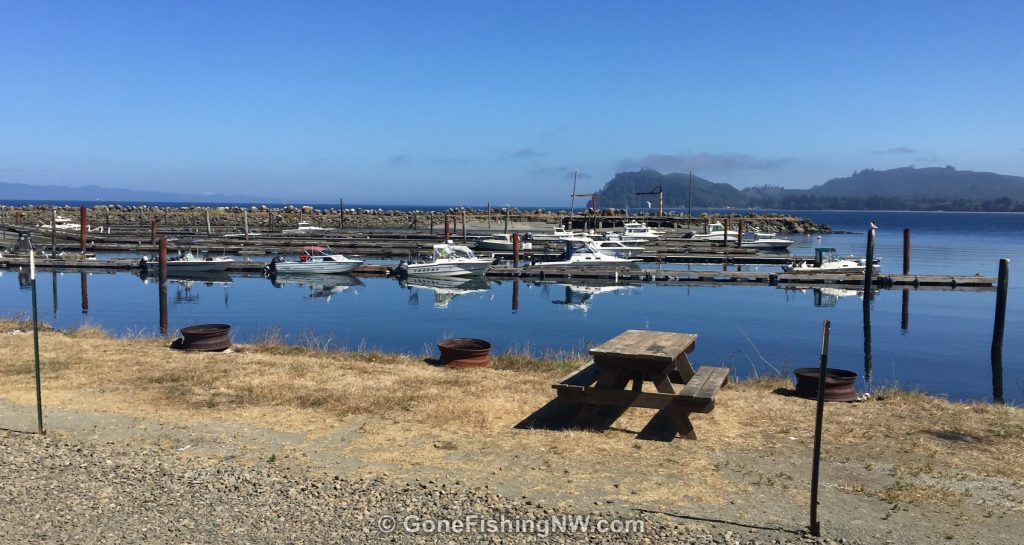 He had arranged for me to stay in one of the rooms rented out there.  Now I’ve stayed in quite a variety of places on my various fishing trips, but this room was unique.  My friend called it a “man cave” and that is a pretty good description.  It consisted of 4 twin beds and a small bathroom.  The bedding was simple and adequate, but I don’t think any of the sheets matched each other.  The mattresses were clean and serviceable, but varying firmness – which had me playing Goldilocks to pick one.  There were no chairs or tables in the room, even though there was space for it.  Fortunately it met the most important qualifications for me – it was clean, cheap and had a functional bathroom.

In the morning we all met at the store for Mason’s Olson Resort.  We loaded up on snacks, ice and bait for the day.   The boat was already in the water and tied up to one of the docks, since they had been fishing already for several days.  We all piled in, and quickly set off.

Sekiu sits in a bay which is well protected from the open waters in the strait, so it was glass smooth as we left.  Conditions out in the strait that morning consisted of some good sized rollers and small waves.  This made for a bumpy ride out to their favorite spot.

Once we reached position we started getting lines in the water.  Two lines were running divers and dodgers and the other two were on downriggers with flashers.

From the beginning we were getting bites.  The first line was in the water just a couple minutes before it had a bite.

We spent the first hour struggling to get all four lines down in the water at the same time, due to all the fish biting. 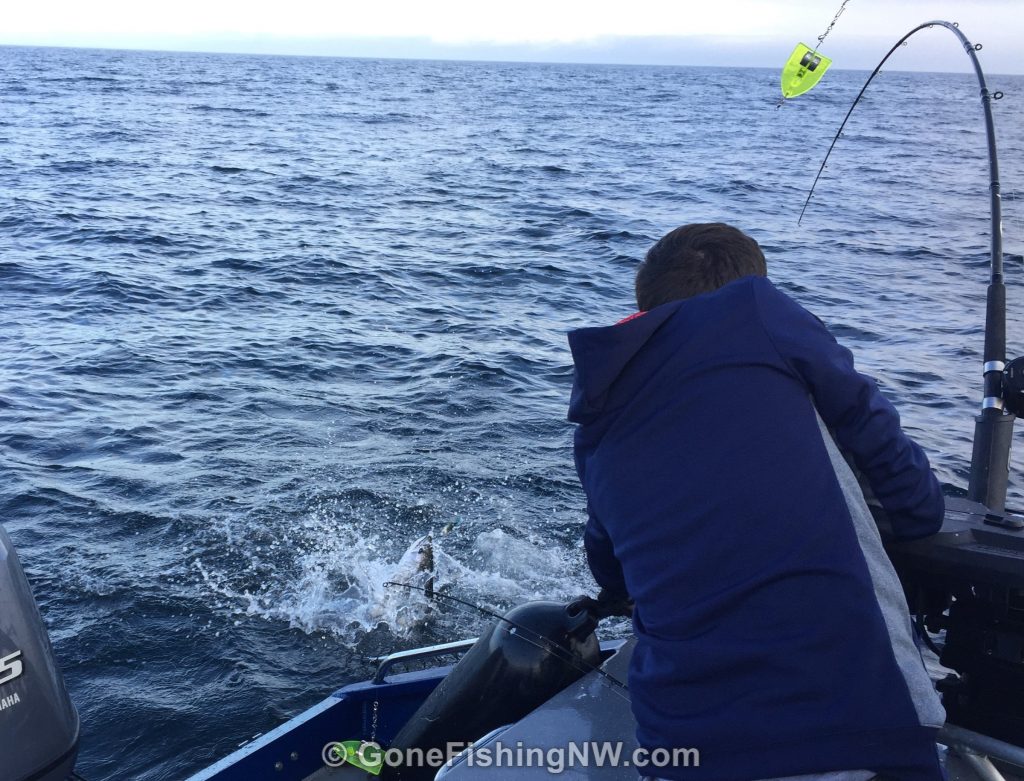 I lost count how many takedowns we had, or how many fish made it to the boat.  We caught a ton of coho, but had to release most of them because they were either wild (unclipped) or undersized.  We had lines wet probably not much more over 2 hours before we reached our limit of 8 hatchery coho.

The diver lines did best at the beginning, but towards the end the downrigger lines were getting the majority of the bites. 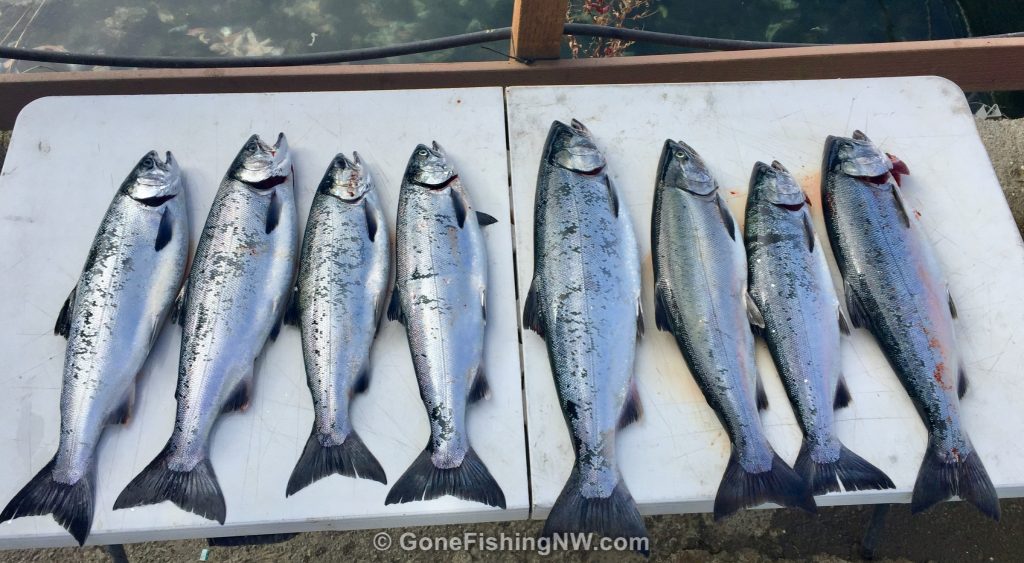 After limiting out and securing the gear we headed back to the marina.  Since we had time we stopped at Mason’s Resort for pictures in front of their sign.

Total time from cast off to tie back up was 3 hours.  The dock had fish cleaning station, which we used to descale, clean and fillet the fish. 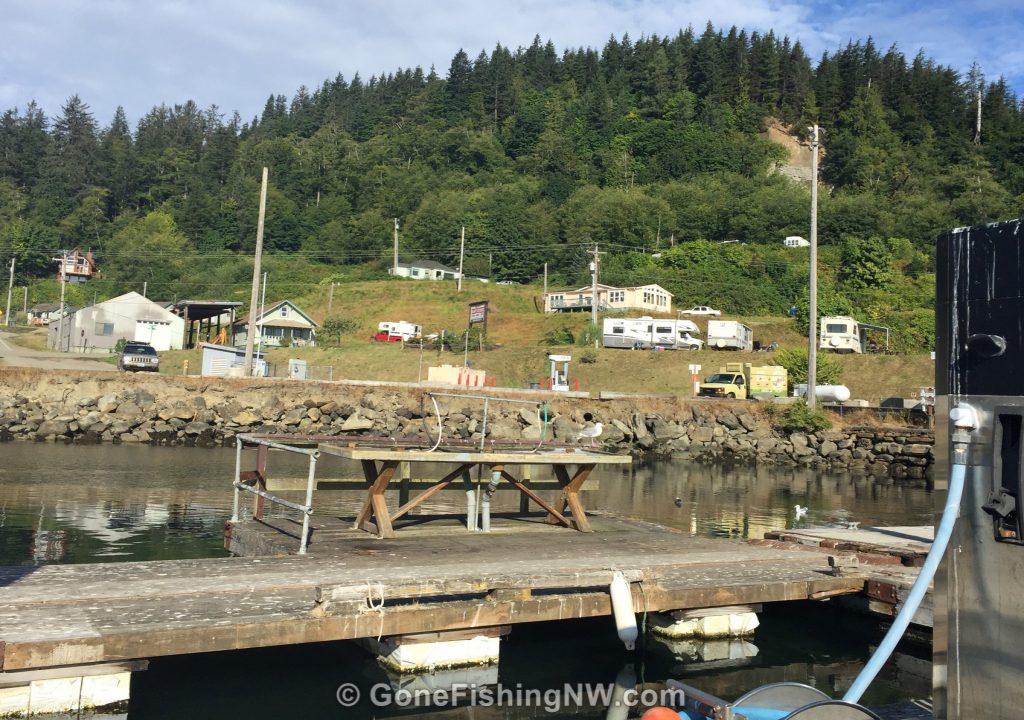 We spent the rest of the day relaxing, taking a nap and having a meal at the local café.

The next day Washington waters were closed, so we bought Canadian licenses and boated farther north.  There was two more guys on board, and combined with fishing less familiar waters we knew that limiting out would be a bit tougher to achieve limits.

We found a spot we figured likely, and was marking fish on the finder.  We quickly got our lines down and started catching fish.

This day the water was smoother, but the fog had moved in.  We were getting bites, but not as much action as the previous day.  I think proportionally we were getting more undersized fish than before, especially on the diver setups. 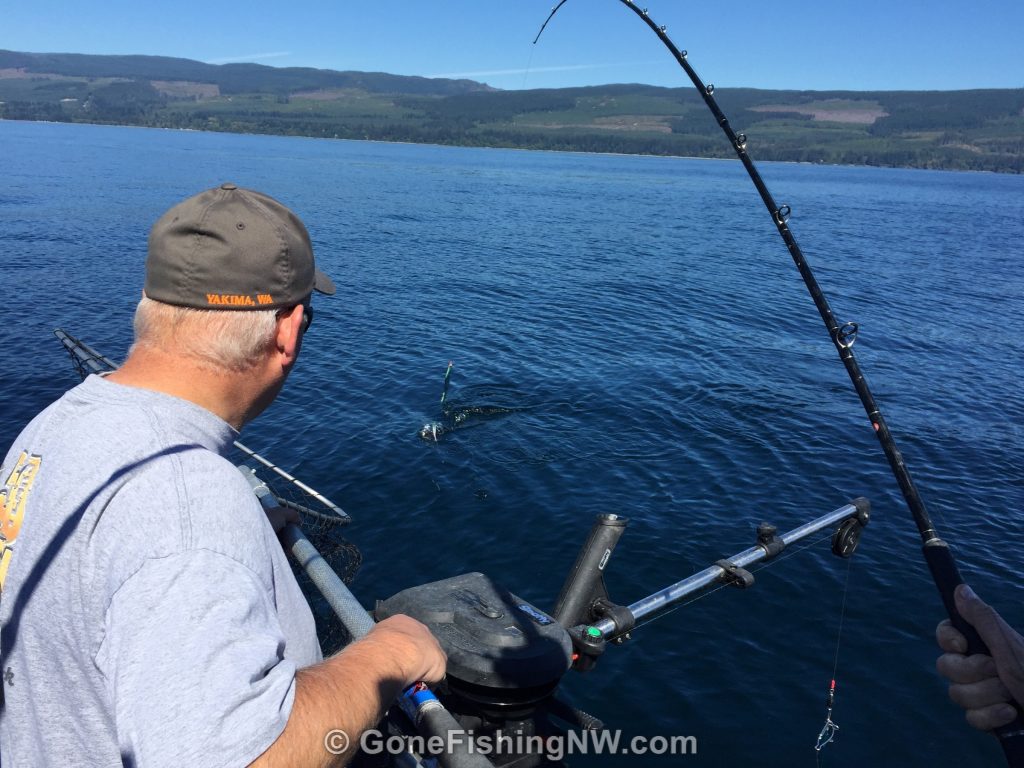 This day I put out some of the gear that I brought along.  It was similar to what my friend normally uses, but slightly different.  This turned out to be a good thing as the fish seemed to be prefer that setup.

During the day we relocated a few times, looking for the hot spot.  All the places we tried we caught fish, but nothing like the day before.

My personal highlight was when I dropped the downrigger my gear was on down deeper to 100 feet.  Later it had a good take down.  I grabbed the rod and instantly I could tell it was something different – the tugs were much stronger and it was slow getting the line in.  It was a really nice king – and since we were in Canadian waters we were allowed to keep it. 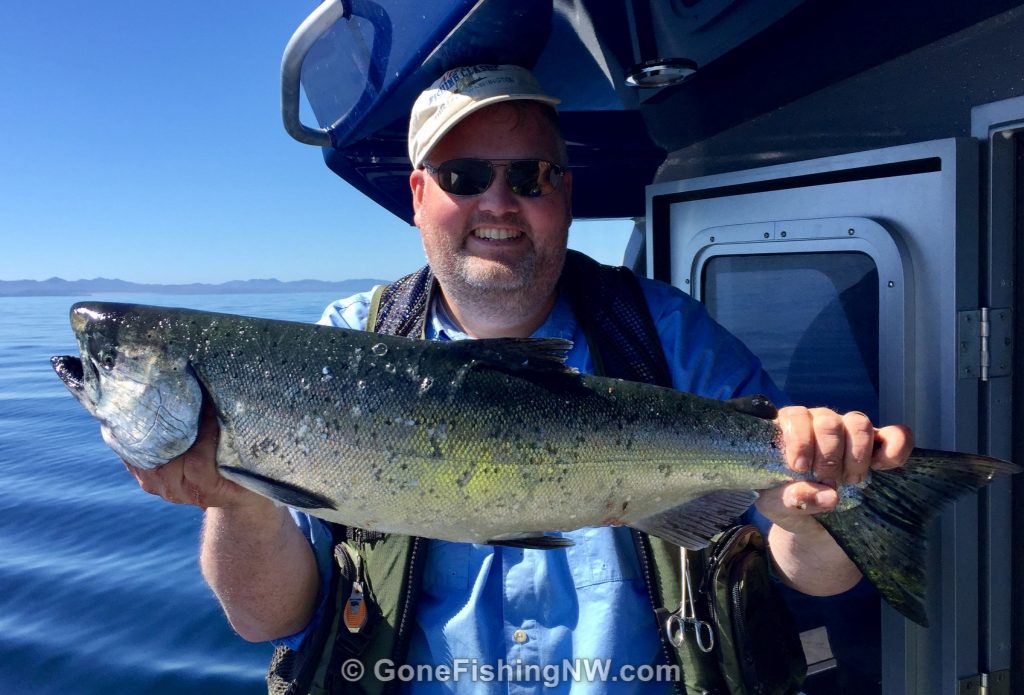 Like the day before we caught many undersize or unclipped fish which were not legal to keep.  It was fun to reel in those fish, even if we couldn’t keep them.

We stopped around 3pm, and went back to clean our catch of 4 coho, 2 pinks and 2 kings. 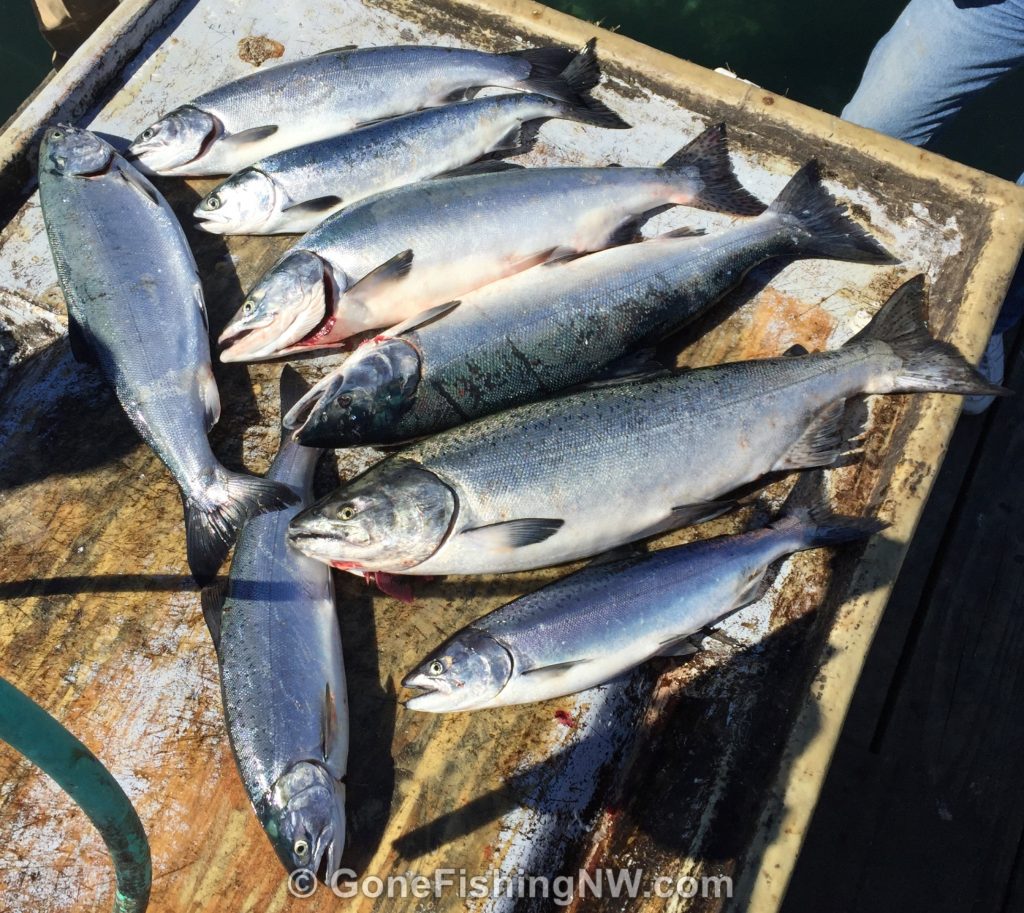 This was my last day, so I put my fillets in the cooler and hit the road for the long drive back home.

It was a very fun trip – not only catching a lot of fish but hanging out with some cool guys.  I learned a few new things about coho fishing, and hope to make it back to Sekiu sometime.

I don’t remember the exact rods and reels we used, but if you need a decent coho downrigger or diver setup these should work great.

On the budget side look at the Shimano Talora downrigger rod.   If you want something high quality check out the G Loomis EX6 E6X 1143-2C SAR GH.

For a reel I recommend an Okuma Level Wind.  If you are looking for a high quality reel that will last your lifetime then it’s hard to beat a Shimano Calcutta.

In any case spool it with 30# Power Pro braid – I like Moss Green.  This will give you plenty of strength, while allowing you to pack lots of line on the reel.  The thinner diameter will also cut through the water better resulting in less downrigger blowback and better diving with the divers.

I tip the braid with about 10 to 15 feet of 20# Maxima Ultragreen.  This gives you thicker line to put in the downrigger clip, as well as not spooking the fish.

The diver setup consisted of a 4” Deep Six diver, then about 3 feet of line, followed by a 2/0 chrome dodger and then the leader and lure.  We used two different lures with the divers – a hoochie or Brad’s Cut Plug.

The favorite color cut plug was the 4” Blue Magic.  It was rigged with two 3/0 Octopus hooks.  The hooks were tied on 30 pound Maxima Ultragreen with a gap of about half an inch between the bottom of the top hook and eye of the second hook.  Threaded above the top hook was 3 beads of alternating colors – two of which were red and the other glow.  The line was then threaded through the holes of the lure.  The leader is then about 3 feet between the lure and dodger.  The inside of the cut plug lure was filled with canned tuna fish.  Remember to use the tuna packed in oil, as it leaves a better scent trail. 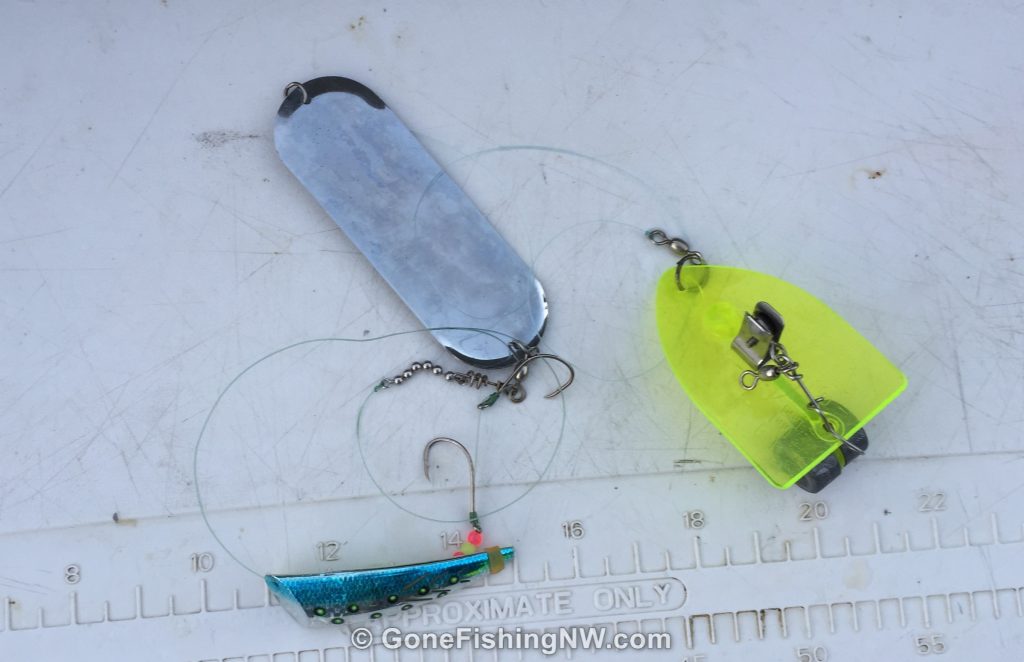 The hoochie was tied up with two 3/0 Octopus hooks.  The hooks were tied on 30 pound Maxima Ultragreen.  I tie the hooks so that the trailing hook hangs out a little bit beyond the end of the hoochie.  Then a twinkle skirt is slid down the line, followed by the hoochie, such as the Double Glow Green (OG142R) color.

You can use 30# Maxima Ultragreen, but if you want to impart a bit more action then consider 40# Seagar Fluorocarbon.   The leader should be about 30 inches long.

The hoochie was baited with a fillet of herring.

The downriggers both used the same setup – which is a very traditional coho rig.  A red racer flasher, followed by a hoochie.  My friend uses the same color hoochies and rigging as on the diver setup.

The setup I used the second day consisted of a similar rigging.  I used 4/0 Big River hooks, which do a great job of holding fish even without barbs.  Instead of the green hoochie and twinkle skirt, I used a Purple UV hoochie (O225R) with a Green Splatter Ace High Fly (ACEHI342) inside.  There is something about that color combination the fish just love. 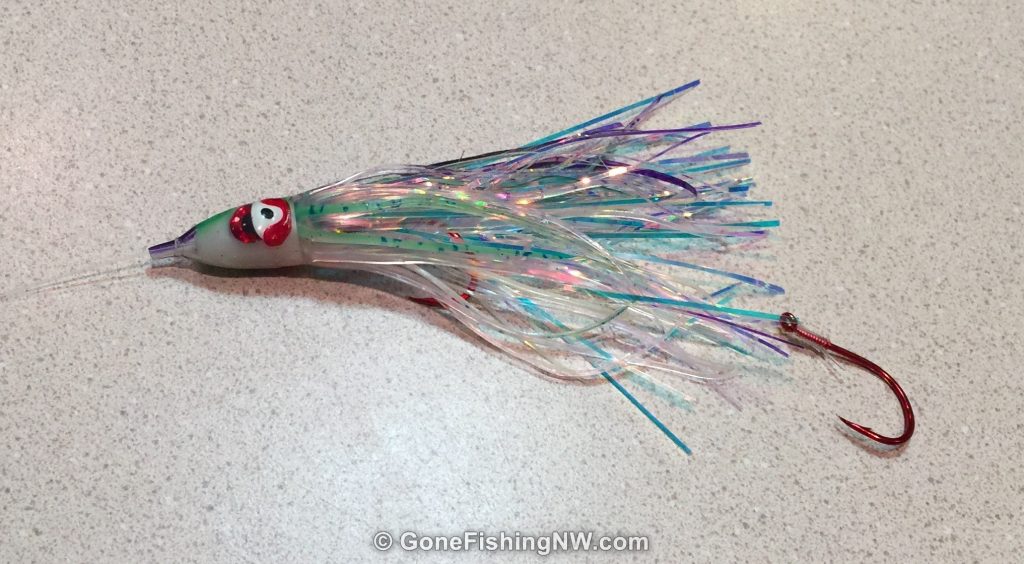 Check out the coho page for more information about how to catch them.