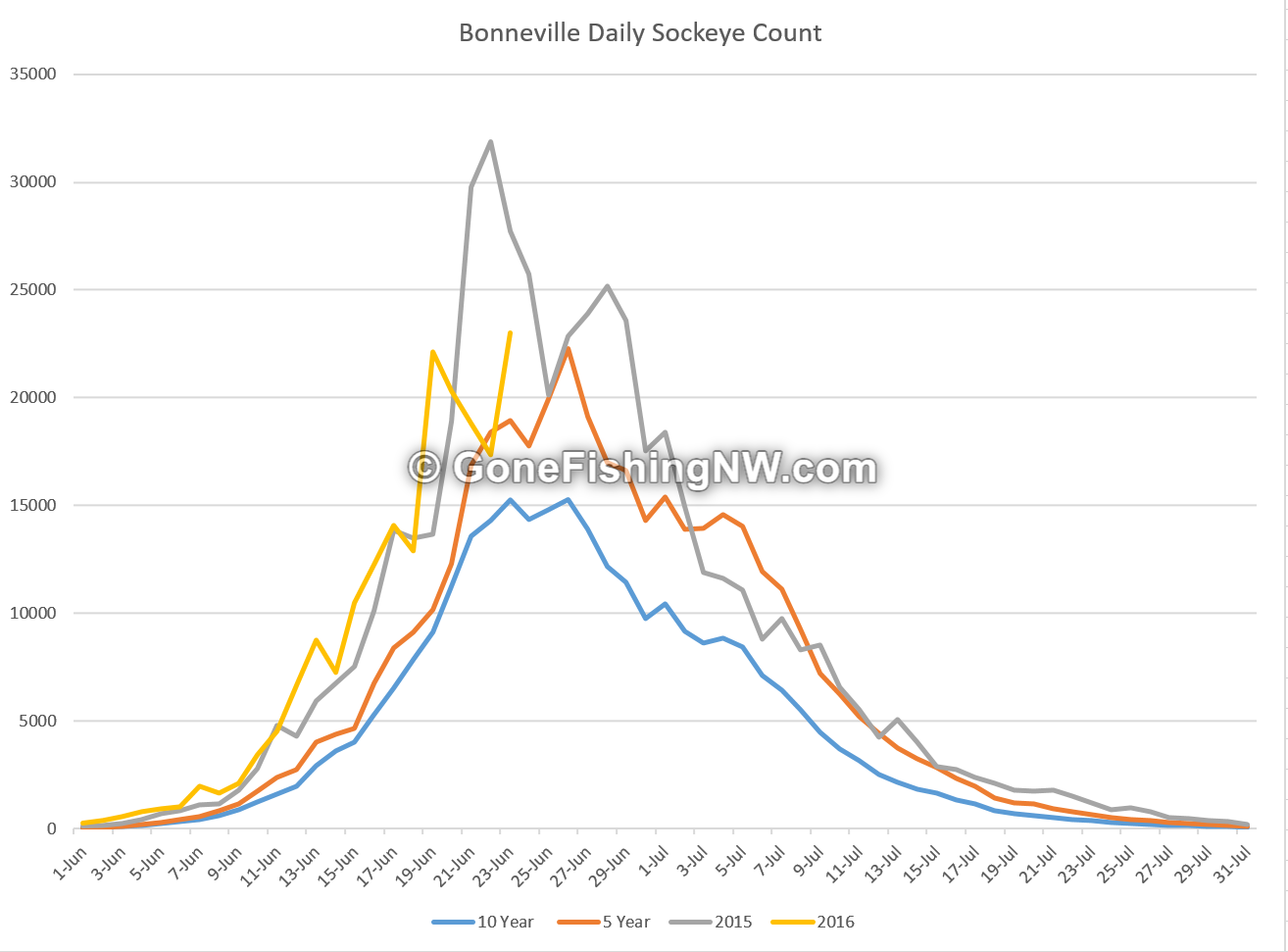 After a disappointing lack of spring Puget Sound salmon fishing, I was looking for some happy news.  So I went and checked on the numbers for the various sockeye runs in the state.  The last few years’ sockeye has been a bright spot for Washington salmon (if we ignore Lake Washington).   Because of the dams and locks along the migration path we actually have hard data for the 3 major sockeye runs in the state – the Columbia river, Lake Washington and Baker Lake.

Let’s get started at how the runs look now, and how it compares with the pre-season forecasts.

The Columbia river return is definitely a happy surprise.  This return is made up of 3 different groups – Wenatchee, Okanogan and Snake river fish.  The preseason estimate was a total of 101,600 fish:

The numbers that have actually cross Bonneville dam, as of June 23rd, is over 192 thousand.  This is awesome news.  Likely in a week we’ll have over double the estimated return.

The nice thing is these should mostly be Okanogan and Snake river fish, as historically the Wenatchee fish hit Bonneville closer to the end of June. 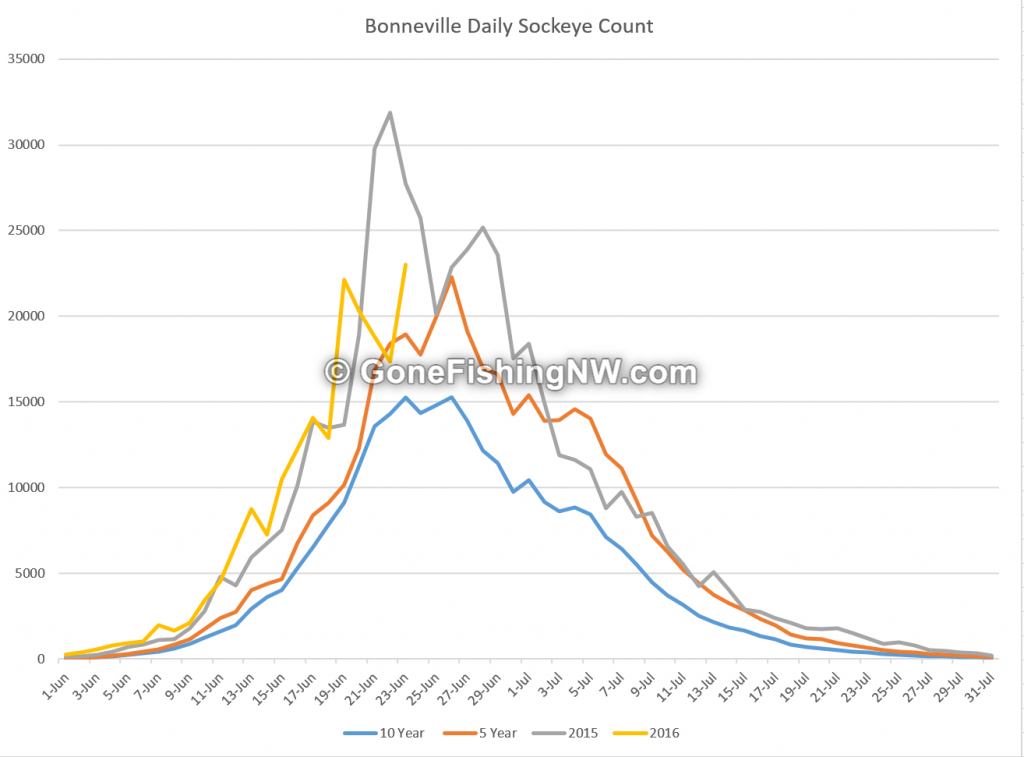 When we look at the trend line for the total number of fish, it is my guess that the final number will be over 400 thousand fish. 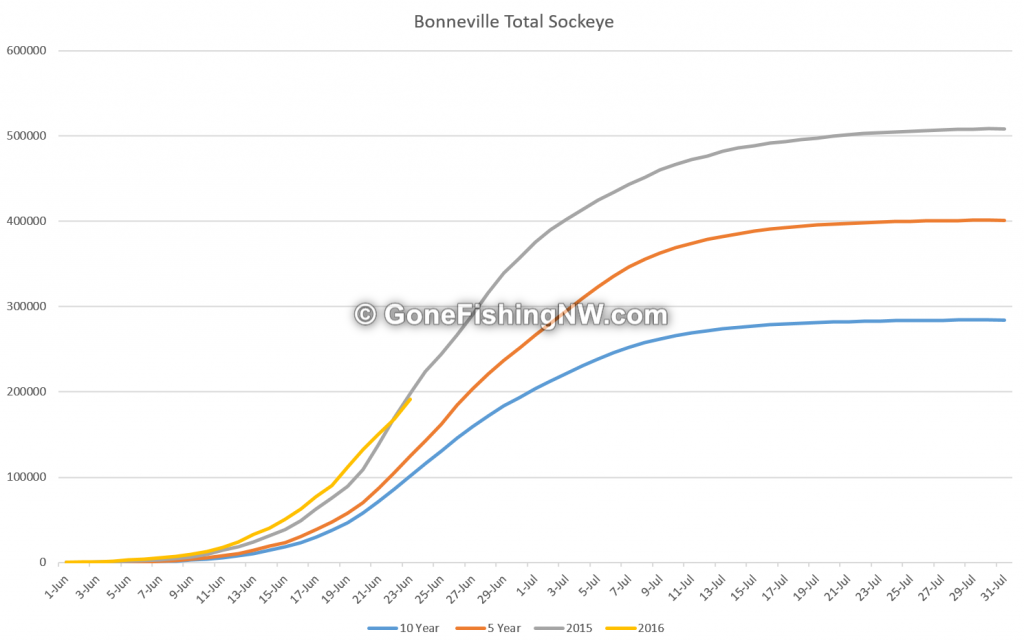 The forecast for Baker River run of sockeye is about 55 thousand fish, which would be a record return.  It is still early days, but we are only up to 317 fish having made it to the fish trap.  By the same date last year almost 600 had made it that far.

It might be too early for predictions but I’m going to make one anyway.  I think this year’s return is going to come in significantly below estimates.  Combined with the tribes taking their half first, my guess is we’ll see 15 thousand to the trap – rather than the 27 to 28 thousand the pre-season estimate would have us hope for.

The sockeye in Lake Washington have been in trouble the last few years with very low returns.  Combined with the high escapement it has been quite a while since there has been a recreational fishery.

This year the numbers are much better than last year, with 10 thousand fish having gone over the locks versus last year’s 3 thousand. 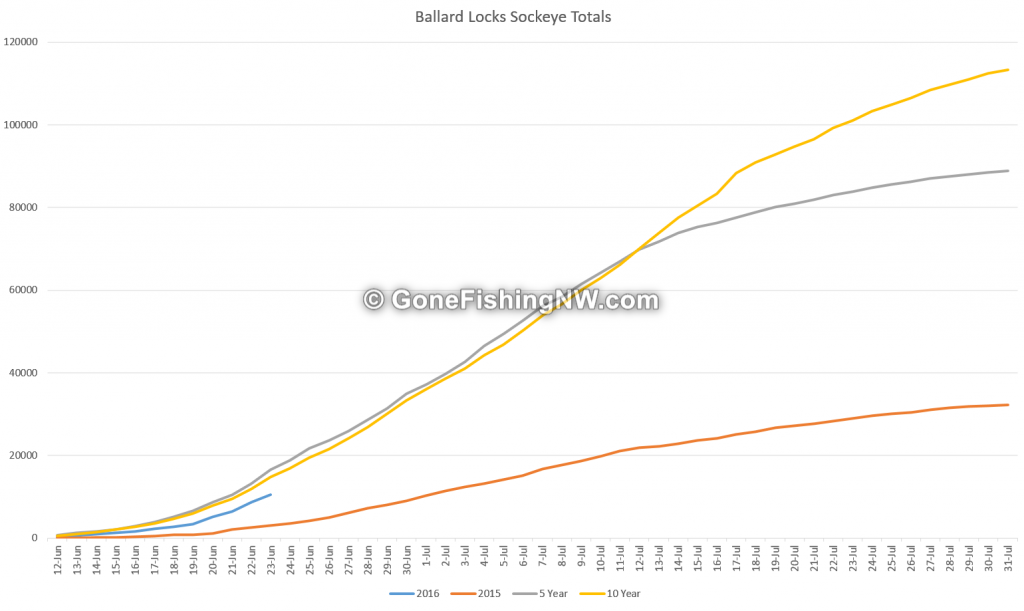 The pre-season estimate is 119 thousand, but looking at the graph I think we are on track for about 70 thousand.  Disappointing, but not a complete disaster like last year.

So even with the decrease in the escapement to 200 thousand, it looks pretty certain that we’ll not have a sockeye fishery in Lake Washington this year.  Again.

Get Ready For Sockeye

Regardless of your favorite sockeye fishery, it is time now to start preparing.  Check out the site for great tips on how to catch sockeye.

What do you think about my predictions?  Is sockeye on your list to fish this year?