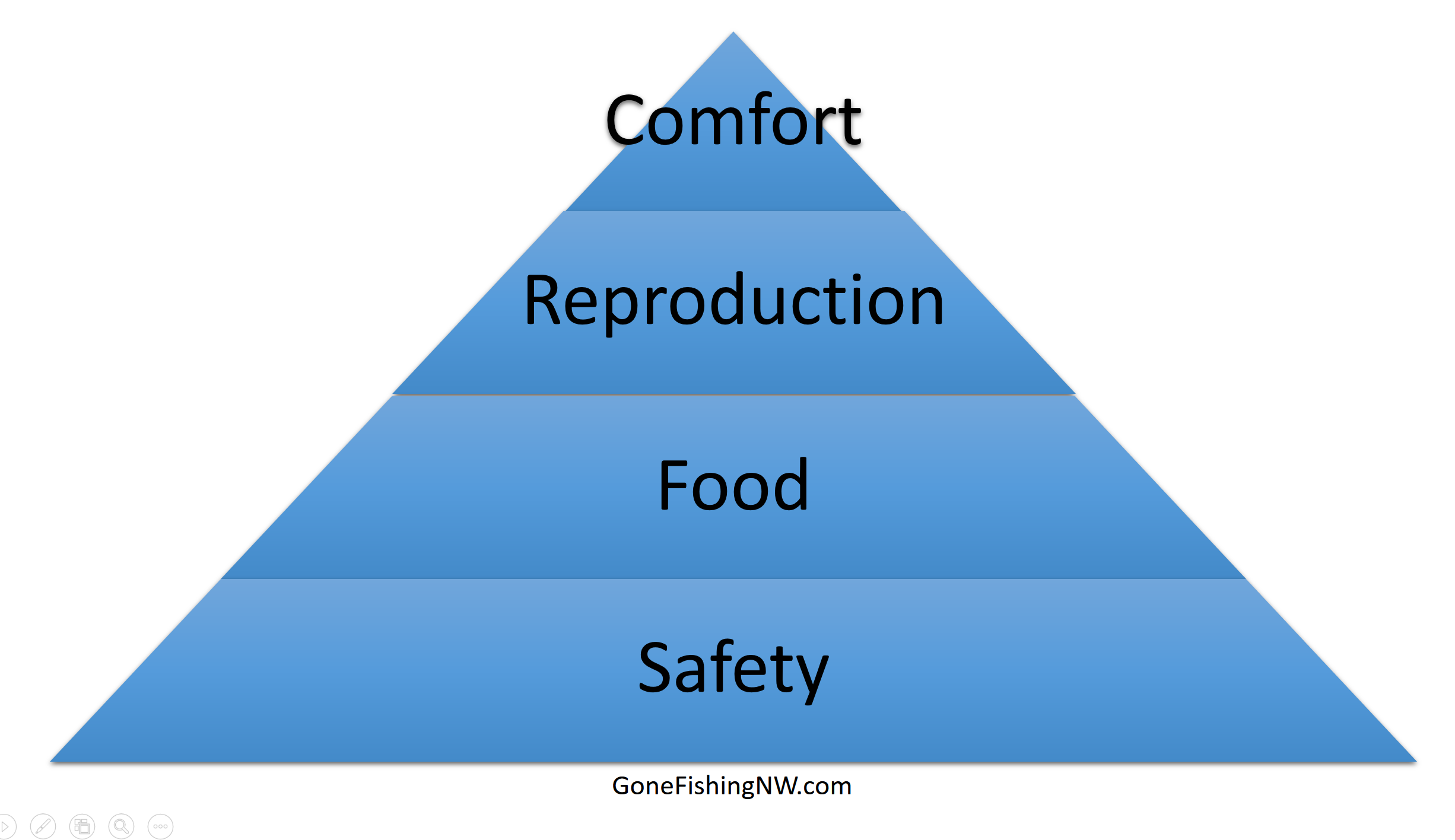 Trout is one of my favorite fish to target.  While the typical trout is not as large as salmon, they usually put up a good fight for their size .  We can also target them with really light gear, so we feel every movement of the fish.

The more we understand about trout, the more successful we will be in catching them.  In part 1 of this series we will cover the needs trout have.

Now the first thing you may be wondering is what is a stillwater trout?  Stillwater is a term I’ve heard mostly used by fly fishermen which basically means things like lakes and ponds where the water doesn’t move.  Saltwater is explicitly excluded.  It doesn’t matter if the body of water is quite large or small, affected by tides, or even has some slight currents in it.  Just so long as it is more like a lake than like a river.

For trout I specific mean the following species:

For the most part the information I’m presenting applies to other trout species and subspecies not mentioned, assuming you can find them in lakes and ponds.

So what I mean when I say stillwater trout is any trout which primarily lives in a freshwater lake, pond, reservoir, or similar.  I like using it because if you say “lake trout”, to some people that means Makinaw specifically.

You may have heard of the theory of the hierarchy of needs.  It makes sense that this concept applies to species of animals, as well as people – but the actual needs are going to be different.

Since trout are relatively simple animals their needs are correspondingly simple.  Their needs, in order of priority are: 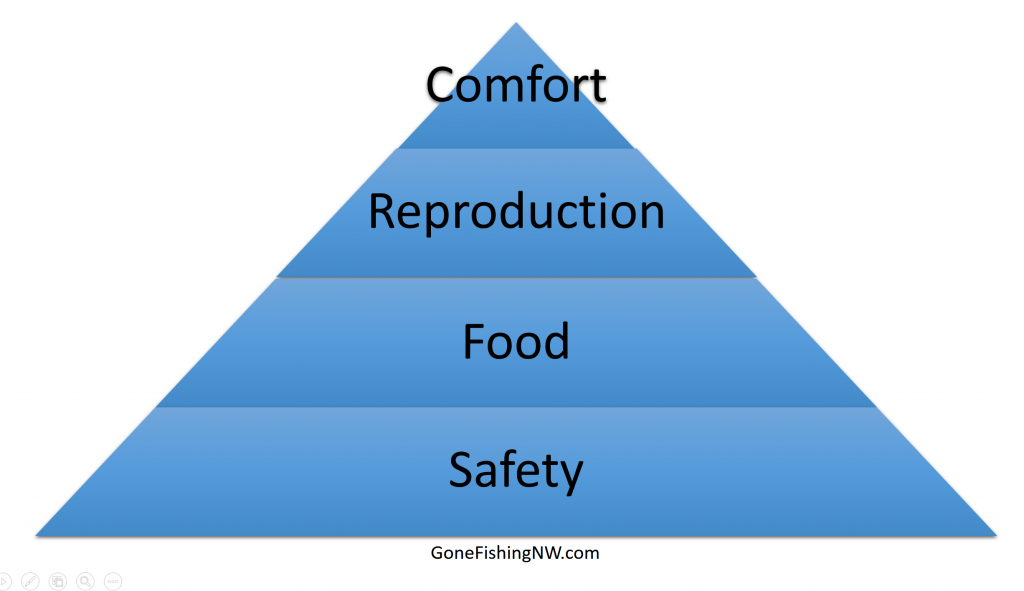 Of primary importance is safety, as it is hard to eat or reproduce if you are dead.   The primary thing that being unsafe means is being exposed to predators.

These predators could be in the water, on land or in the air.  Some examples include:

Most stillwater is pretty safe when it comes to land animals, so mostly we need to be concerned with water predators and birds.

The need to be safe will be the primary driver of the fish’s behavior.  It will affect where they go, when they will eat, etc…

The secondary meaning of safety for a trout is being in water it can survive.  This means the water has to be in acceptable range and hold enough oxygen.

To continue to survive (and later reproduce) trout have to eat.  Trout are carnivores, so they eat other animals.  This can range from small plankton like daphnia, to water insects, to leaches, to larger fish.

If opportunity presents they will eat land (or terrestrial) insects that wind up in water – say if blown into the water by wind.  Larger trout will even eat small animals like mice, if they are in the water.

The trout will actively feed at the times they feel safe.  In general they when they actively feed they will go to the places where food is likely to be found, and actively hunt for it.

Trout reproduce once a year.  This time is different per species, and will vary a little based on geographical location.  Species like rainbow trout and cutthroat trout spawn in the spring (Feb-May).  Brown trout, on the other hand, spawn in the fall (Oct-Jan).

Trout require running water to flow over the eggs to keep them oxygenated.  So stillwaters without a connection to a suitable creek, stream of river, will not have a population of spawning trout.  In those places you know the trout have been artificially planted.

Leading up to spawning the fish will usually feed heavily, but when they strongly feel the need to spawn they are generally uninterested in food.
As spawning only happens once a year, we can largely ignore this need.  However at the height of spawning season fishing can be difficult, and it is probably best to leave the fish alone to ensure future generations.

Lastly in the needs hierarchy is comfort.  Like the rest of us, there are conditions which are survivable, but not comfortable.

Exceptions to the Hierarchy

Like with anything there are exceptions to the hierarchy of needs.  For example at times the drive to spawn will lead fish to be uninterested in food – or even their safety.  Another is if a fish is hungry enough it will actively feed even if it feels unsafe.

While it is good to know these exceptions exist, for the most part we ignore them because we want to base our fishing on what fish typically do, not what they rarely do.

We now know the needs of stillwater trout.  Next we cover the trout’s traits will determine how the trout behave – which forms the basis for where we can find fish, when it is ideal to fish for them, and what we should use to target them.

For more information about trout and fishing for them, please check out the trout page.