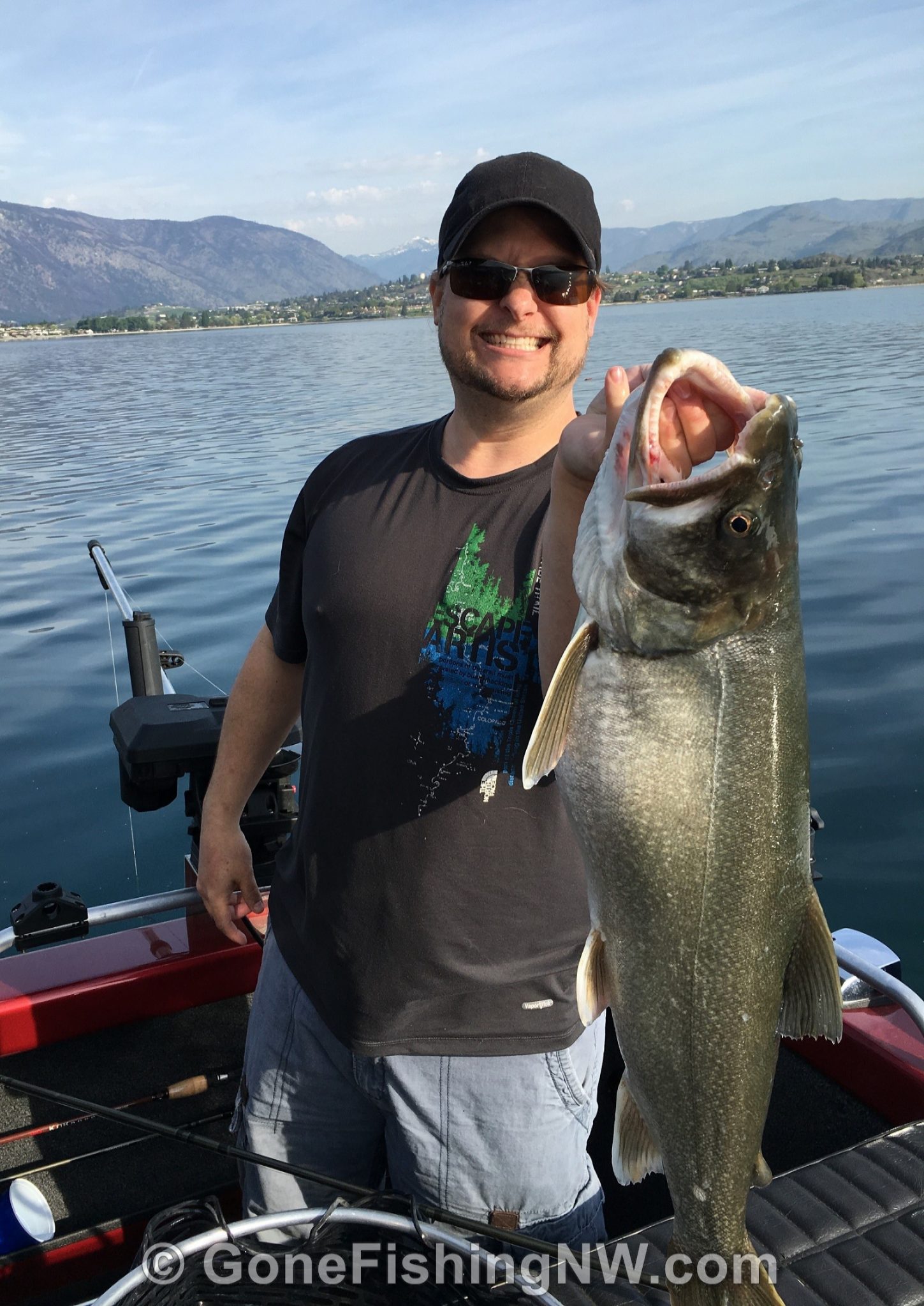 I’ve always heard great stories about fishing Lake Chelan, but had never fished it.  This year I decided it was time to make it happen.  So I talked to some of my friends – we picked a day and made a plan.

Beyond just having fun out fishing, I had two goals I wanted to accomplish during the trip – catch a mackinaw (or lake trout) and catch some of those large kokanee the lake is known for.

Through a friend we arranged a condo to stay in for cheap, and selected whose boats to bring.  I brought my boat, and my friend Scott brought his.  We had a total of 5 guys, although one of them joined us only for the last day.

The condo was awesome with plenty of room for everyone, and parking for the boats.  It also was just about 1 mile away from the Old Mill boat launch.

Preparation is the Key to Success

In many things, fishing included, proper preparation is needed to maximize success.  This includes researching locations and techniques, having boat and fishing gear ready, and generally being ready to fish when the time comes.

Fishing a new lake blindly, especially such a large lake, is a recipe for getting skunked.  So I started by researching online about fishing the lake for kokanee.

The comments from the Facebook group Northwest Kokanee Addicts were especially helpful, along with various articles and past fishing reports.  Combined with some advice from a friend who had fished it before I was able to build a map of popular spots, and had a good idea of lures, speeds and depths which were currently producing fish.

The biggest change from what I normally do was the depth.  The clear water and bright sun push the fish deeper than one would expect based on water temperature.  Current reports ranged from 60 feet deep in the morning, to 130+ feet later in the day.  The clear water meant that longer setbacks were also in order.

When preparing for mackinaw fishing I found several videos on YouTube which were helpful, especially the one featuring Anton Jones, a local fishing guide.

Much of it boiled down to fishing really close to bottom in deep water, and using flatfish and similar plugs.  The mackinaw don’t seem to be that selective, and it is mostly a matter of getting something they will notice in front of their face.

In addition to researching I also got my boat and gear prepared.

I prepared my tackle by giving much of it a wash in warm water and lemon joy.  Then I packed up what I was talking in my tackle bag.  Fishing rods got a new “shock leader” tied on – this is the length of fluorocarbon line I put between the braid mainline and the swivel.

I prepared the boat and trailer by performing regular maintenance tasks, and taking everything out of the boat I didn’t need for the trip.  I double checked the boat storage contained life vests, tools, downrigger first aid kit, sunscreen, garbage bags and all those other various little things which are useful when fishing.

Bait for kokanee was prepared by opening a can of shoepeg corn, and making up several bags for it to marinate in different scents.

Lastly I went to the store and bought all the various food and drink needed.

Then I loaded the boat with the rods, tackle bag, cooler, grill and everything else.

Having all this prepared meant that I could get out on the water and fish instead of having to run to the store at the last minute for some odd or end.

The first day both boats decided to focus on catching mackinaw.  We launched around 7am.

We started by going to “Mack Bar”.  Since my downriggers only have 200 feet of cable, we stayed in the shallower water – fishing between 160-180 feet down.

I used my coho plugs, and selected a MagLip plug that looked good.  It had that fluorescent red and chartreuse that has good visibility down deep.  A quick squirt of some herring scent and down it went.

My friend with me in the boat stared off with a glow hoochie behind a dodger.

Then we started trolling down the lake, trying to follow the contour lines to keep our gear within 5 feet of bottom.  This was hard since we didn’t have good contour map data to leverage.  Instead we followed the simple formula of following the shoreline.  If the water started getting shallower then we’d turn away from shore.  If it got too deep then we’d angle back towards shore.

Eventually the rod started shaking, like the downrigger ball was bouncing on bottom.  A quick look at the finder told us that we were about 10 feet from bottom.  I quickly grabbed the rod and started reeling.  I was rewarded by some tugs back.

After reeling for just about forever I was rewarded with my first mackinaw.  We didn’t put it on the scale, but I’d estimate it around 5 pounds.

We continued this approach for a few more hours and picked up a few more fish.  The other boat worked that same area and had similar results.  So we decided to change spots and cruised up to the Yacht Club.  In that location we marked several more fish on the finder, and got some to bite.

While in that area we fired up the grill for some bratwursts on the boat.  This lead to some excitement as we hooked a fish while they were cooking and I had to deal with the smoke coming from the grill right when the fish was ready to net.

Around 1pm we felt done with mackinaw with everyone landing at least one fish.  My boat landed five and Scott’s six.  All the fish were caught on plugs.  One from the other boat was 10 pounds on the scale.

We then decided to finish up the day by cruising down to the Blue Roof Condos and fish for kokanee.  We didn’t get a single bite, or see any on the fish finder.

We stopped about 3pm, and began the process of getting back to the condo.  Everyone felt refreshed after some showers and we went into the town of Chelan for some dinner.

The next day Scott decided to take his boat to Omak Lake to target cutthroat, while I stayed at Lake Chelan.  This day we were focused on solving catching kokanee.

We started earlier, getting on the water about 6:30am.  Some late night research indicated that the area near the state park was producing fish recently, so we went there first.

This day started overcast, which I hoped would help the bite last longer.  We deployed our array of various kokanee tackle and trolled around waiting for a bite.  As time went on we started switching up lures and dodgers trying to find a winning combination.  We knew fish were there because we could see small schools occasionally on the finder.

Eventually we hit on a winning combination – pink and glow beads paired with a small gold spinner blade, 6 inches behind a pink splatter dodger.  Because of the overcast conditions we made sure to charge up the glow beads in my charge box before sending them down.

We worked that area, using the GPS to mark where we hooked fish to hit those areas again.

Like the day before our bratwurst lunch seemed to trigger a bite, having us set our food down while reeling in and netting a couple fish.

Around noon that day the fish seemed to disappear.  They stopped biting and we stopped seeing them on the finder.  We hunted around a bit but were unable to find them.

We stopped fishing around 1:30pm, with 9 in the cooler and several which came unbuttoned.

That night after the other guys came back we had dinner at a nice Mexican place while swapping stories of our day.  They reported catching and releasing a couple dozen cutthroat at Omak.  The 5th member of our crew also arrived that evening for the fishing the next day.

The last day the plan for my boat was to focus on kokanee in the morning, and then go for macks in the afternoon so the “new guy” could get his first mack.  The other boat did some kokanee fishing, but mostly focused on macks.

After launching around 6:00am we went right to where we had success the day before and started with the winning rigs.  Charge the glow, bait with garlic corn and send them down.

That morning we had fairly decent action, including a few doubles.  The hookup to land ratio was decent, but not great.  To help address that we started only baiting the top hook – this seemed to help and our landing ratio went up.

My boat is setup with two downriggers halfway up the boat, and then two at the back.  We run the front two deeper than the back ones.  We try to stagger the depths to both to cover more water and to avoid tangles.

First thing we were catching fish from 60-80 feet deep.   As time went on the front (and deeper) rods would catch more fish – when that happened we would lower the depth on all the downriggers to follow the fish deeper.

Like the day before around 11:30am the fish seemed to disappear and the action dropped off significantly.  We decided to grill up our hot dog lunch and then move on to macks.

We went back to the Yacht Club and worked that same area for macks.  We landed one before it was time to wrap up for the journey home.

Back at the launch we cleaned our 21 kokanee and 1 mackinaw.  There we met Sam Baird at the fish cleaning station and picked up a few tips.

It was a very fun trip, and one I’d like to do again sometime.  It was great to get my first mackinaw, even though I’m not in a hurry to target them again (just not as much my thing as kokanee).  I felt like I learned something about how to target the kokanee at Lake Chelan, and expect to do better on my next trip.

Thanks and Tight Lines!