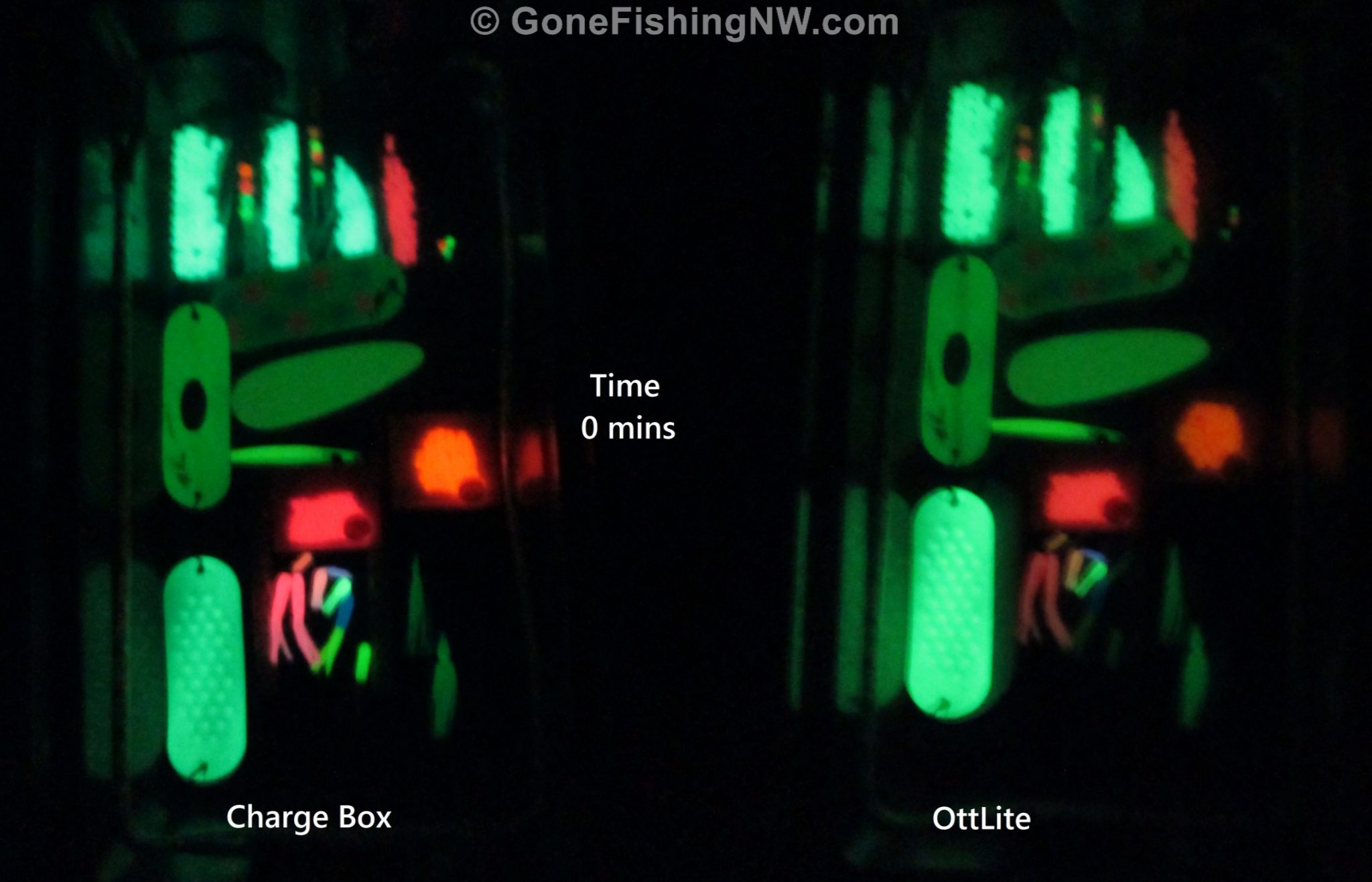 If you’ve been following my articles you know that recently I built a UV charge box to charge up my glow lures before I put them in the water.  The next thing that naturally comes to mind is how long does that glow last?  Do they need to be recharged every 10 mins?  30 mins?  Just once for the whole day?

Other questions I’ve wondered about are “Do UV lights charge better than other lights?” and “Do all lures glow the same?”

To get some answers to these questions I devised a simple experiment.

When I first started thinking about the experiment I had all sorts of ideas on trying different kinds of lights, lures, charge times and such.  However due to time constraints I decided to keep it simple, as I could always run future experiments if the results left questions unanswered.

I settled on 2 charge sources – my UV charge box and a OttLite I use while tying flies.  I felt the OttLite was a reasonable approximation for sunlight.  To keep things comparable, I went with a 5-minute charge time for both sources.

Between charges I let the lures sit in the dark for 24 hours to remove any possible chance of residual glow from the previous test to impact the results.

To reduce contamination from other light sources, after the lures were charged they were left in the charge box, which was closed and powered off.  Then I placed the box in a dark closet.

When taking pictures, I had to turn off the auto features, otherwise as the lures dimmed the camera would adjust and skew the results.  After putting the camera in manual mode I set the ISO to 1600 and bumped the exposure time up.  I used the same settings for all the pictures.

I took pictures every 5 minutes after charging the lures.  Since I have more things to do with my day than watch the second hand of a clock I set an alarm on my phone.  The pictures are taken within 1 minute of the alarm going off.

For lures I settled on a collection of various things from different brands.  I laid them out in the charge box so each one would receive plenty of light, and left them in position, so in the dark pictures we know what is what. 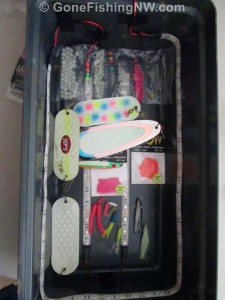 From top to bottom, left to right the lures are:

I felt this represented a decent cross section of glow lures.  There are a few different glow colors.  There are things covered with glow paint, glow stickers, and both hard and soft glow plastic.

What About Charging With A Camera Flash or Flashlight?

Charging glow lures with a camera flash or flashlight are popular.   Due to this I know someone is going to ask why I didn’t test with them.  So I thought I’d just go ahead and answer the question before it is asked.

Initially I wanted to include these in the lineup, but it really is time consuming to run each test.  So I reduced the glow source tests to something that was more manageable.

Camera flash didn’t make the cut because I believe the quick flash, while intense, is unlikely to produce a long lasting glow.  It is also unfriendly to use while out on the water – it requires manual operation to perform the charge.  For example, I can’t just set it up and let it charge while I do something else, like steer the boat or bring up a downrigger.  I also don’t like the idea of bright flashes on the boat while fishing in low light conditions.

Flashlights can at least be turned on and set down somewhere where they can shine on the lure.  Many of the modern LED flashlights are bright enough that they should be able to give a good glow.  However, I didn’t test with them since I felt they were unlikely to do any better than the OttLite test.  So it seemed I had that equivalent class covered.

Now you should have a good understanding of how I conducted the test.  Time for some results.  The UV charge images are on the left and the OttLite on the right.

I took these pictures immediately after they were charged.  Looking at them side by side we can see that the charge from the UV charge box is a bit stronger, especially for the reds & pinks.  Perhaps the largest difference is in the lower right – those hoochies and Radical Glow soft plastics are notably different. 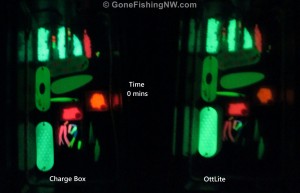 These pictures are after the lures have sat in the dark for 10 minutes.  The glow on the middle section – the dodgers and coho killer – is almost completely gone.  The hoochie glow is also almost gone.

Everything else is noticeably dimmer.

After 20 minutes of being in the dark the reduced charge is even more significant. For the OttLite the red/pink beads are almost done, and the charge is faint for the UV charge box.

At 30 minutes the colored glow has given out completely for the OttLite, and the glow is pretty faded.

Once we reach 35 minutes the glow is pretty faint for everything.

And The Winner Is…

The UV glow box outperformed the OttLite in every category.  Also interesting, and unexpected, is how different the various lures performed in the test.

The UV charge was visibly brighter from the beginning.  So if maximum glow is the goal, then UV is what you need.

The UV charge lasts longer than the fluorescent light.  It dims slower, resulting in a longer lasting glow.

Colors other than the standard glow green the difference with the UV charge is quite significant.

The hard plastic beads lasted significantly longer than the soft plastics like the hoochies.  Like the glow tape this makes sense as the beads are solid glow material where the soft plastics are not as big and may have non-glow colors mixed in.

Not All Glow Lures Are Created Equal

I was very surprised the coho killer faded out so fast, along with a couple of the dodgers.  What was really interesting is that my two glow dodgers from Seps had significantly different charge times – indicating the paint used or amount of paint varied between the dodgers.

What Does This Mean For Fishing?

Now we have to take these conclusions with a grain of salt.  I’m sure that fish eyes are much better adapted to see in the dark than I am, or my camera is.  So what seems like a really faint glow to me, may be quite bright for the fish.

But since I don’t have fish eyes here are the general takeaways I have from these experiments:

Have A UV Charge Box

If you are serious about using glow lures, then you need to have a good way to charge them.  From my results it seems hard to beat a UV Charge box that you can drop lures in, and then get them out when you need them.

You can be like me and build one, or buy one.  Here are some which are commercially available:

If you are into using glow lures, then it is worth a quick test to see how well that lure holds a charge relative to others you have.  Like the difference in my Sep’s dodgers, it could be some lures just don’t have much of a glow regardless of what the package says.

Refresh The Charge On A Schedule

Refresh the glow on your lures regularly.  The schedule should look something like this:

No Need To Rush

In the past I always felt that I had to get the lure in the water as quick as possible after charging its glow.  Now I know there is no rush – the glow can last up to 40 minutes – so you have the time to let out your gear smoothly and correctly.

What do you think of this experiment?  Was it helpful?  Did I miss anything major?  If you fish with glow lures often, and if so how often do you recharge them?

Please take a minute and sign up for my weekly newsletter.  You’ll receive notification of the latest news and articles. 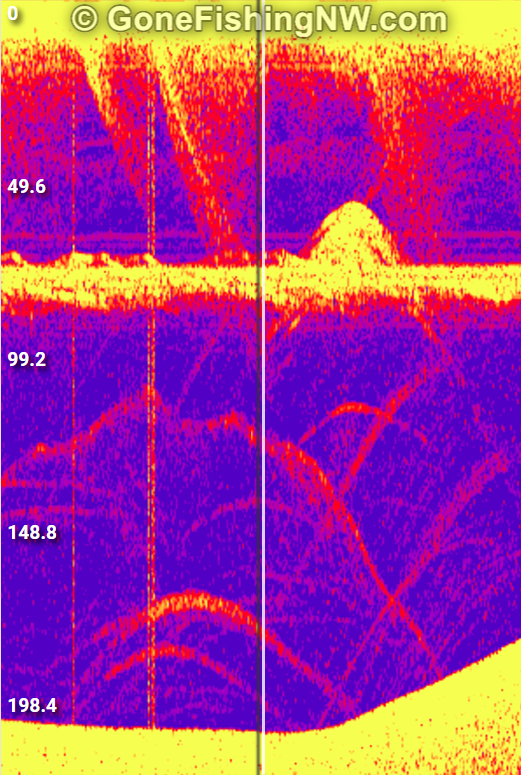 Why Your Fish Finder Is A Waste Of Money

3 thoughts on “How Long Do Lures Glow?”