Recently I spent 2 mornings fishing Lake Wenatchee for sockeye with some friends.  The fishing was hot and we had a great time.  Everyone went home with their limit of sockeye on both days.

Overall we used the techniques and information located on the sockeye fishing guide.

The first morning we launched early at the State Park.  It was very busy and hard to find room to beach the boat to collect everyone after the truck was parked.

However once we were fishing on the lake we had plenty of room.  In fact we were pretty much alone at our favorite location for the first hour or so.  It was great being on the water as the sun came out. 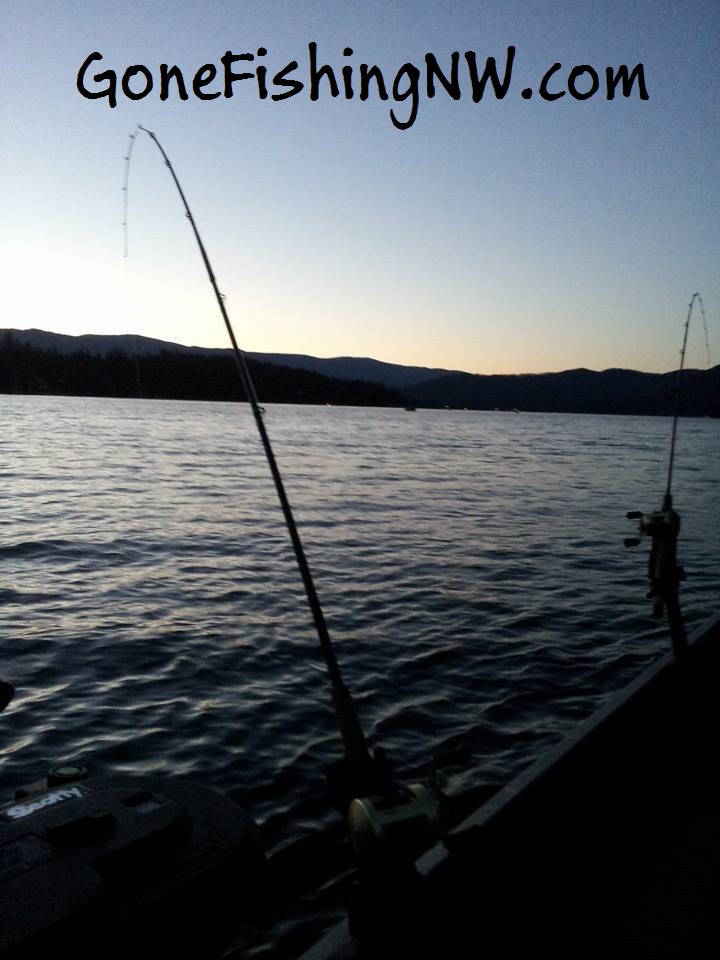 That first morning we quickly limited, aided in large part by 4 doubles and 1 triple.  We, of course, didn’t land every fish.  But we did have a fairly good hookup to land ratio.  A few singles and we managed to round out our limit for the 3 people on board.

We had multiple fish that after hitting out gear would do a death rolls and get all tangled up in the line.  In one way this was nice because it kept the fish from escaping, it did mean it took a while to untangle our line from the fish.

The second morning was both similar and different.  It was similar in that the locations, depths and lures were the same.  We got plenty of bites like before.  However unlike before the bites were lighter.  Missed hookups and fish throwing the hook were, unfortunately, the rule not the exception.

The fish were a bit different this morning too.  They fought harder and were brighter (although no one would mistake them for chrome fish).  We believe we hit a batch that must have reached the lake fairly recently.

We still managed to get a limit for all 3 of us, but it took several hours longer than the previous time.

The fish also seemed to prefer a bit faster trolling speed on the second day – around 1.1MPH, instead of the 0.9MPH we used the first day.

Generally at first light we had the best success with NSR style lures behind chrome dodgers.  During that time we were getting fish 60-70 feet deep.

After 7:00 we started having better success on UV dodgers and lures.  Hoochies also started doing much better than earlier in the morning.  The biters were also a bit deeper, 65-75 feet.

In addition to our presentation (lures, depth and speed), I feel a couple things which gave us an advantage over other boats were:

Get out and give it a try.  Tight lines!