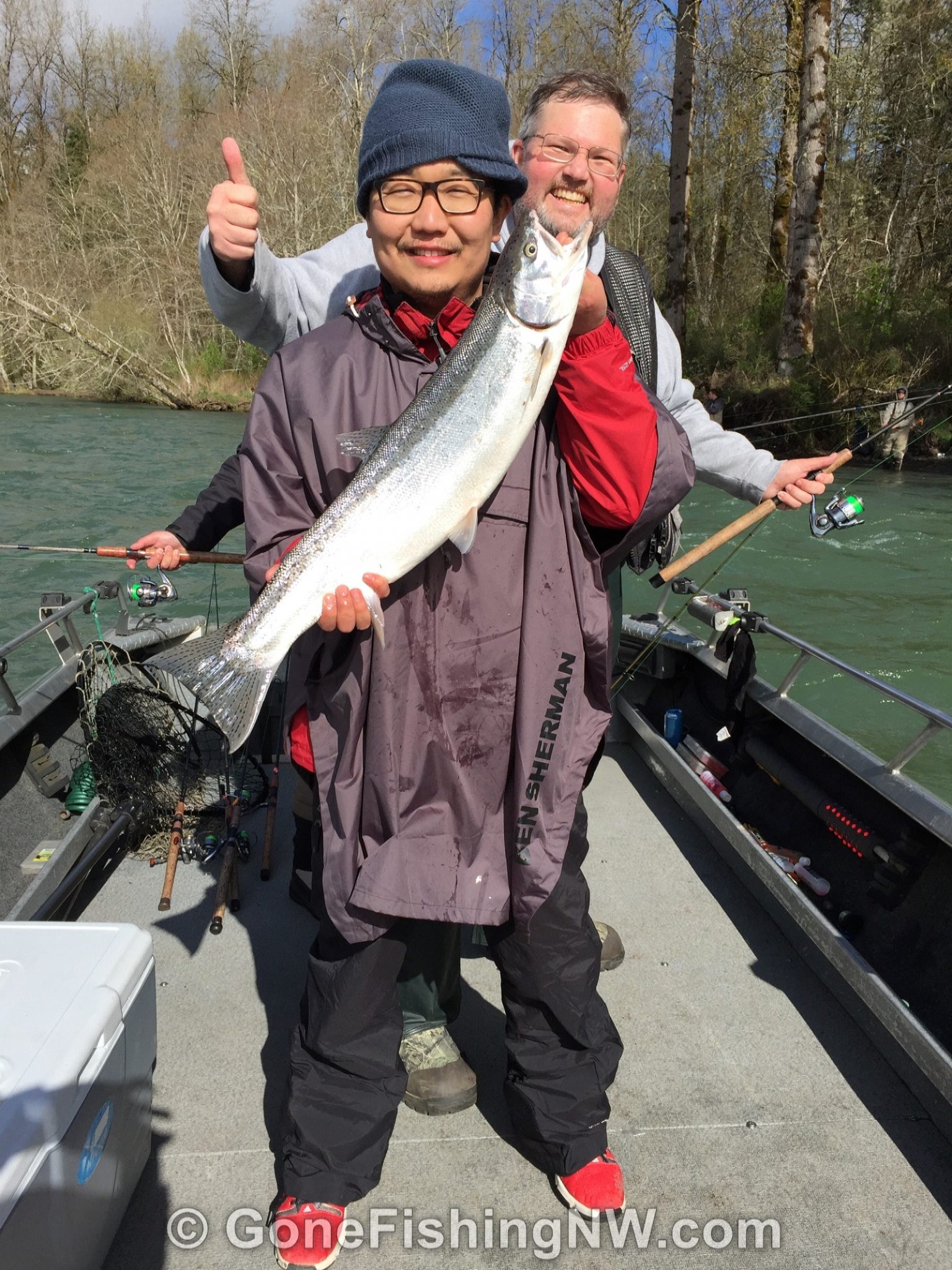 This year, 2016, saw the seventh instance of Steelheadaganza.  Steelheadaganza is a guided fishing trip I organize each year for my friends and I to get out together for some fun, fishing and good times.  Even though I have my own jet sled and fish for steelhead (and other species) out of it, Steelheadaganza is something I look forward to.  It is a time for me to just relax and focus on fishing, without having to worry about prepping the gear, drive the boat or clean up afterwards.

The Starting Line Up

This year we had the largest turnout ever.  A total of fourteen people signed up.  With that large a crew we had to arrange four guide boats.  Fortunately, we start planning this far enough in advance that we can get those major details sorted – especially with Todd Daniels to help coordinate all the guides.

The guides we used included Todd Daniels and Bonner Daniels – who are great guides and our mainstay for this event year after year.  Jared Sather and Rob Sween rounded the guides.

We targeted the Cowlitz River, which is considered to be western Washington’s premier hatchery steelhead river.  Like many other people we targeted ground zero – Blue Creek.  Like other hatchery holes, the fish stack up in the area trying to get back in.  Being a weekday the number of people was a bit less than the total craziness of the weekend.

We met up dark and early, and then carpooled down to the boat launch where we met the guides.  They had the boats in the water ready to go, and we quickly jumped in and got to fishing.

This years group included a lot of repeat Steelheadaganza participants as well as a few people doing it for the first time.  With a couple of newbies in the group, the guides took the time to explain how the fishing goes and coaching with casting.

Lets Get To Fishing

Each boat has their own stories as to how it went, where they got fish and funny things which happened.  But since this is my story, it will focus on the boat I fished in.

We fished by side drifting, where the boat is positioned at the head of a drift and slowly slips downstream.  You can towards the bank, generally at a 45 degree angle upstream.  Your gear and boat slide down at roughly the same rate.  The rig used has a pencil lead weight at the end of the mainline to get the gear down, and at the end of the leader is typically a yarn ball.

We started by fishing the willows area downstream of the launch.  We saw a few people hook up, but we didn’t have any luck.

One of the guys in the boat was relatively new to fishing, and required coaching on how to effectively cast.  Knowing this we put him next to the guide so he could get that coaching while the rest of us focused on our fishing.  After a few hours of practicing and coaching he was able to make those precision casts that are needed close to the bank.

After a few passes at the willows we moved on to the wall.  Here we hooked a couple of fish and got one to the boat.  Eventually the bite died off there and we went back to the willows.

While fishing that area one of the guide boats in our group got into a little bit of trouble.  A different guide, not part of our group, had a net malfunction and lost the net part in the river.  So Todd, being the nice guy he is, motored close to pass over his net, so they could net the fish they were fighting.

When not actively fishing, Todd keeps his rods stacked in a corner of the boat.  Well, while handing the net over it got caught in all those rod tips.  Todd leaned over the side to work on getting them free and was holding on to the handle of his jet outboard.  While doing this the key snapped off in the ignition.

While dealing with all this mess, the boat drifted into shallow water and ran aground.  With some help they were able to get back afloat, but without the key the jet wouldn’t start, so they couldn’t run back upstream.

With some work the stub of the key came out of the ignition.  Fortunately, Todd had a spare key in his truck.  Someone gave him a ride back and forth to the launch to retrieve it, and then he was back in action.

The Men with the Golden Boots

Our guide noticed a couple boats hooking up towards the end of the willows drift.  It took a couple passes but we figured out the fish were right up on the shoreline.  Once we figured that out we had a good run of consistently hooking up on almost every pass.

In that area of the bank were two men fishing from shore.  I started calling them “The Men with the Golden Boots” because I would cast my line – aiming for their boots – and hook a few within a few seconds of my line hitting the water.

I thought it was quite funny, but they didn’t seem to appreciate fish after fish being roped out from under them.  All part of the game though.  Unfortunately, they didn’t seem to understand what was going on – instead they continued to cast right over the fish and not hook up.  You’d think seeing fish hooked a few feet away from you would be a big clue as to where to cast.

Eventually the bite died there too.  But just as well since it was lunch time.  All the boats met back at the pre-ordained spot where the guides provided a lunch of hot dogs, chips and cookies.  This was also a fun time for swapping stories from the morning.

Finishing Out the Day

After lunch we went back out to fish for a few more hours before calling it a day.

The pattern of fish was a bit different from the morning, and the boats hooking up were fishing the far shore across from the hatchery.  We worked that section and were rewarded with a double.

Fighting the fish during the double was total fun – dancing around each other trying to keep the fish separated and prevent the lines from tangling.  I’m pleased to report we got both fish on board.  That finished up the limit for our boat.

We had a little bit of time to kill before the meet up.  We thought about targeting springers, but didn’t have enough time to switch up the gear.  So instead we found a nice shady spot to relax in.

Then the appointed time came and all four boats gathered together.  We counted out all the fish across the boats – we ended up with twenty-three fish for the fourteen anglers.  Everyone had fought fish, but one guy didn’t land any.  Lucky for him some people felt like sharing one of their fish with him.

Several people caught their first steelhead, which is totally awesome.  I told some of them that it is tradition to eat the heart, but they weren’t buying it.  Well, it worked once a few years ago…

Generally speaking, the people with more fishing experience did better with hooking and landing fish.  Guides help a lot, but what you do matters too.  Being able to precision cast, avoid tangles and keep out of the snags add up to more time where your gear is in the zone – and that equals more fish hooked.  Its all part of the game – you have to put in the time to get the results.

I think I’m finally cluing into that it might be good to have a practice session of sorts to help people warm up a couple days before the trip.  That might account for some additional fish next time.

All in all this was a very fun trip, and we enjoyed a lot of success.  Time to set the clock to count down to next year’s Steelheadaganza! 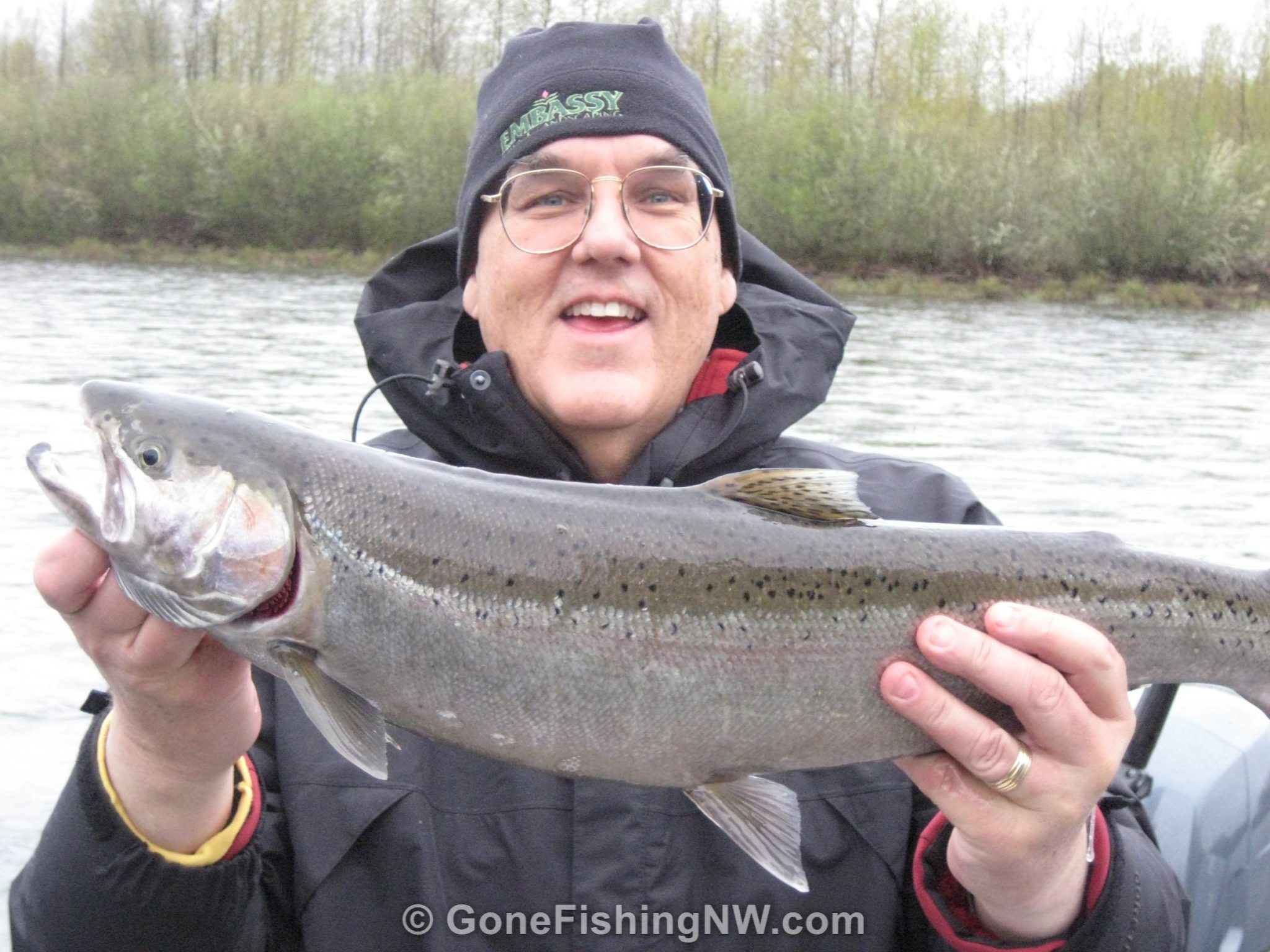 Best Guide To Sidedrift For Steelhead