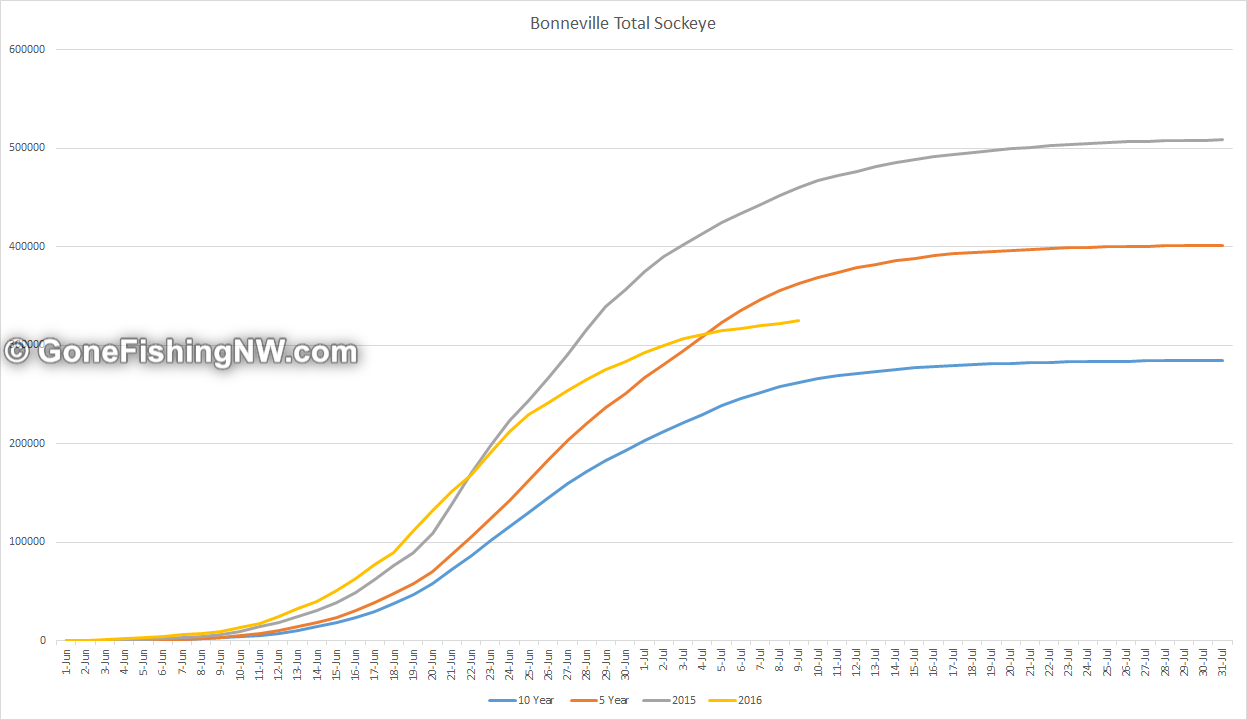 The sockeye run continues.  As the early numbers indicated there is both good and bad news.

The Lake Washington and Columbia river runs have progressed enough that we have a good idea what the rest of the run will look like.  Unfortunately, the pre-season estimate is greatly off in both cases.   Some people have expressed a lot of negativity for the WDFW being off on their estimates.  While I also would like better estimates, I must admit I think it must be a hard job.  Seems to me that the science behind estimating salmon returns is probably not very developed, and plagued by difficulties in getting good data.

The Lake Washington run is disappointing – again.  The pre-season estimate was 119 thousand, which wouldn’t be enough for a fishery, but at least a much better year than recent history.

As I write this the published data for the number of fish crossing Ballard Locks fish ladder is just over 40 thousand fish.  Following the trend line out, it seems that the run will end around 50 thousands – under half of the pre-season estimate.

The Columbia River sockeye run is a bright spot.  The pre-season estimate was 101 thousand fish, and the current count is 325 thousand.

The WDFW has responded to this larger run by opening up sockeye fishing on the upper Columbia all the way up to Brewster Pool at the mouth of the Okanogan.  That is a great place to fish with consistently warm weather and the chance of hooking into a king while targeting the sockeye.

The trend line indicates the run will likely finish around 350 thousand.  In about a week we should be able to tell how many of the fish are making the turn up the Wenatchee river.  Odds are we’ll see enough that Lake Wenatchee will be opened to sockeye fishing.  If so the announcement will likely come the 3rd or 4th week of July.

This year’s estimate was the smallest of the 3 major runs, but was a record for Baker.  The estimate was 55 thousand.  This is for the total run, before the tribes net their half in the river.  Still that left about 27 thousand which could potentially reach the fish trap.

Before those fish reach the lake, some are sent to the hatchery instead.  My guess is that the hatchery will take about 9 thousand fish.  Which should leave about 18 thousand to get transported to the lake for recreational fishing.  To date the hatchery has received 2 thousand fish and the lake 10 thousand.

It’s hard to say at this point if the run is going to exceed the estimate, or if it is just running a bit early – like the Columbia run.

Fishing reports are mixed.  Those who made it up for the early opener seemed to do well.  But as more people showed up the lake and boat ramps became crowded, and all the fishing pressure has been suppressing the bite.  The pressure is unlikely to let up given the popularity of this fishery and the fact that the campsites are all booked up.

Regardless of your favorite spots to fish for sockeye, more information about fishing for them can be found on the sockeye page.

What do you think?  Where is your favorite sockeye spot?