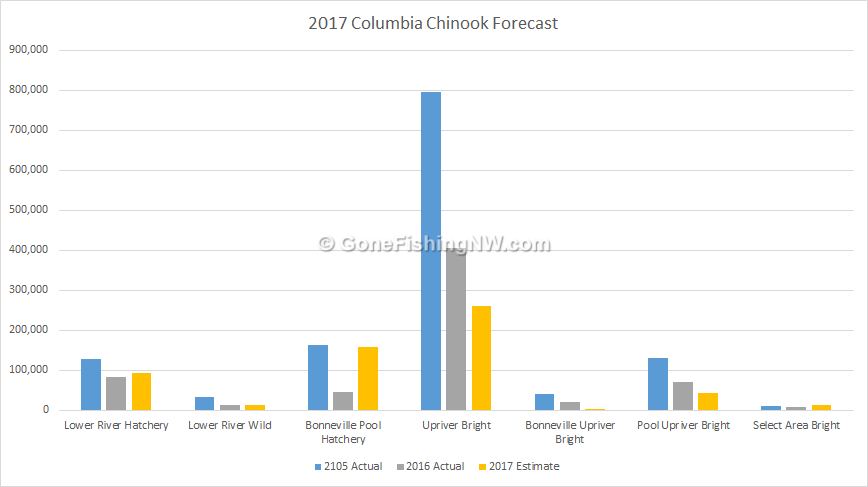 Last year was a low point in Washington State salmon fishing.  Low returns, conflicts during the North of Falcon process and numerous closures made up the year.  Whatever you blame – The Blob, habitat destruction, over harvest, dams, global warming or the 2016 election – this year continues the overall trend of poor returns.

Generally, the forecasts look better than 2016, but almost all are below the 10 year average.

While we like to think of salmon forecasts as this nice scientific thing where there is good data being fed into well understood models, the reality seems to be that is it educated guesses based on incomplete data.  So I feel the numbers should be taken with a large grain of salt.

My summary of the forecast is below.

For those who fish Puget Sound and associated tributaries this is likely the worst news.   This year the estimate is 1.1 million pinks returning to Puget Sound waters.  This may sound like a lot (and it is compared to other species) but it is just a tithe of the 6+ million we’ve seen during the last several pink returns.

It would not be surprising if pink fishing opportunies, especially in freshwater, are limited.

Given the pink salmon lifecycle it will likely take several generations to recover back to 6 million, even assuming ideal spawning conditions.  So this year is a foreshadowing of the next decade.

Click here to learn how to catch pink salmon. 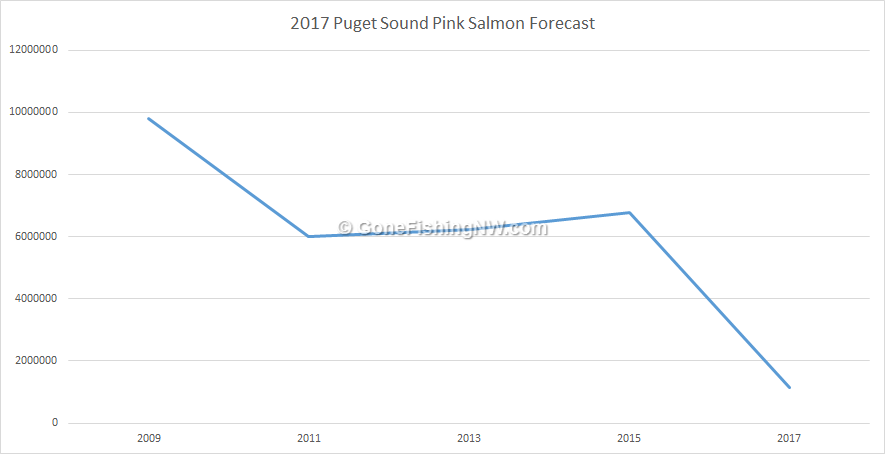 Compared to last year the results are mixed.  The forecast is down for some rivers, while up for others.

Hood Canal and the Nisqually continue to have the highest forecasts for the region and are up from last year.  The Deschutes earns the “most improved” award compared to 2016 with 18 thousand fish forecasted.

Forecasts for the Nooksack is down, but still ranks #3 for the region.

Overall we should see more chinook fishing opportunities for the Puget Sound area. 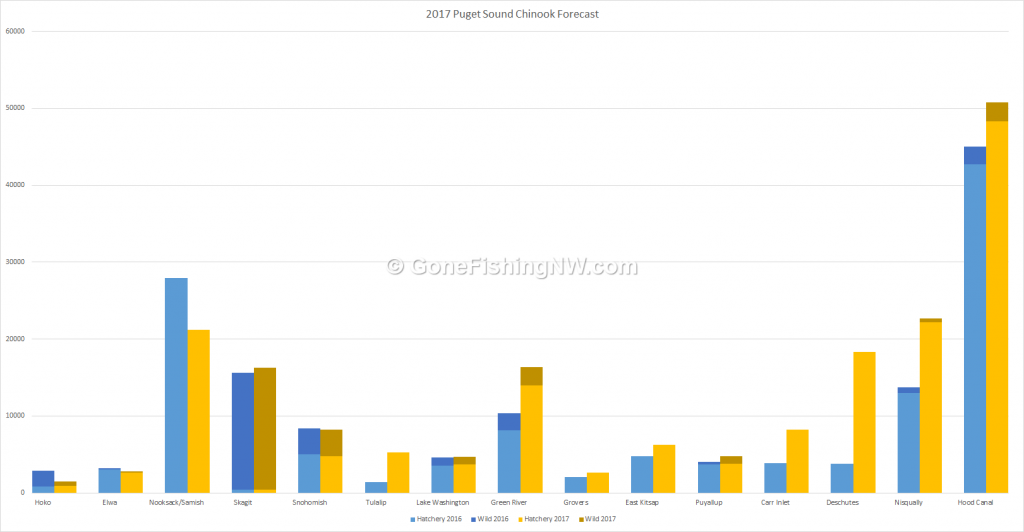 2016 saw decreases in all categories of Columbia River Chinook.  2017 continues that trend with more decreases across the board.  The Bonneville Pool Hatchery category is the only one which shows significant improvement from last year.

Even with this bad news we are looking at over 580 thousand chinook swimming up the Columbia this year.

Last year we saw very low forecasted returns and many closures.  However there were some late season openings, when fish entered the river and the return could be better estimated.  It is unclear to me if the fish in the river were due to higher than expected returns, or due to the lack of saltwater fishing.

In any case this year most river systems are seeing higher forecasted returns.  Even if not on par with years like 2015, it is much improved from 2016.

My guess is we’ll see most areas open with a modest daily limit.

Please note the Grays Harbor and Queets estimates are not out yet. 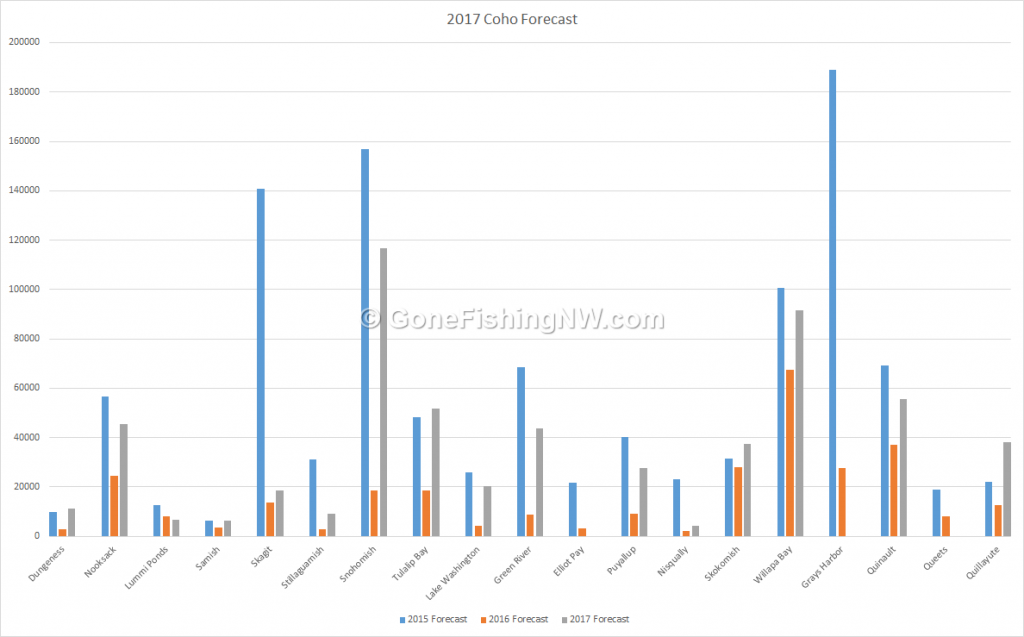 It seems to be a trend that the Columbia run of sockeye get under estimated.  Last year saw a great fishery in Lake Wenatchee.  The forecast this year indicates that it should be good, although perhaps not as good.  Likewise, the fishing in Brewster Pool should be good.

The Lake Washington estimate is no where close having a fishery this year.  If the past few years are any indication we’d be lucky to have the actual return meet the estimate.

Last year Baker Lake saw an in season reduction in the estimate from 55 thousand to 40 thousand fish.  Combined with water conditions for many people the fishing was not very good.  This year’s estimate is slightly down from last year.  After the tribal netting and hatchery take, we’ll be lucky if 16 thousand make it into the lake for sport fishing. 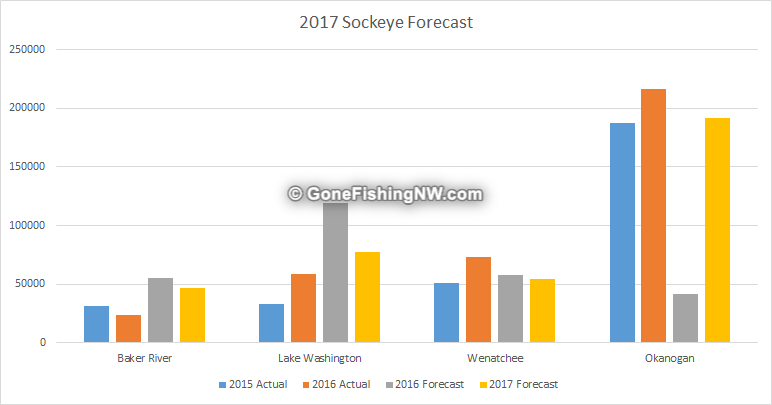 Its great they make the data available, however each document is formatted differently and there is limited historical data.  Hopefully they will start doing a better job in making the data more consistent and easier to understand.

Want to get the latest fishing news and tips?  Subscribe to our weekly newsletter.