January through early March is as much of an “off season” from fishing as I experience.  During that time of year, I get out less often, and when I do I’m looking to do something simple, close by and relaxing.  That usually means putting the boat in Lake Washington and finding those huge schools of perch that hang out this time to year.

My favorite place to do this is the East Channel, usually around the Seahawks training facility.  During the winter months, the perch seek the deeper water to hunker down during the cold.  While down there they form huge schools.  If you can find a school, then fishing can be fantastic. 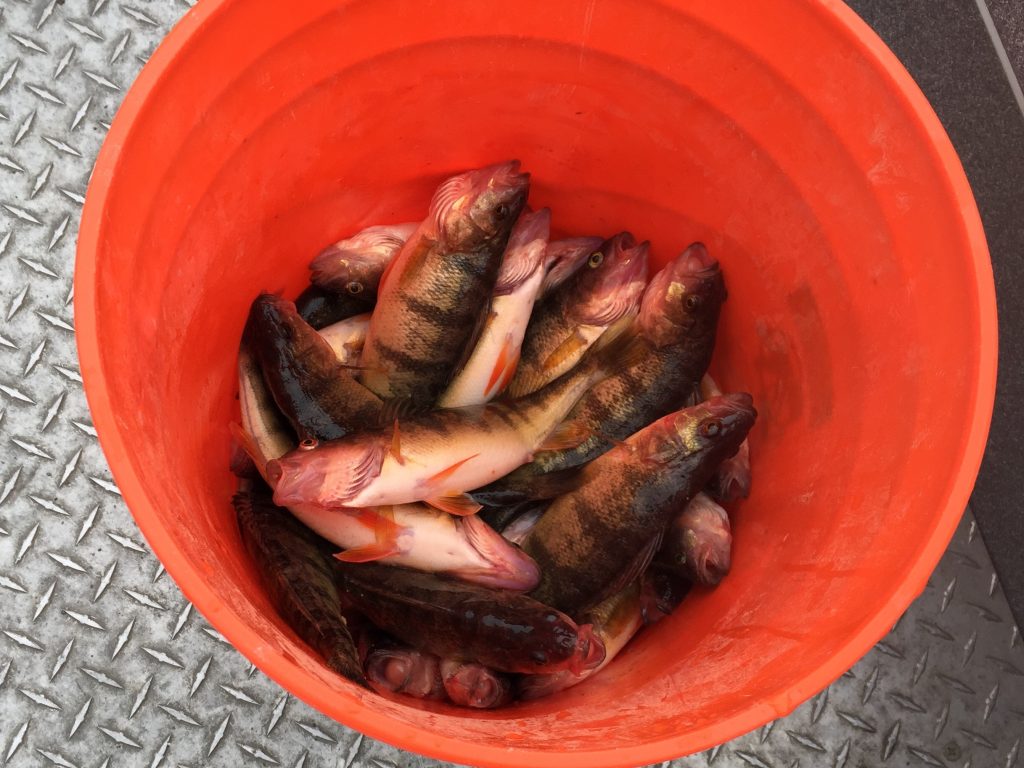 Each time I’ve been out this year we’ve been able to fill a bucket with them.  For the most part we follow the advice in Catching Perch by the Hundreds.

Given the large number of perch in the lake (probably more than any other fish species) there are good spots all over the lake.

To find a good spot, then this time of year I’d find the deepest water in a given area, and motor to it.  Then spend some time cruising around slowly, staring at the fish finder.  I look for small fish arches sitting right on bottom, or suspended slightly above – especially ones grouped together.  Once I found those fish, I’d stop and drop my gear. 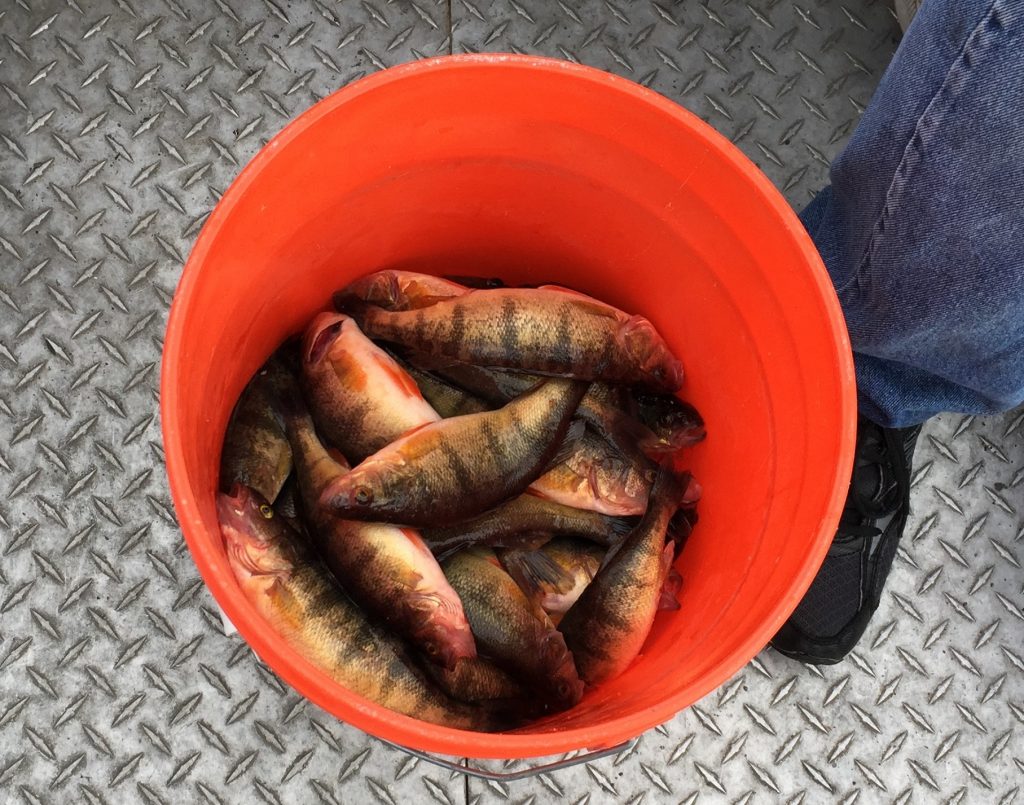 I’ve had the most success for perch with a very simple drop shot rig.  This is a weight on the bottom, with hooks tied off the mainline right above it.  I find that a hook about 2 or 3 inches above the weight works well.  Other hooks spaced another couple of inches above that will also catch fish, but not as often as that bottom one.  Sometimes with multiple hooks you’ll catch multiple fish at the same time. 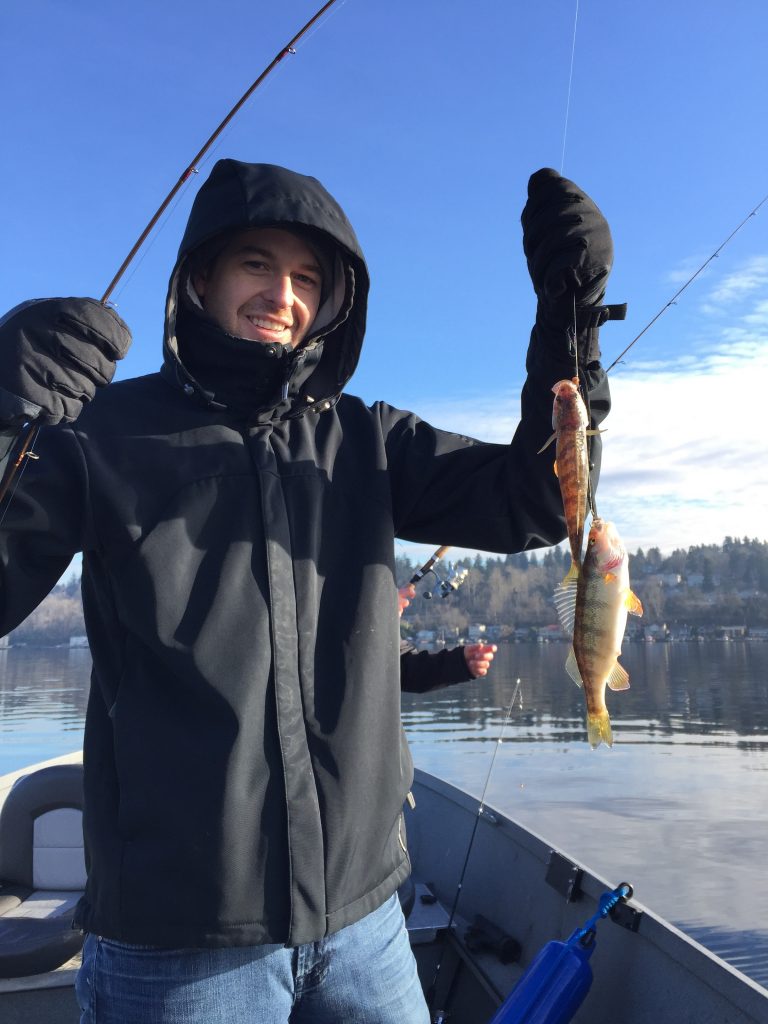 I like using size 6 drop shot hooks, tied on 6 pound maxima ultragreen with a 1 or 2 oz cannonball weight.

Given the depth, I use at least 1 ounce of weight, and wouldn’t think twice about going as heavy as 2 ounces.  That will help get your gear down fast to that 60-80 feet deep that I usually find the perch this time of year.  It also helps keep your gear on bottom when drifting.

The bite is usually a quick short tug.  I find that if I do a hookset like I would for other trout that I usually miss the fish.  What works better is raising the rod at a moderate and consistent speed. 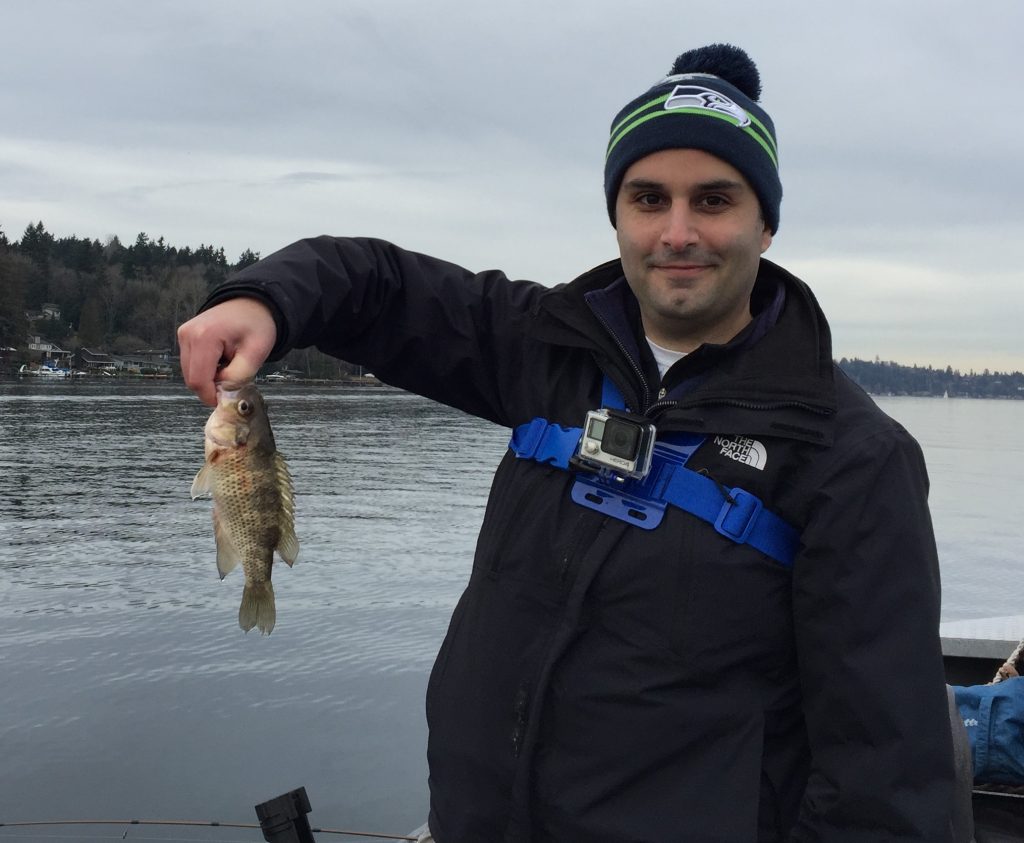 Occasionally while fishing for perch this way we’ll hook other species.  This year we’ve landed several sculpins, a rock bass and an immature chinook salmon.  So, make sure you know the regs for all the species, not just perch. 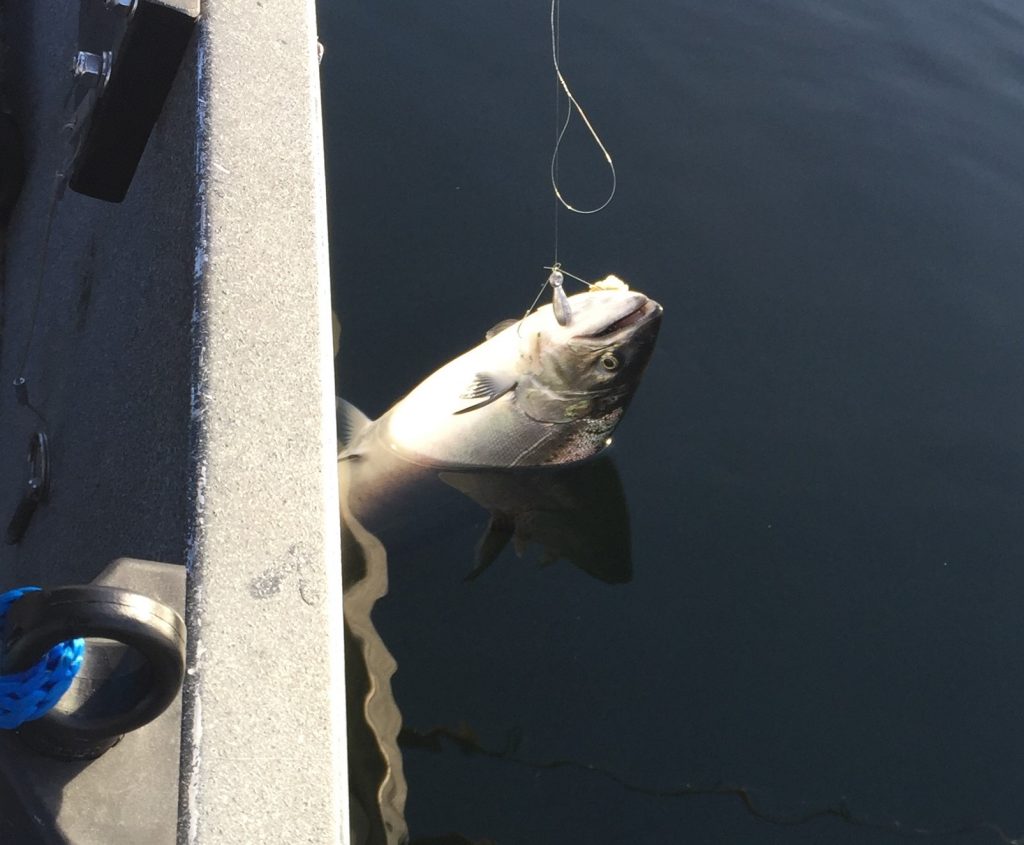 I believe that drifting with the wind is the most effective way to fish for perch.  I feel that sideways motion of the bait helps trigger bites, as well as exposes your bait to more fish.  The best speed to drift seems to be between 0.1-0.3 MPH.

Above 0.5 MPH it becomes hard to catch perch, as in the cold water they can’t keep up with things moving that fast.  Deploying drift socks, or using a kicker motor can be ways to slow down your drift.

One trick I’ll do when drifting faster is occasionally open up the bail, and let out line for a few seconds.  Then close the bail.  Often I’ll get a bite just as the line gets tight again.   I picture a poor perch chasing after my bait – slowing falling behind – and then the bait stops and the perch can catch up, bite it and then feel the hook when the bait starts moving again.  Heavier weights really help with when drifting.

My friends have been getting out and having lots of success too. 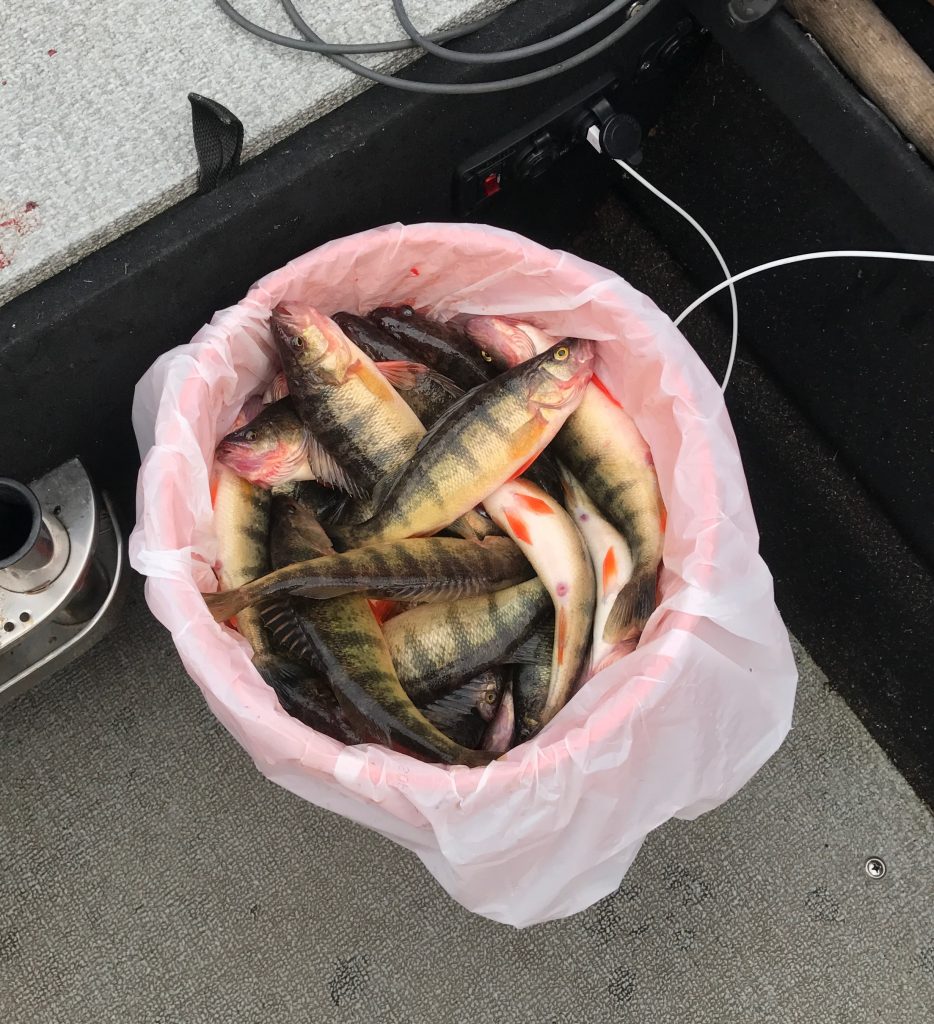 Get out there and give it a try.  It can be a lot of fun, especially for kids or newbie fishermen. 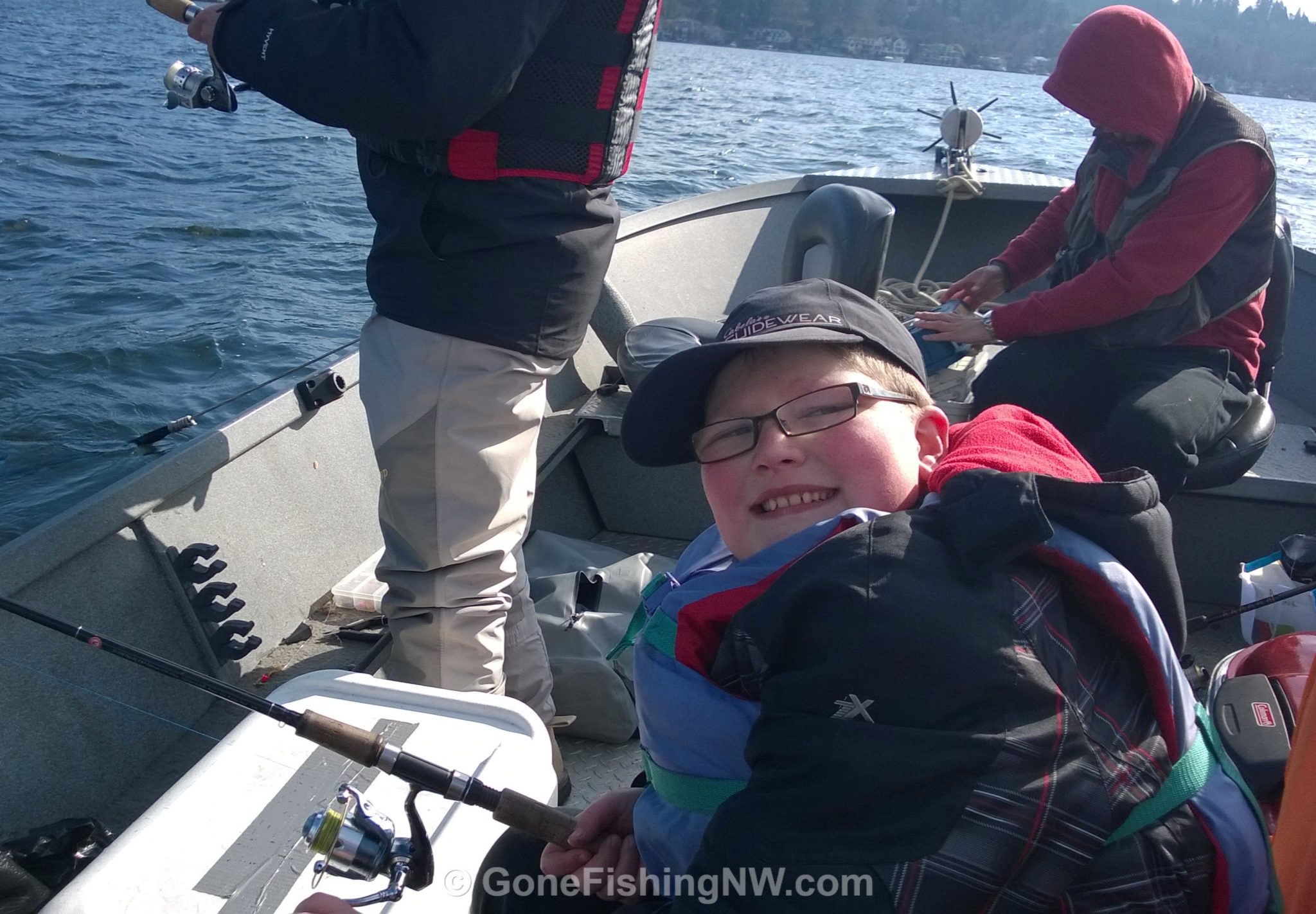