Recently I spent a couple days camping and fishing at Baker lake with a  couple of my brothers.

They are from out of town, and this was their first time fishing for sockeye, so I knew it would be a challenge to ensure we were fishing at full capacity.  By the end they were doing great, but along the way it caused us to lose some fish, and likely not get some bites.

The first day we woke up to the sound of rain.  “Ohh great!  This will be a fun day” I thought to myself.  Fortunately the rain stopped as we were getting ready to leave camp.

Even though the rain was gone the skies remained overcast for most of the day.  I knew having that low pressure system move in over night was going to kill the bite, so I braced myself for a long day of fishing. 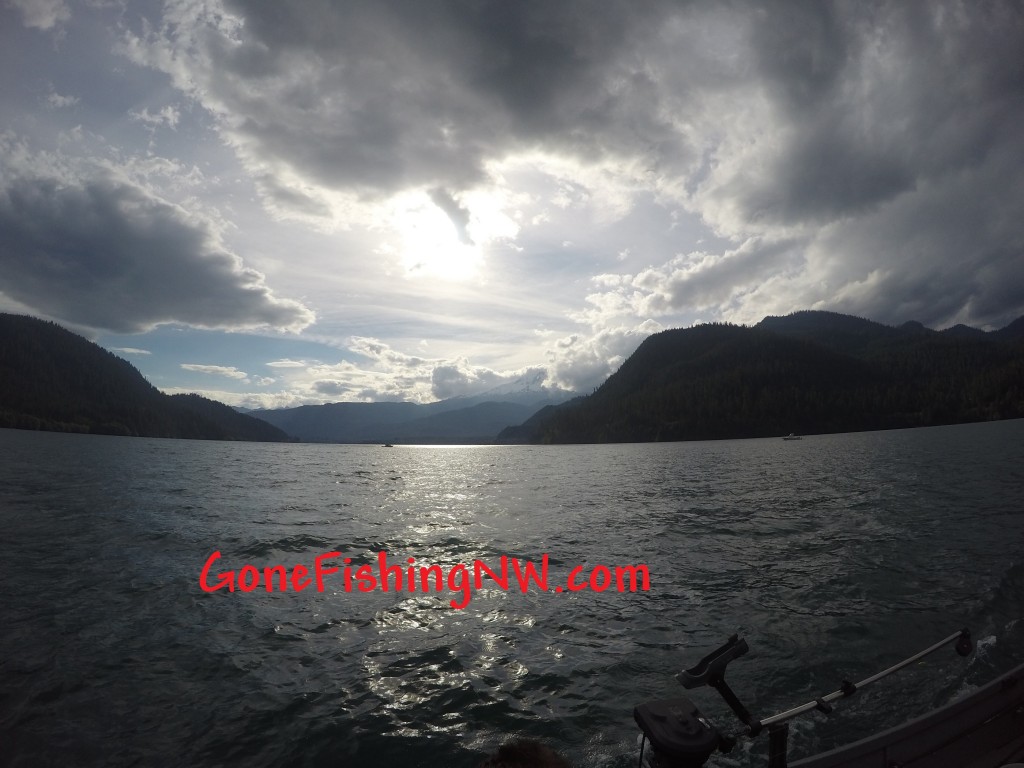 As we trolled around the lake in search of biters we managed to find a few and landed 3 fish of out 9 takedowns.  The inexperience played a part and there were likely a couple fish that might have made it to the boat under other circumstances.

We even had a triple, of which we landed 2 of the fish.  This happened right in the middle of a big group of boats and it is a good thing that looks can’t kill.

We counted ourselves lucky to have had so many bites & fish to the boat.  Most people we talked to hadn’t gotten anything that day.

The next day was a typical sockeye day.  As the sun started peaking over the mountains the bite turned on and it seemed like every boat was getting at least one fish.  We were no exception and got the first fish of the day in the boat pretty quickly. 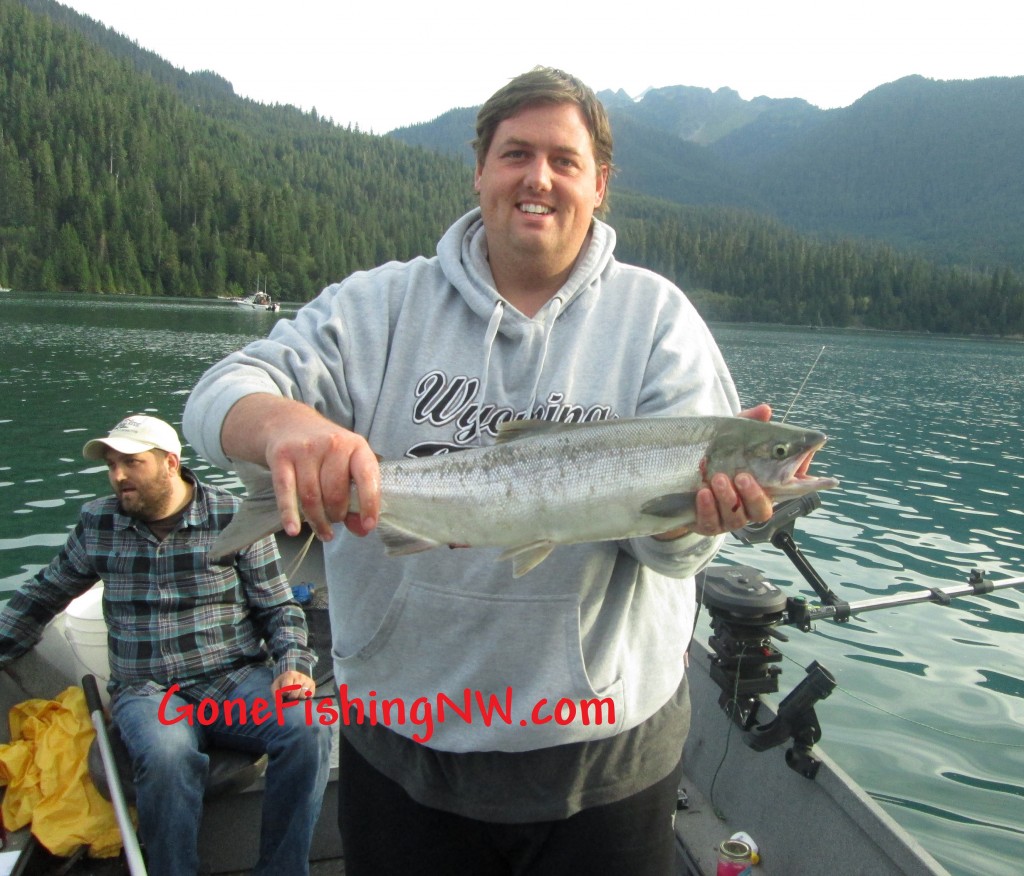 A few times those pesky fish would tangle in other lines, or simply get the leader all wrapped up.  Thankfully I had a bunch of pre-tied leaders, so if the mess was too bad I was able to just cut the line, attach the new leader and get that line back in the water while the bite was hot.

After that morning bite the action slowed down.  We would see a fish caught now and again – occasionally by us.

We found a nice place to take a break from the sun for lunch and to stretch our legs. 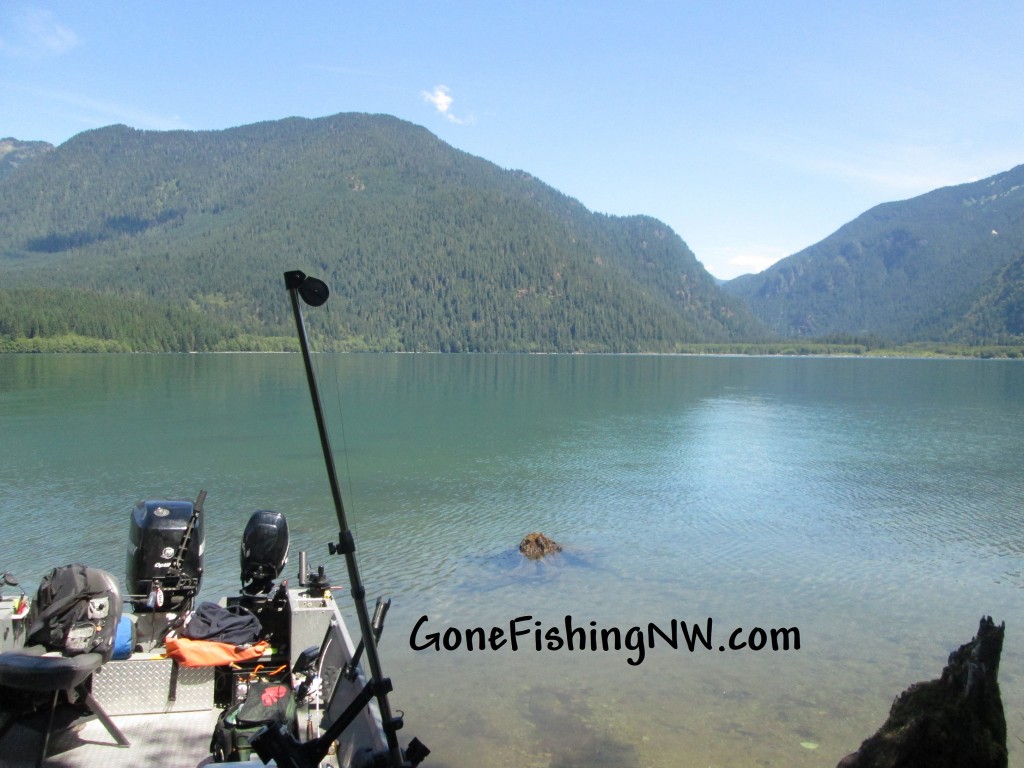 We ended that day boating 9 fish out of 14 take downs. 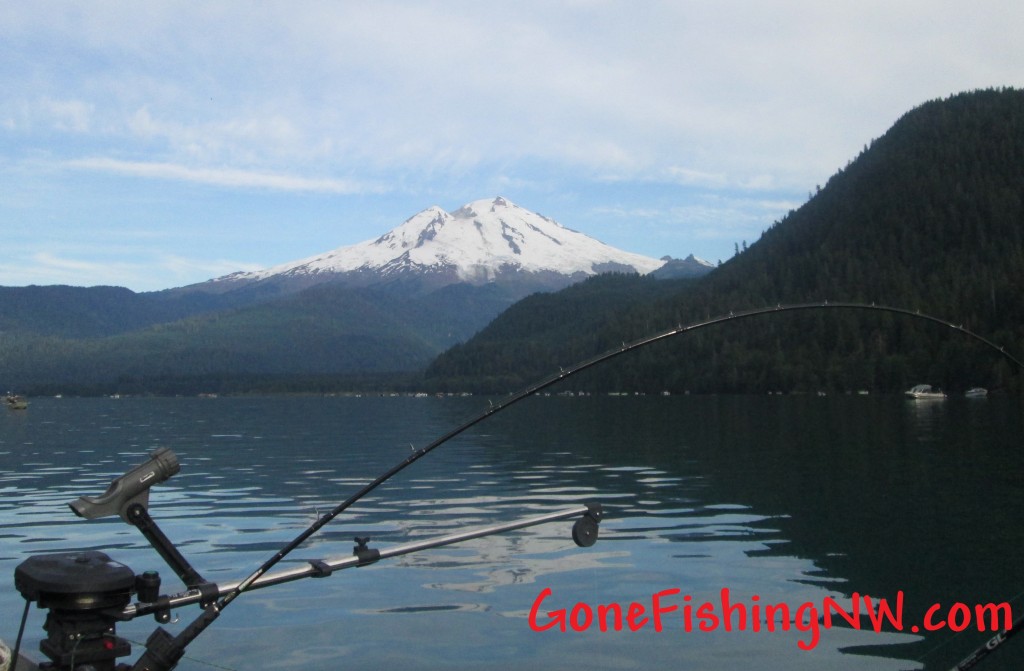 The last day we got a really early start.  The night before I had prepped all the rods with the setups that did best the day before.

We didn’t have lines in the water for more than 5 minutes before we had the first fish in the boat.  I have no idea how my brother saw the bite, as it was so dark that I couldn’t even see his rod.

Unlike the day before there was no morning bite.  Instead there was a pretty steady stream of action.  Probably about every 15 minutes we’d see someone hook up.

We did our share and landed 8 fish out of 16 bites before we had to stop and pack up camp. 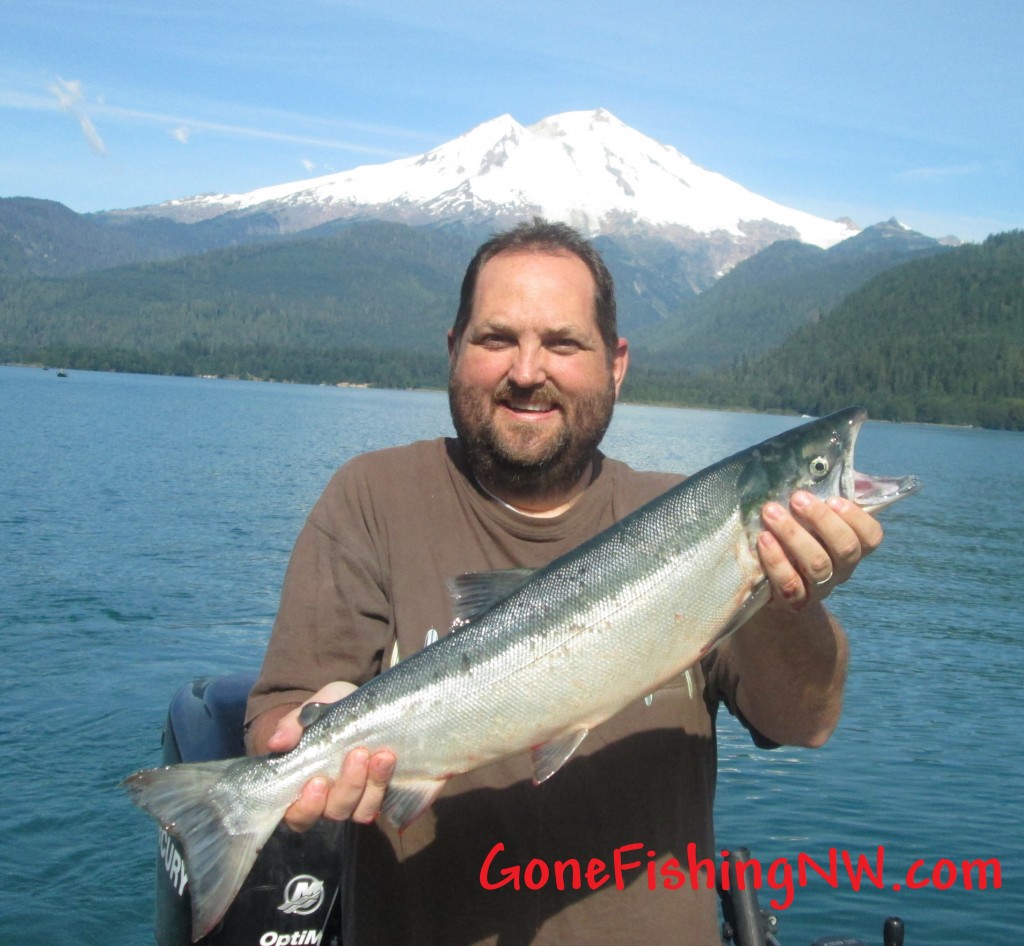 Of course no trip to Baker can be complete without stopping in Concrete for lunch at Cascade Burger. 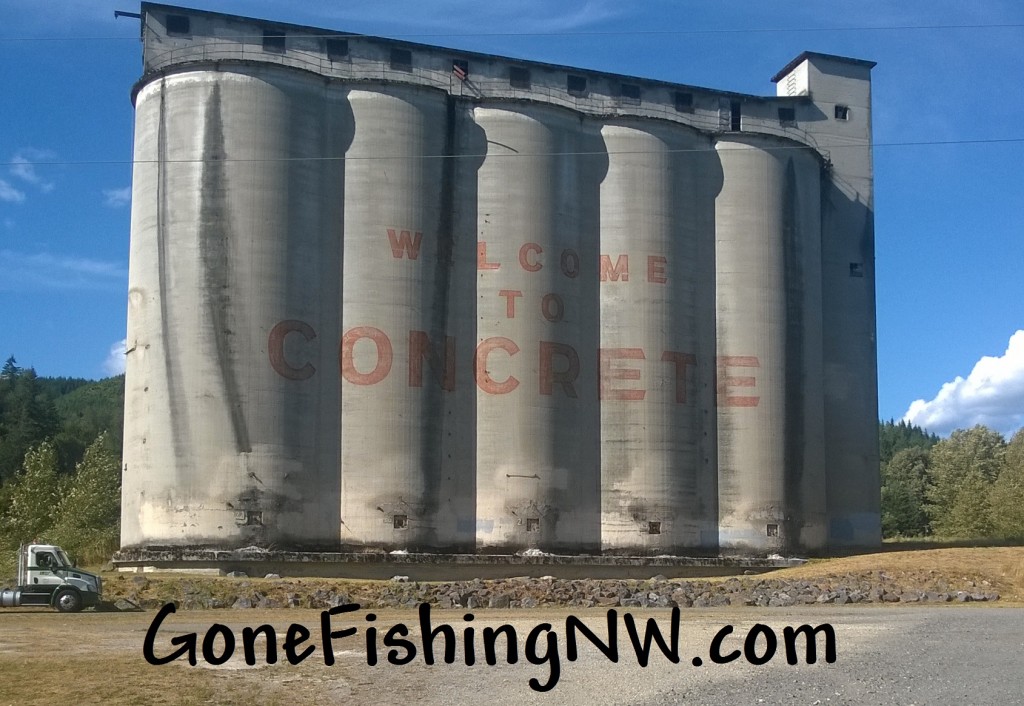 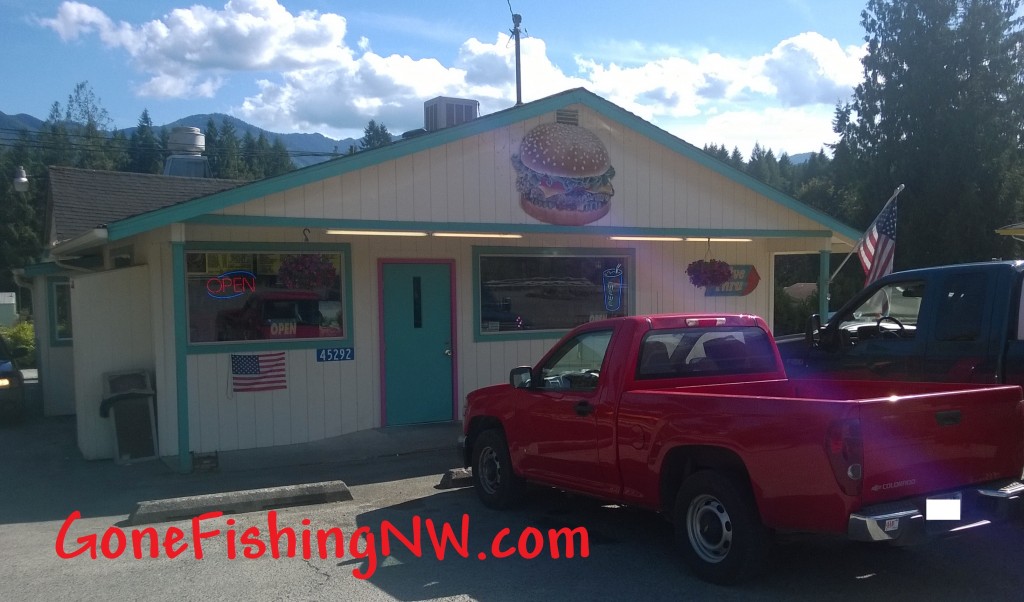 We used the techniques and gear outlined here.  We used a few different baits and scents, but most of the fish came on cured coon stripe shrimp from Holiday Sports.  Although we tried a variety of depths of where we were spotting fish on the finder, we found all the biters between 40-60′ down on the downrigger.