Pink Splatter can be a top performing dodger color pattern for kokanee.  For quite a while I’ve wanted one in the larger 00 dodger size, unfortunately I’ve never seen one for sale.

The pink splatter pattern is a white background.  It has a fluorescent pink stripe down the middle, then a random pink splatter over the rest of the dodger.

Now that you have your dodger blank it needs to be primed for the paint.  This is needed because that smooth polished metal surface is hard for most paints to adhere to.  If you skip this step you may think it all worked out, but then the paint will scrape off easily in your storage container or even due to drag in the water.

For the primer paint you want to use one which will adhere well to metal, such as a self-etching primer or epoxy primer.  The purpose is to give our other layers of paint a nice surface to adhere to.  The color doesn’t matter because we will be painting over it.  I used the epoxy primer because that is what I had on hand. 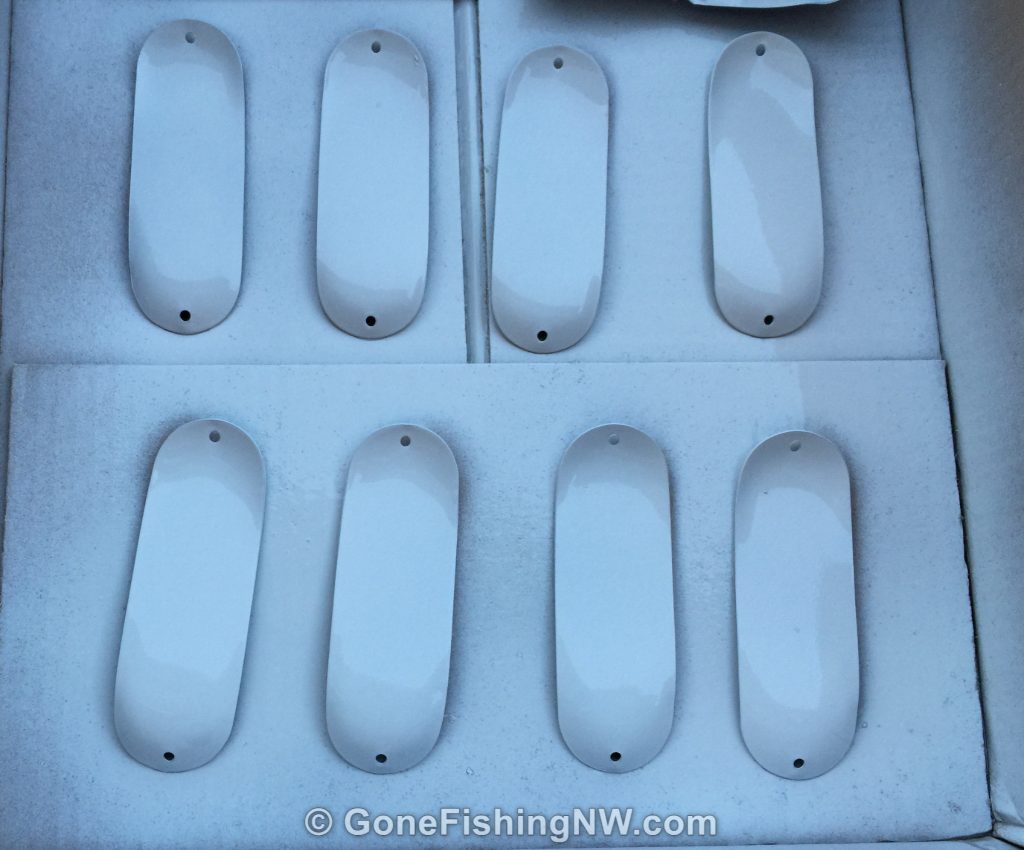 I prefer to prime several blanks at the same time by laying them out on some cardboard and giving them a couple light coats of the primer.  After that side dries I flip them over and do the other side.

Next, we need to apply the glow paint to the dodger.  You’ll need some glow paint and a brush.

The choice of which glow paint will impact how bright the glow and how long it will last.  You may have noticed that some of your glow tackle feels rough to the touch.  This is because the elements that glow are little granules embedded in the paint.  What you may not have noticed is that the larger the granules (the rougher the surface) the brighter and longer lasting the glow.  So, if you want a lure that will really glow make sure you use one with large granules – which implies one you apply with a paint brush.

Here is some more information about how long different lures glow.

I used Glow! Ultra Green, and it worked great. 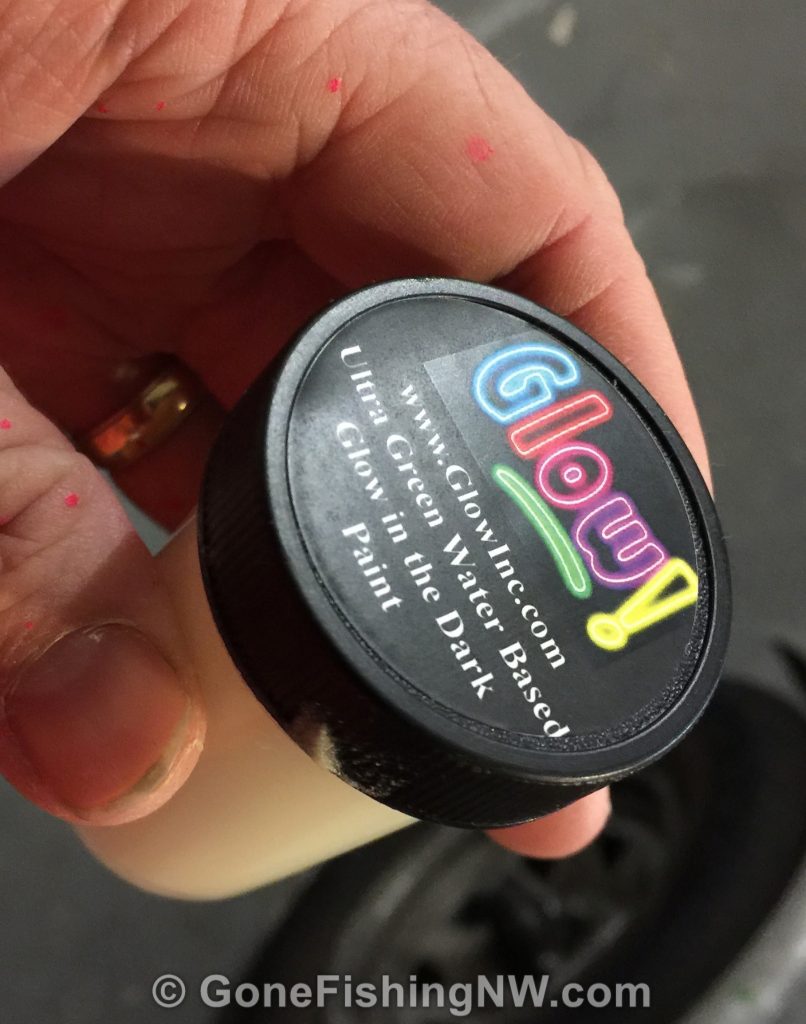 For a dimmer glow consider the spray paint versions.  They have smaller granules to go through the nozzle.

Whatever paint you use, I found it helpful to apply the paint in a dimly lit room and some UV lights.  This makes it easy to see where you have painted and that it is even.  I painted one side, then after it dried I did the other.  One coat achieved good results.

I wanted a solid pink stripe down the middle of the dodger.  There are several ways I could have done this, such as painting it with a brush, or masking it off with tape and then spray paint.

For the pink paint, I used Rustoleum fluorescent pink spray paint.  I suggest avoiding the downward spraying marking paint.  While the color is the same, I found those harder to control and would wind up with too much paint. 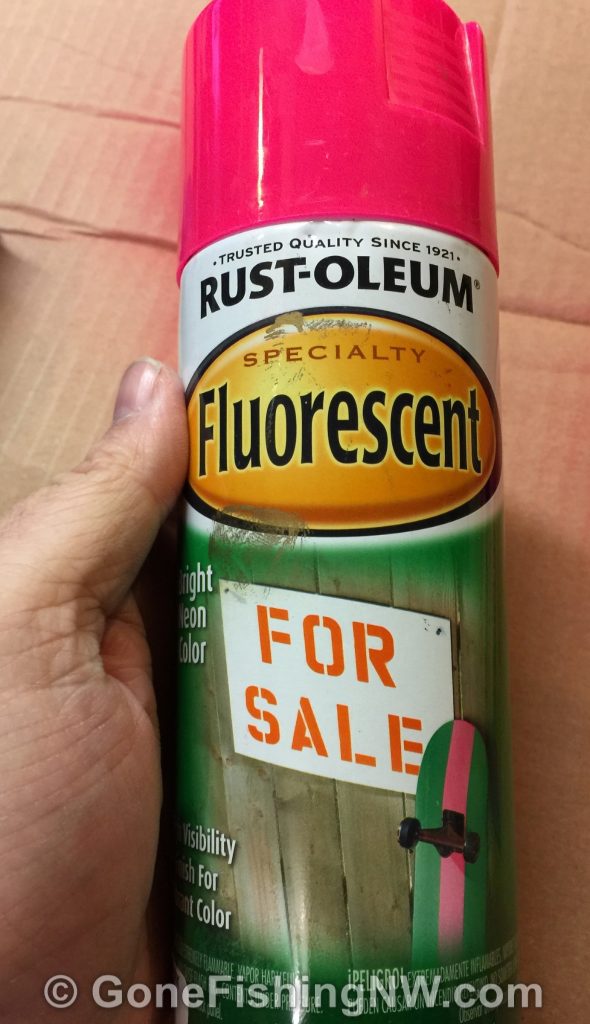 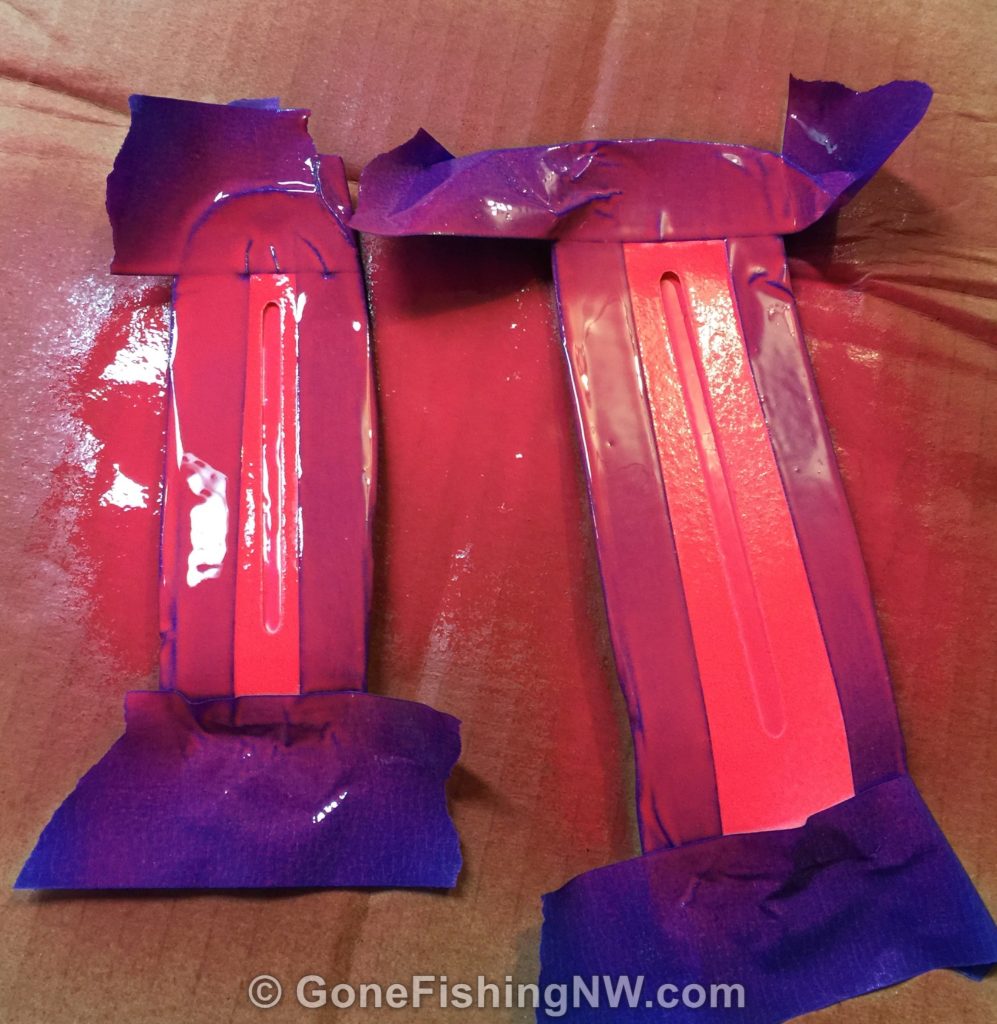 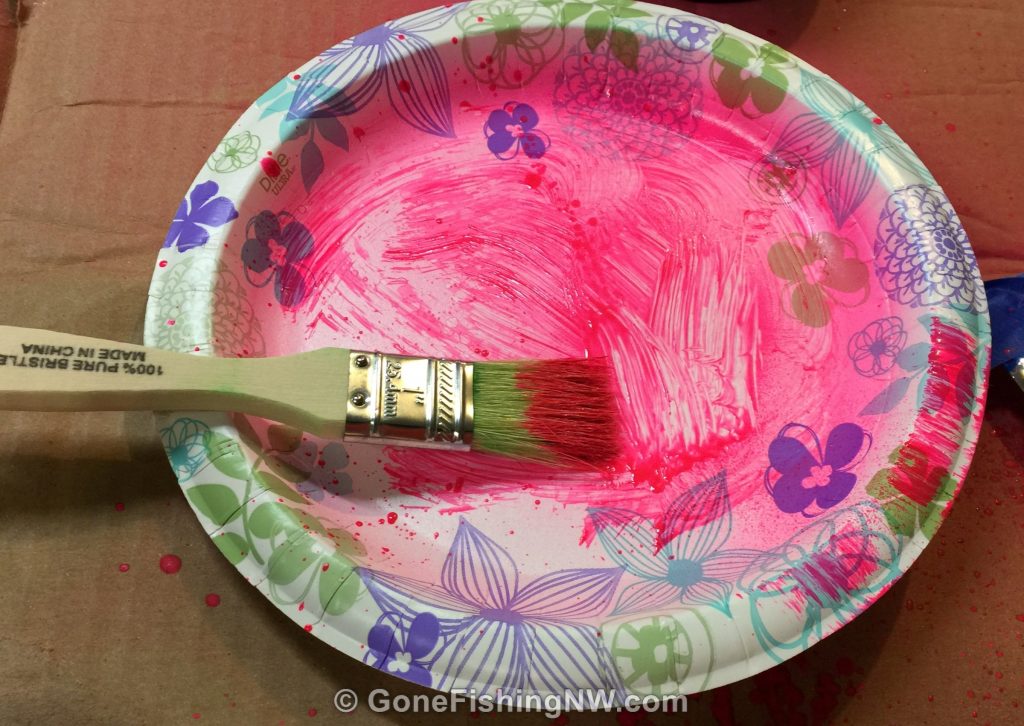 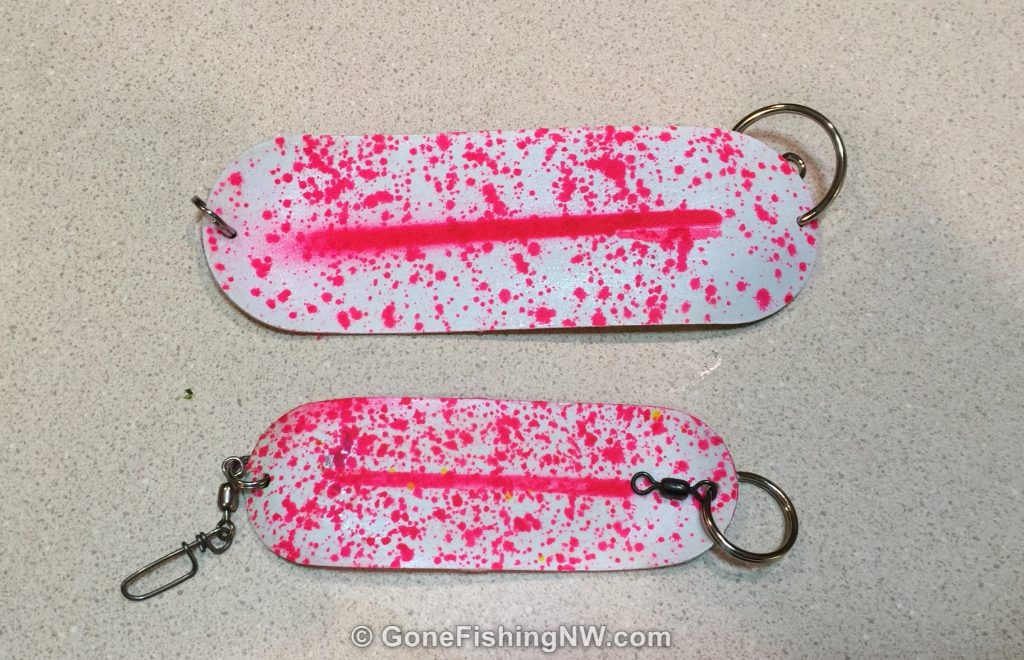 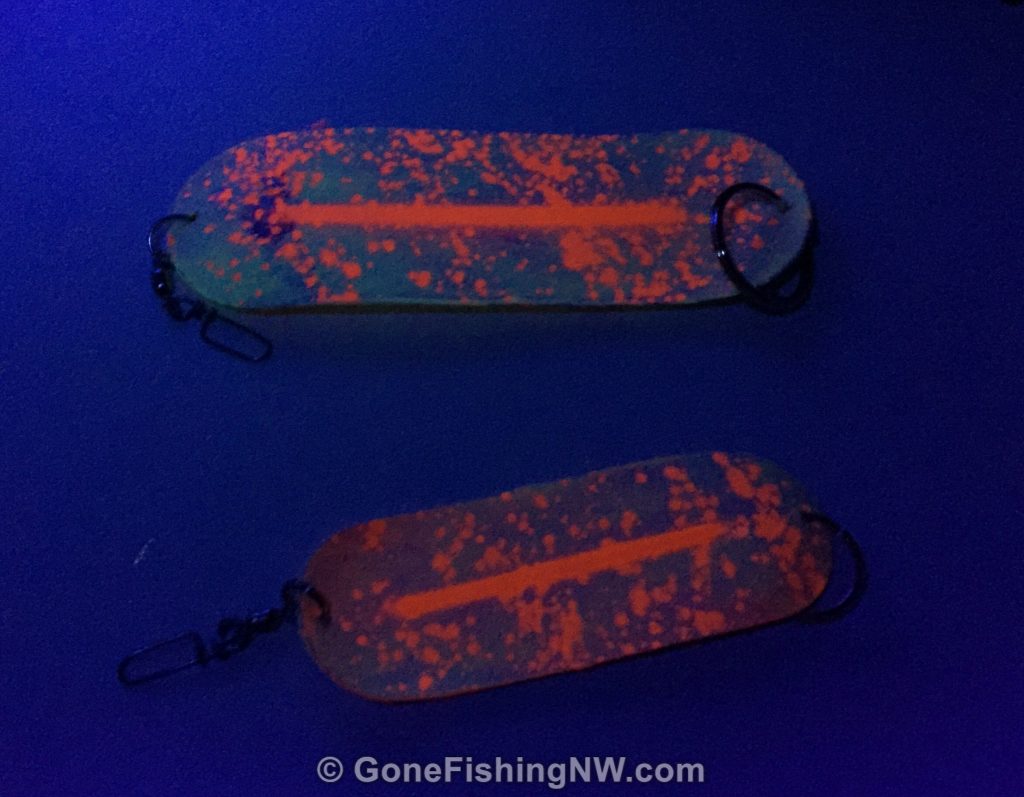 This is what it looks like when it glows.  When you are out on the water make sure to have a charge box to get your dodger and lure all charged up. 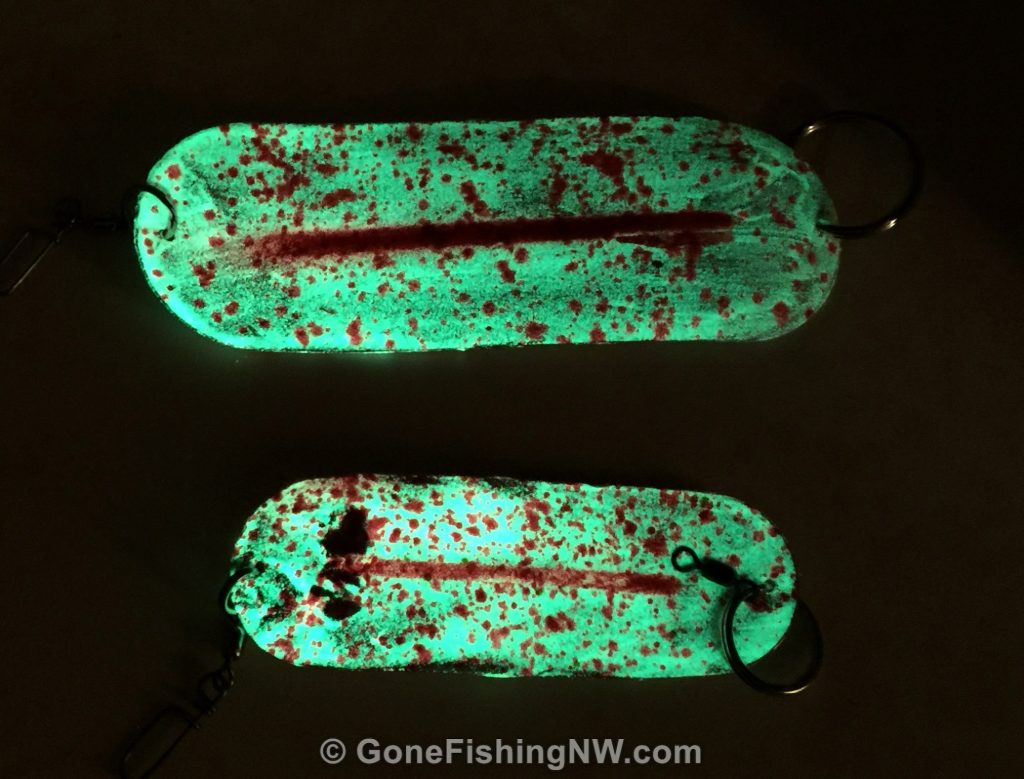 Building your own custom dodger is easy and fun.  It can also save you money, and let you create fishing tackle that is exactly how you want.