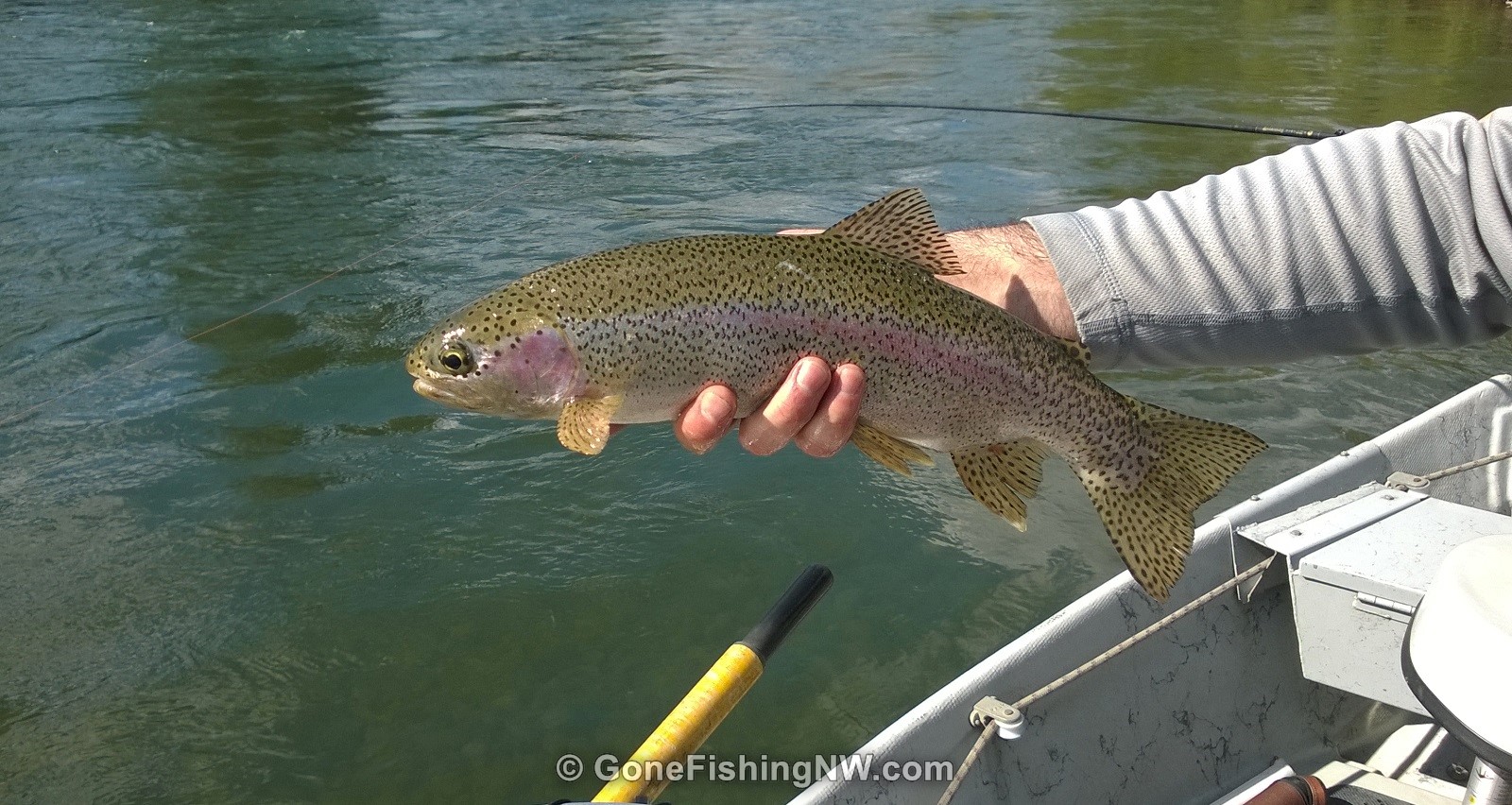 Last Christmas my friend Tracy and I bid on a fly fishing trip donated to the club by Ryan Smith of Avid Angler.  We managed to win it, and eventually scheduled the date.

The vast majority of my fly fishing experience is on stillwater.  When I do fish moving water it is mostly for salmon and steelhead with conventional gear.  Not only that, but this was my first guided fly fishing trip.  Needless to say I expected this to be quite the interesting experience.

We met Ryan at a café in Cle Elum, and after a quick chat we hit the road.  He led the way to the put in – Teanaway Junction – which was just south of the town of Cle Elum.

For those thinking about going down the river on our own, remember rivers can be dangerous places.  It is always best for the first time to be with someone who is familiar with the river.

He quickly got the boat loaded up and then in the river.  We hopped in and started our drift downstream.

Anchored next to a gravel bar, and got our rods all strung up and Ryan tied on some buggy looking flies.  He then walked us through how we were going to fish, and gave us some pointers with our casting.

Getting The Hang Of Things

We then started drifting down the river, fishing as we went.  We started using dry flies, and Ryan would point at likely spots where fish might be hiding.

The river had just recently dropped back into shape, so the flows were still on the high side.  We worked the areas of slower current, where there the bottom had some good rocks to help break up the flow of water.  We also targeted areas near logs and other structure.

During this time we didn’t see any fish action, but did tune in our casting and how to effectively fish out of the boat.  One of my problems which I experienced all day, was casting too far up stream – causing my fly to get too close to where Tracy was fishing.  Fortunately, this only led to a couple of tangles.

After a while we switched up the flies and added a nymph dropper off the dry fly.  A short while later we had our first strike – my dry disappeared under the water and I set the hook.  We saw a big flash in the water, then a couple head shakes and the fish came unbuttoned.  It felt like a good fish too.

I drifted my rig back through that water a couple more times and I was rewarded with a second strike.  This time I handled it better and we got it to the boat.  It was a nice rainbow which still had par marks on it.

After working that water a bit more, we resumed our drift downstream.  This time it was Tracy’s turn to hookup.  He played his fish well and was rewarded with a nice rainbow to the boat.

Then it was my turn again, hooking up another large fish.  When we got it to the net we discovered it was a huge whitefish.

We continued to work our way downriver, and around 1pm stopped for a nice break.  We anchored up in the shade and had lunch.  Ryan provided sub sandwiches, chips and cookies.  It was fun to just sit and talk as we ate.

We resumed, this time switching back to pure dry flies.  As the day warmed up we started having more action.

Tracy had brought his Tenkara rod and wanted to give it a shot.  Ryan had never had anyone use a Tenkara setup from the boat, but was willing to give it a try.  Simply put Tenkara is Japanese fly fishing.  It is different because there is no spool, instead the line is directly tied to the end of the rod.  The rods are really long (I believe Tracy’s was 13 feet) and the line doesn’t have as much weight as traditional fly line.  You don’t cast it so, much as just reach out and drop the fly where you want it.

For the rest of the day Tracy mostly used it.  With that long rod he was able to place his fly in small pockets.  He had several fish strike at his dry fly, but just wasn’t connecting on the hookset.

As we worked our way down stream we had several opportunities to hook fish, but due to slack line or delayed reactions there was a lack of solid hookups.  Still awesome to see fish come up and attack our flies.

Through the whole day Ryan was patient, and did a great job sharing advice on casting and fishing. He does it in a way that is helpful, and doesn’t feel like you are doing it wrong all the time – although I’m sure many of my casts made him cringe.

Along one piece of shoreline I didn’t like where my fly was, and started to pick it up to recast.  Just as I did that a fish swirled under the surface right where my fly was.  So I immediately cast back into that spot.  Maybe one second after the fly hit the water a fish (I believe a different one) smacked it hard.  I set the hook and it was Fish On!   A moment later a really nice rainbow leapt out of the water.  I maintained pressure, and got it near the boat.  I lifted and Ryan reached and we got it in the net.  A quick picture and he was back in the water.

Not only was it a great fish, but it was also my first ever on a dry fly.

End of the Day

A short time later we finished our ten-mile drift down the river, and arrived at the green bridge takeout.  Ryan’s truck had been shuttled down to the takeout, so we were quickly able to get it back on the trailer and put the gear away.

We rode with him back up to the put in, where Tracy and I got into his Jeep for the drive home.

The trip was a blast and I really enjoyed it.  It was nice to exercise some different muscles – both physical and mental – than my usual fishing.  Ryan was a great guide and someone I’d be happy to fish with again. I highly recommend him.